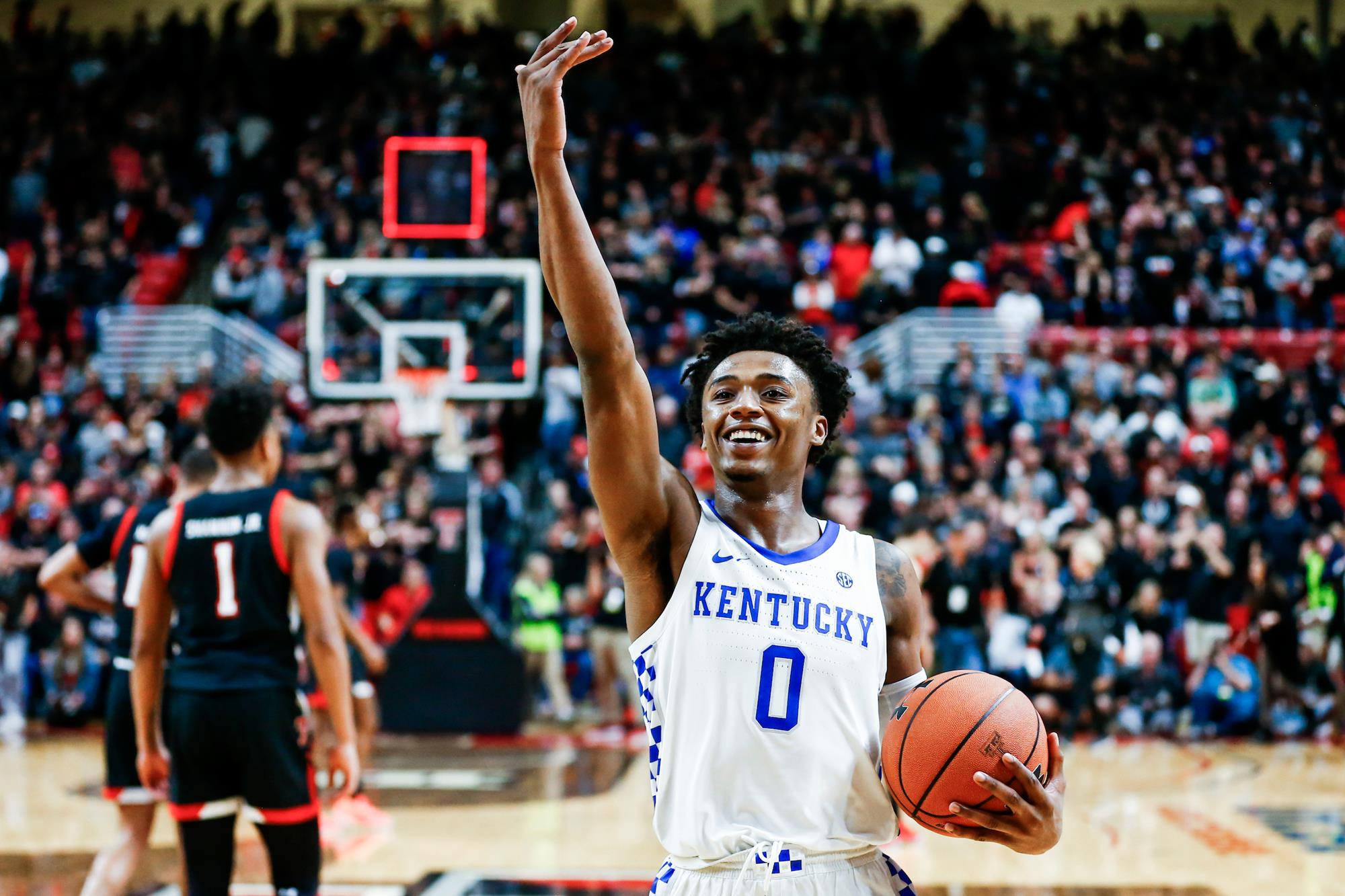 Hagans’ decision ends a spectacular two-year career at UK that saw him evolve from a defensive menace to one of the best point guards in the country in his second year.

“When I chose to come back for my sophomore year, I had some goals in mind,” Hagans said. “First was to win a national championship. You know it’s killing me that we didn’t get the chance to compete for one this season, but I understand why we couldn’t. But, just know, we would have been right there. The second thing we did, which was to win an SEC championship. I also wanted to become a better all-around point guard. My coaches and my teammates really helped me improve and now I know I’m ready to take the next step. 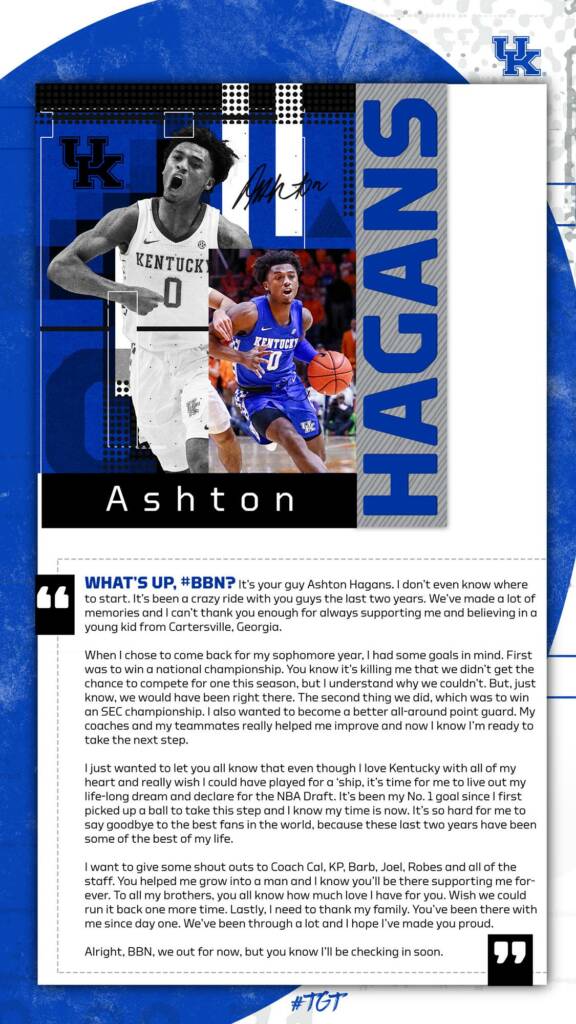 “I just wanted to let you all know that even though I love Kentucky with all of my heart and really wish I could have played for a ‘ship, it’s time for me to live out my life-long dream and declare for the NBA Draft. It’s been my No. 1 goal since I first picked up a ball to take this step and I know my time is now. It’s so hard for me to say goodbye to the best fans in the world, because these last two years have been some of the best of my life.

“I want to give some shout outs to Coach Cal, KP (Kenny Payne), Barb (Tony Barbee), Joel (Justus), Robes (John Robic) and all of the staff. You helped me grow into a man and I know you’ll be there supporting me forever. To all my brothers, you all know how much love I have for you. Wish we could run it back one more time. Lastly, I need to thank my family. You’ve been there with me since day one. We’ve been through a lot and I hope I’ve made you proud.”

The 6-foot-3 Kentucky guard was the consummate point guard in his sophomore season, doing a little bit of everything to affect the game. He averaged 11.5 points, 6.4 assists, 3.9 rebounds and 1.9 steals per game while grabbing the leadership reins of a talented but young team.

“Ashton is ready for this,” UK head coach John Calipari said. “From where he was when he got here two seasons ago to where he is now isn’t even close. He’s a completely different player and he’s built his skills and his confidence to take that next step.

“We know what Ashton can do to change the game defensively and how much better he got offensively, but what’s going to separate him is his competitiveness. That kid is a winner. His competitive spirit drives him and is why I love him. If I’m going to battle, I’m taking Ashton.

“I wish we could have had the opportunity to chase his goals of a championship this season but I’m so proud of who Ashton has become. I’m happy for him and his family and will be behind them the entire way.”

Hagans played in 67 career games for Kentucky with 59 starts. After starting off his career as a reserve, he broke through with an unforgettable defensive performance vs. North Carolina in December 2018. Hagans tied the single-game school record with eight steals while shutting down eventual NBA Draft first-round pick Coby White in the victory.

That performance sparked Hagans’ confidence offensively as well, as he would go on to score in double figures in 13 of the final 26 games to end his freshman campaign.

Hagans continued his evolution this season, boasting double-figure scoring in 20 games in 2019-20, including a career-high 26-point performance in the win over Utah Valley. He dished out three or more assists in every game he played this season and recorded five or more in 22 outings, including a career-high-tying 12 vs. UAB. His streak of 10 games with six or more assists midway through the season was the best run by a Wildcat since Roger Harden dished six or more in 12 straight in 1986.

With 351 career dimes, Hagans ranks 12th in program history in assists. His 5.24 career assist average ranks fourth in the school record book. Hagans’ assist average this season ranked 16th in the country and tops in the league.

With 119 swipes in 67 career games, Hagans averaged 1.776 steals per game for his career. That rate is third all-time in program history, trailing only Rajon Rondo and Derek Anderson.