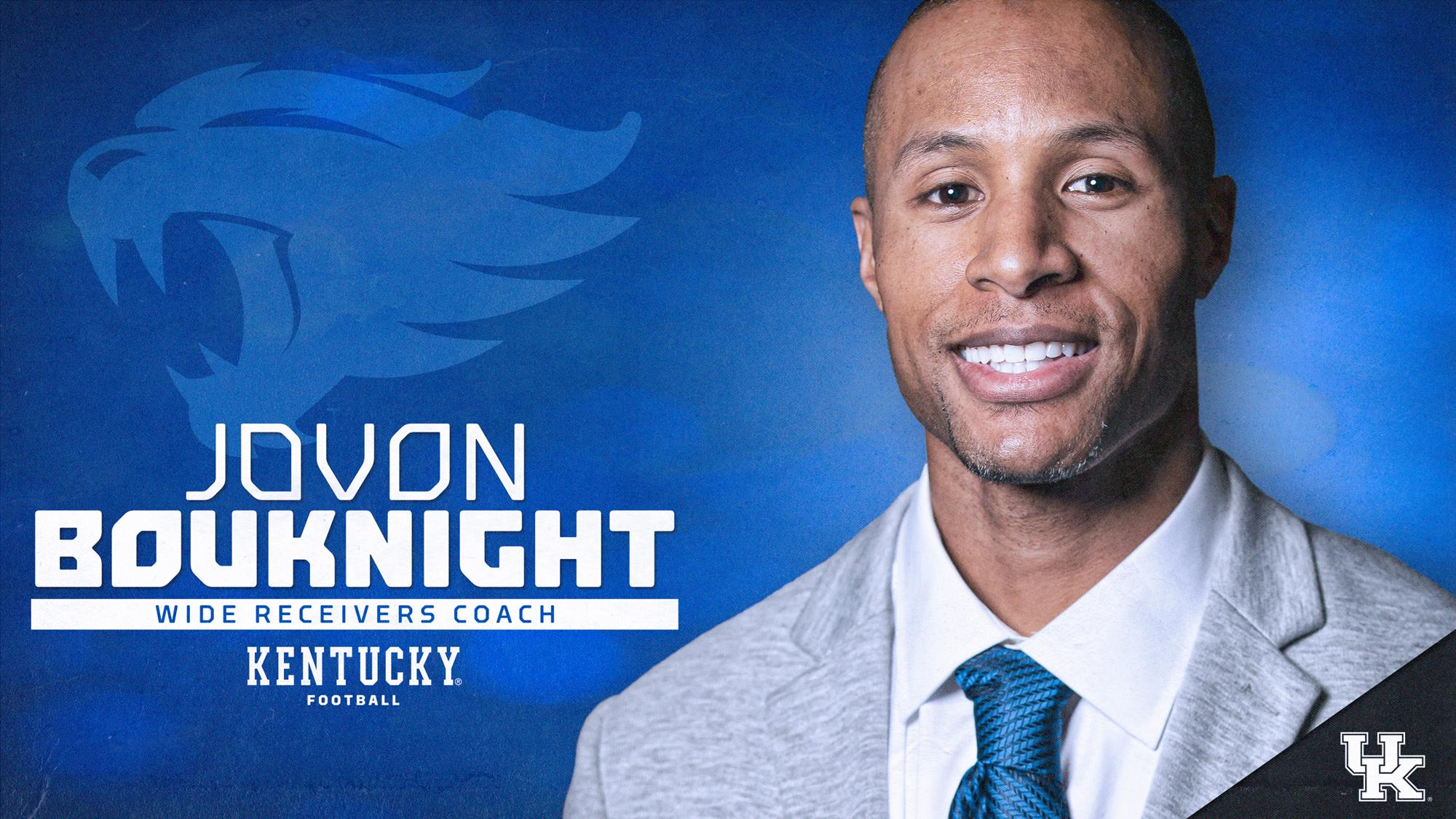 Bouknight comes to the Bluegrass after one season as the wide receivers coach at Oregon.

“I’m really excited about Coach Bouknight joining our staff,” head coach Mark Stoops said. “I had the opportunity to meet him on the recruiting trail and liked the way he handled himself. When I watched the tape of his games at Oregon and Utah State, it was evident his players play the right way and play with passion.”

“I have tremendous respect for this program and what Coach Stoops has done over the past seven years,” Bouknight said. “I’ve watched as Kentucky has gone to four straight bowl games, finished in the top 25 nationally and how they’ve excelled in recruiting. I met Coach Eddie Gran on the road, we built a relationship and I’m excited to be a part of this coaching staff. I really love the direction of the program and where it’s headed.”

At Oregon, Bouknight’s receiving corps was an integral part of the Ducks’ 12-2 season that included a Pac-12 Championship and a Rose Bowl victory over Wisconsin. His squad improved the overall offensive output in his lone season, going from 246 catches, 3,222 receiving yards and 29 touchdowns in 2018, to 298 catches for 3,615 yards and 35 touchdowns in 2019. Johnny Johnson III, Oregon’s leading receiver, had a breakout season under Bouknight’s tutelage, improving from 17 catches, 215 receiving yards, 12.9 yards per reception and four scores in 2018 to 57 catches, 836 yards, 14.7 yards per reception and a team-high tying seven touchdowns in 2019.

Prior to Oregon, Bouknight spent three months at Texas Tech before taking the same position with the Ducks. The majority of Bouknight’s career was spent at Utah State, where he coached for 10 years primarily focusing on working with the wide receivers. He was also the co-offensive coordinator in 2016 and the passing game coordinator for two seasons from 2014-15.

His tenure at Utah State coincided with the program’s most-successful stretch in school history as the Aggies reached seven bowl games in a span of eight years and claimed the 2012 Western Athletic Conference title. Utah State had only six bowl game appearances in its history and none since 1997 prior to his arrival in 2009.

In 2018, Utah State finished second in the nation in scoring offense (47.5), while equaling the program record for wins (11) and the Mountain West record for points in a season (618). Bouknight’s wide receiver group helped the Aggies lead the country with 29 scoring drives that lasted under a minute while leading the Mountain West and ranking 11th nationally in total offense (497.4). Utah State reached as high as No. 13 in the Associated Press Poll during the season, good for the program’s best ranking since 1961.

Bouknight coached several of Utah State’s top receivers in its history, highlighted by wideout Hunter Sharp, who led the Mountain West with nine receiving touchdowns as a senior in 2015. Sharp also finished second in the Mountain West and 19th in the FBS with 71 receptions that season and third in the league with 76.3 receiving yards per game.

Bouknight was a standout wide receiver at Wyoming, where he concluded his career ranked 20th all-time in NCAA history for both career receiving yards (3,626) and career receptions (250). He also ranks second all-time in Mountain West history in each of those two categories.

One of the top wide receivers in Mountain West history, Bouknight remains one of Wyoming’s top pass catchers and is still the school’s all-time leader in both all-purpose yards (5,921) and kickoff return yards (2,016). He also ranks second in career receptions and third for receiving yards after catching at least two passes in all 47 games of his collegiate career. That streak remained a Wyoming record up until 2014.

Bouknight was among the nation’s best receivers as a senior in 2005 as he was named one of 15 semifinalists for the Biletnikoff Award. He also earned honorable mention All-America honors from College Football News and first-team All-Mountain West accolades after hauling in 1,116 yards through the air. He ended that season ranked ninth in the FBS for average receiving yards per game (101.5), 10th in all-purpose yards per game (160.45), 11th in kickoff return average (27.75), 12th in average receptions per game (7.0) and 15th in total receiving yards.

A native of Denver, Colorado, Bouknight, 36, received his bachelor’s degree in kinesiology and health promotion from Wyoming in 2006. He is married to Jeanine Hernandez, a former Utah State softball student-athlete. The couple has one son, Breeze, and one daughter, Brené.