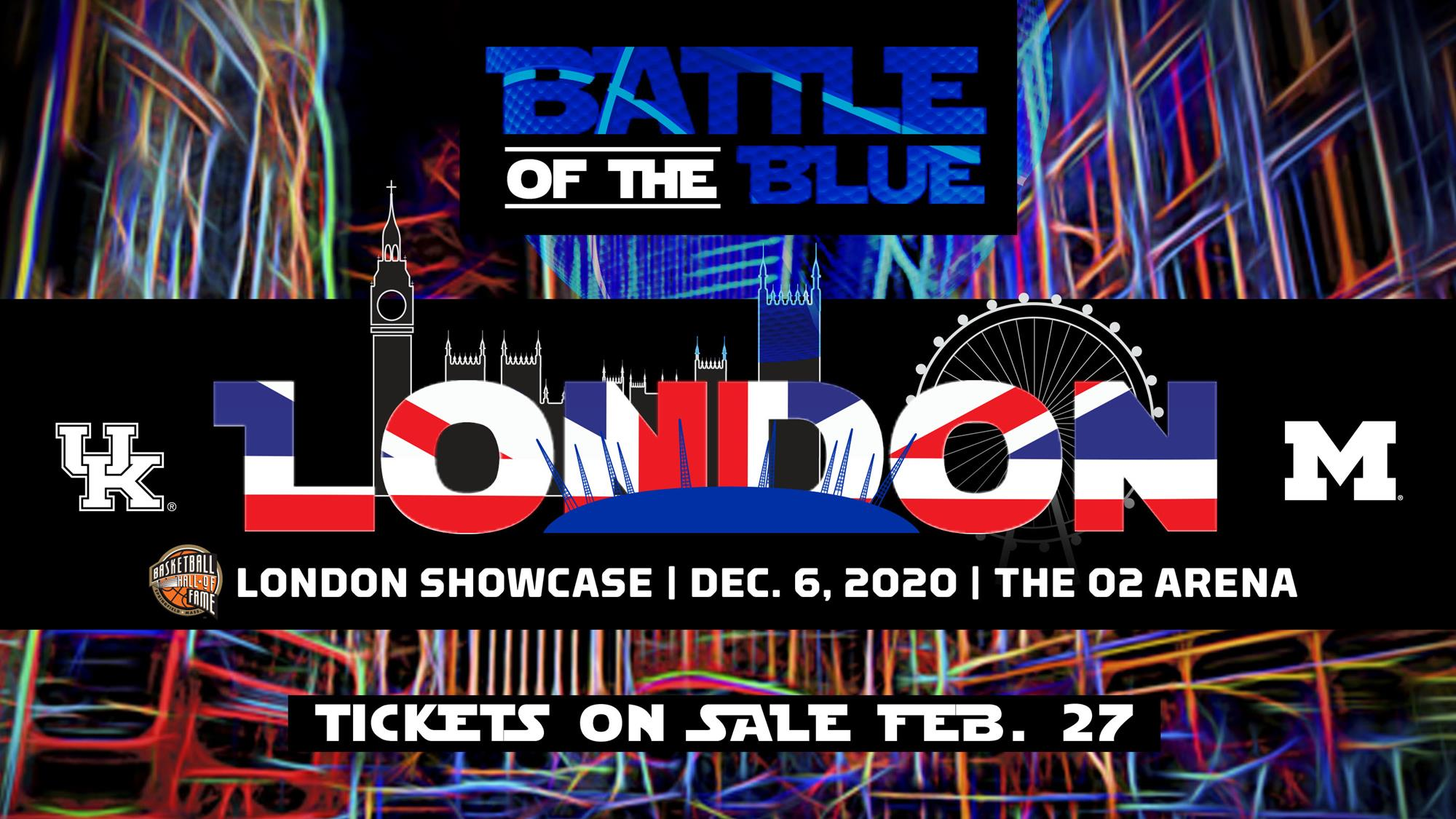 LONDON – The-much anticipated Kentucky men’s basketball game vs. Michigan in London – the Basketball Hall of Fame London Showcase – has been set for Dec. 6 with tickets slated to go on sale Feb. 27 at 5 a.m. ET (10 a.m. GMT) online through AXS.com and The O2 Arena.

UK recently signed a three-year deal with Michigan that will take the Wildcats to London this December and add a marquee home-and-home series for the following two years.

Beginning with the Dec. 6 trip to The O2 Arena in London in December of 2020, the Wildcats and Wolverines will play three consecutive seasons. UK will travel to Ann Arbor, Michigan, for the Dec. 4, 2021 game, and Kentucky will host Michigan in Rupp Arena on Dec. 3, 2022.

The first year of the three-year commitment will be hosted by the Naismith Memorial Basketball Hall of Fame and serve as a fundraiser for the Hall. The UK-Michigan and Marist-UMBC games – taking place prior to the Kentucky game – will be the first NCAA Division I college basketball games in The O2 Arena.

“This series with Michigan checks off a lot of boxes when we’re looking at teams to schedule,” UK head coach John Calipari said. “The first thing is, to add an opponent like Michigan and to do so at a point in the schedule where we’re beginning to find out who we are as a team will be important in our development.

“And then to be able to do something different – to be first, which our fans know we love to do – and play this first game in London will be an unforgettable experience for our players and for our fans. I know our fans will show up in full force. The Naismith Memorial Basketball Hall of Fame always puts on a first-class event and I expect this will be the same.”

Of course, fans are encouraged to join the Wildcats in London. K Fund members interested in the exclusive team travel package, including an international charter flight from Cincinnati, a four-night hotel stay and game tickets, may email Elizabeth Briggs at Elizabeth.Briggs@uky.edu for more information.

General public tickets, which will go on sale Feb. 27 at 5 a.m. ET (10 am. GMT) will be priced between £35 to £200 (approximately $45 to $260) and will include entry into both games of the doubleheader. Limited floor and VIP seating may also be available. Everyone will require a ticket, regardless of age. All tickets will be delivered in the O2 app through flash mobile delivery. All tickets will be sold on a first-come, first-served basis, while supplies last.

“The Basketball Hall of Fame is proud to celebrate the game on a global scale and we couldn’t be more excited to host four Division I men’s teams in London this December,” said John L. Doleva, President and CEO of the Basketball Hall of Fame. “The O2 is a beautiful, world-class venue and we expect many U.S.-based fans will make the trip to enjoy its amenities and support their teams abroad. We’re also looking forward to showcasing collegiate hoops to the local fans and growing the appreciation for basketball at all levels worldwide.”

UK has played internationally on a number of occasions for foreign exhibition tours, but the game in London will mark Kentucky’s third regular-season trip outside the U.S. but first in Europe.

The Wildcats defeated Cleveland State and Stanford in Mexico in the Cancun Challenge in November 2009 and most recently beat Arizona State in the Bahamas in November 2016.

The 2020 game won’t carry quite the stakes as the 1948 Olympics, but it begins a significant series against a tradition-rich program.

Michigan has been one of the most successful programs over the last 10-plus seasons. Beginning with the 2009-10 season, when Calipari took over at Kentucky, Michigan has won 19 NCAA Tournament games, appeared in two Final Fours, three Elite Eights, five Sweet 16s, and has captured two Big 10 regular-season championships and three conference tournament titles.

The Wolverines are led by first-year head coach Juwan Howard. The Michigan legend was a key member of the famed “Fab Five,” considered one of the best recruiting classes of all-time, and helped lead the Wolverines to back-to-back Final Four appearances in 1992 and 1993.

Howard took the reins of the program this season after former head coach John Beilein moved to the NBA. That’s where Howard spent his previous six seasons and last five as an assistant with the Miami Heat. He played 19 seasons in the NBA.

UK leads the all-time series with Michigan 5-2. The most memorable matchup of the bunch – at least in the eyes of Big Blue Nation – was the most recent in March 2014 in Indianapolis. The Wildcats edged the Wolverines 75-72 in a classic in the Elite Eight. Aaron Harrison hit the second of three straight game-winning 3-pointers to advance UK to the Final Four.

Howard’s Wolverines knocked off Kentucky 81-78 in overtime in the 1993 Final Four to advance to the national championship game.

The on-campus visits in 2021 and 2022 will mark the first in the series since UK’s 1970 trip to Ann Arbor and the 1968 UK Invitational Tournament in Memorial Coliseum. The series is tied 1-1 in Lexington, but the Wildcats lead Michigan 2-0 in Ann Arbor and 2-1 at neutral sites.