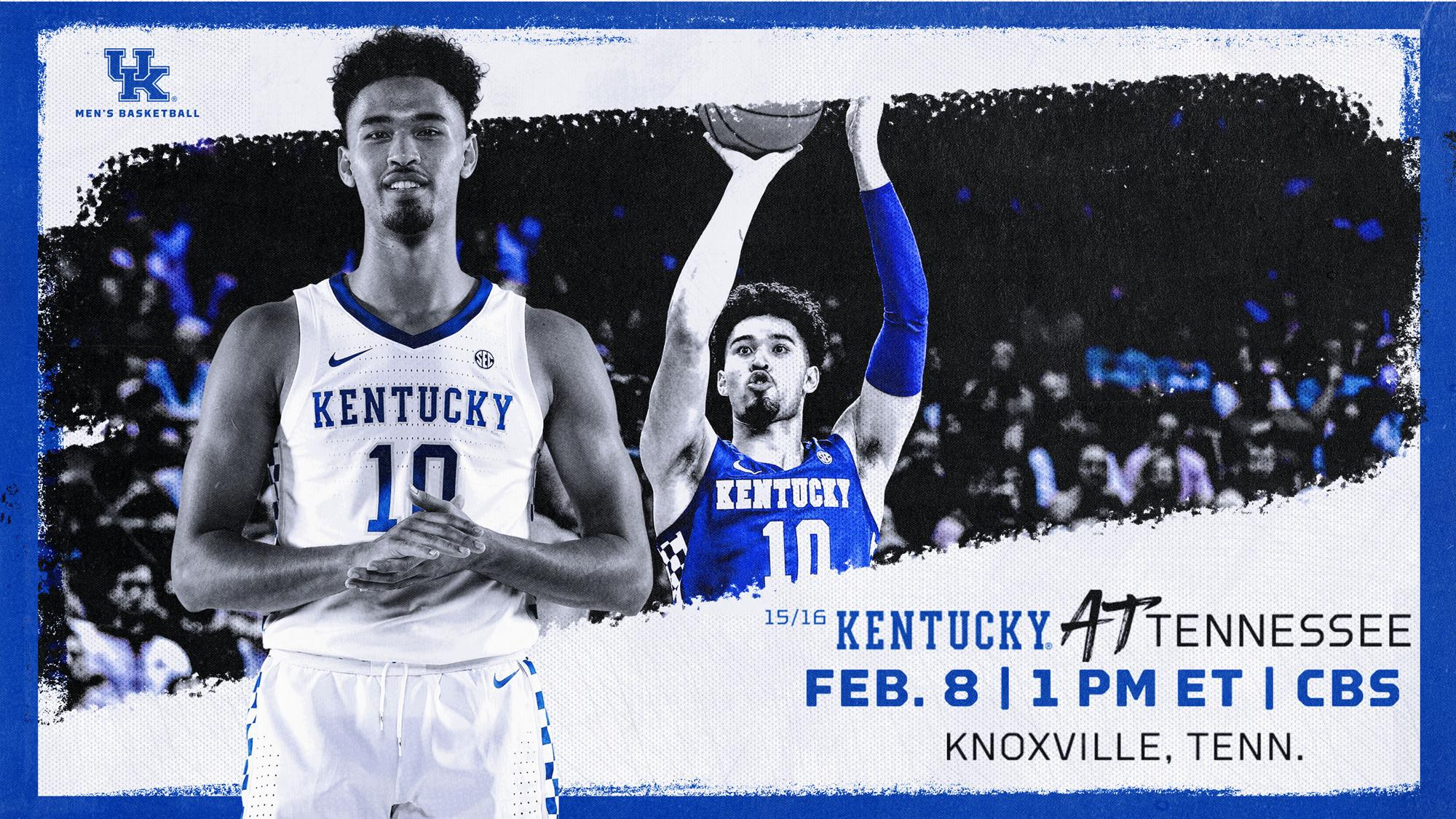 Cats Prepared for Another Hostile Environment at Tennessee

Kentucky has developed a Saturday routine, but it doesn’t have anything to do with sleeping in, brunch or knocking items off a to-do list around the house.

The Wildcats have grown accustomed to waking up in a hotel and preparing to play a game in a hostile road environment.

“I think road games are probably the funnest for me,” Quickley said. “Being at Rupp and being with these fans is really cool – best fans in the world – but just to be on the road when everybody’s cheering against you, it’s just your 12 guys in the court and on the coaching staff and everybody else is cheering against you.”

For the fourth Saturday in a row, No. 15/16 UK (17-5, 7-2 Southeastern Conference) will take on the challenge of ruining the weekend for an opponent and its fans. This time, the Cats will travel to Knoxville, Tennessee, to take on the Tennessee Volunteers (13-9, 5-4 SEC) at 1 p.m.

“Teams are really close, not too far, like three hours down the road,” Quickley said. “Tennessee, I’m sure their fans will be there screaming and yelling. One of my favorite places to play, honestly, since I’ve been here.”


Quickley has plenty of experience on that front, including each of the last three Saturdays when UK has faced Arkansas, Texas Tech and Auburn in hostile road environments. The Cats are 2-1 in those games after falling short at Auburn last weekend and John Calipari knows their next such opportunity will be a challenge.

“Anytime I’ve been in that building, it’s packed and it’s like a game and it’s a significant game,” Coach Cal said. “This one will be.”

At both Memphis and now Kentucky, Calipari has become familiar with Thompson-Boling Arena – the fourth largest in college basketball in capacity. He is 3-6 there as UK’s head coach, losing the last four straight. Included in that is a game last year Tennessee won by 17 points to avenge a loss at Rupp Arena by the same margin two weeks prior.

“On the last play of the game, Admiral Schofield had dunked and the crowd had just went crazy,” Quickley said. “It was almost like Arkansas where you had to put your hands in your ears because it was so loud. Hopefully this year we can rewrite that story going down there a little bit. Like I said, it’ll be fun just to get in a good atmosphere and compete.”

Another two weeks after that game, the two teams played an Elite Eight-level game in the SEC Tournament semifinals, with Tennessee eking out an 82-78 win. Of course, the two teams look a lot different than they did a year ago.

Kentucky is led by returners Quickley, Ashton Hagans, Nick Richards and EJ Montgomery, but they are hardly the same players in stepping up to fill the void left by the likes of PJ Washington, Reid Travis, Tyler Herro and Keldon Johnson. Tennessee, meanwhile, has a brand-new starting five with the departure of Schofield, Grant Williams, Jordan Bone and Kyle Alexander and the loss of Lamonte Turner to injury in December.

Even so, Calipari knows too much about his good friend Rick Barnes to have anything but respect for the Volunteers.

“They’re a physical team,” Calipari said. “They play well. They’re well coached. They run their stuff. Defensively, they’ll grind you. They’ll press you. They’ll deny you. He does a little bit of everything. It’ll be a hard challenge for us.”

But for all the talk about the history with Tennessee, UK’s Saturday routine won’t be any different than it has been each of the last three weeks. An entire town might be buzzing ahead of their arrival once again, but the Cats are zeroed in on what they need to do.

LEXINGTON, Ky. – Challenged by coach John Calipari to be tougher, Kentucky made its presence felt against Mississippi State. Especially Nick Richards, who took the criticism and asserted himself on both ends of the floor.

Richards scored a career-high 27 points, including 25 in the second half, Immanuel Quickley added 21 and EJ Montgomery emerged with a strong 12-point, eight-rebound outing as No. 15/16 Kentucky beat Mississippi State 80-72 on Tuesday night for its 14th consecutive victory over the Bulldogs.

Seeking to regroup after last weekend’s 75-66 loss at No. 11 Auburn, the Wildcats (17-5, 7-2 Southeastern Conference) never trailed and led by as many as 14 midway through the second half. They were quicker and more physical against the Bulldogs, outscoring them 38-34 in the paint and 25-8 on the break.

Kentucky also drew fouls and made 31 of 36 chances from the line, including its final 16 in the closing minutes.

After totaling just seven points and seven rebounds on Saturday, Richards bounced back big by making 7 of 10 from the field and grabbing 11 rebounds for his 10th double-double this season. The 6-foot-11 junior shook off 1-for-4 shooting in the first half to hit all six attempts in the second half and 13 of 15 free throws.

“He’s really one of the dominant bigs in all of college basketball,” Howland said of Richards. “The way he shoots the ball, his foul shooting was tremendous. I thought they did a good defensively protecting the paint.”

Quickley offset 3-of-11 shooting to make all 14 from the line and tie a school record for most free throws without a miss. He made eight in the last minute as Mississippi State tried to extend the game.

Montgomery added 12 points to score in double figures for the first time in five games and had eight rebounds, his highest total since grabbing 10 against Utah in December. Montgomery also had three of Kentucky’s seven steals.

“What EJ did is what my vision for him is,” Calipari said. “Notice that he didn’t take many jump shots and the ones he did, he missed. Everythingelse was at the rim. He squared up and drove the ball and that’s all we’ve been trying to get him to do.”

D.J. Stewart Jr. and Robert Woodard II each had 15 points and leading scorer Reggie Perry 14 points for Mississippi State, which outreboundedKentucky 40-37 but shot just 36.8% and 31.3% from long range. The Bulldogs lost for just the second time in seven games.

• Kentucky has won 12 straight home games and is 13-1 in Rupp Arena this season
• UK’s 14-game winning streak over Mississippi State is tied for its longest active winning streak vs. an SEC school (also 14 vs. Georgia)
• It was Kentucky’s first victory in five games this season when being outrebounded
• UK improved to 198-19 (.912) under Calipari when keeping the opponent at 40% or less, including 11-3 this season.
• Entering the game at 77.7% at the foul line, the Wildcats had another solid performance at 86.1% (31 of 35). It is UK’s fourth straight game shooting 80% or better
• Kentucky led by as many as 14 points during the game. UK is 277-7 under Calipari when leading by at least 10 points during the game.
• UK improved to a 10-1 record under Calipari when making one or fewer 3-pointers
• It’s the second straight game that UK had two players score at least 20 points. Quickley and Maxey scored 20-plus each at Auburn
• Richards’ 25 second-half points are the fourth-most points in a half in the Calipari era
• UK improved to 4-0 this season when Montgomery reaches double figures.

Historically, Knoxville has Served as Predictor for NCAA Tournament Success

If you’re into historical trends, Kentucky’s success in Knoxville, Tennessee, has had a peculiar tie with the Wildcats’ NCAA Tournament success. Quite simply, a win in Knoxville traditionally spells success for UK in March.

Kentucky has never won an NCAA championship without first winning in Knoxville during the regular season. And during the John Calipari era, the Wildcats have never advanced to a Final Four without a win in the land of the Volunteers.

The lone wins in the Calipari era: One came with Brandon Knight and Co. in 2011 in which the Cats advanced to the Final Four. The next one came in 2012 and resulted in UK eventually cutting down the nets. Kentucky’s last win in Knoxville was during the 2015 season when UK went 38-1 and made a Final Four appearance. Kentucky’s other Final Four march under Calipari came in 2014. However, the squads did not have a home-and-home during that season and the Wildcats never made the trip south of the border.

Saturday will mark the 229th all-time meeting between border-state rivals. UK has played the Volunteers more than any other opponent in school history and owns a 155-73 all-time record against the Volunteers.

In a sign of the recent competitiveness of the series, Saturday’s matchup will mark just the second time in the last seven meetings where both opponents aren’t ranked at the time. While UK is ranked No. 15 in this week’s Associated Press Top 25, Tennessee sits outside the polls