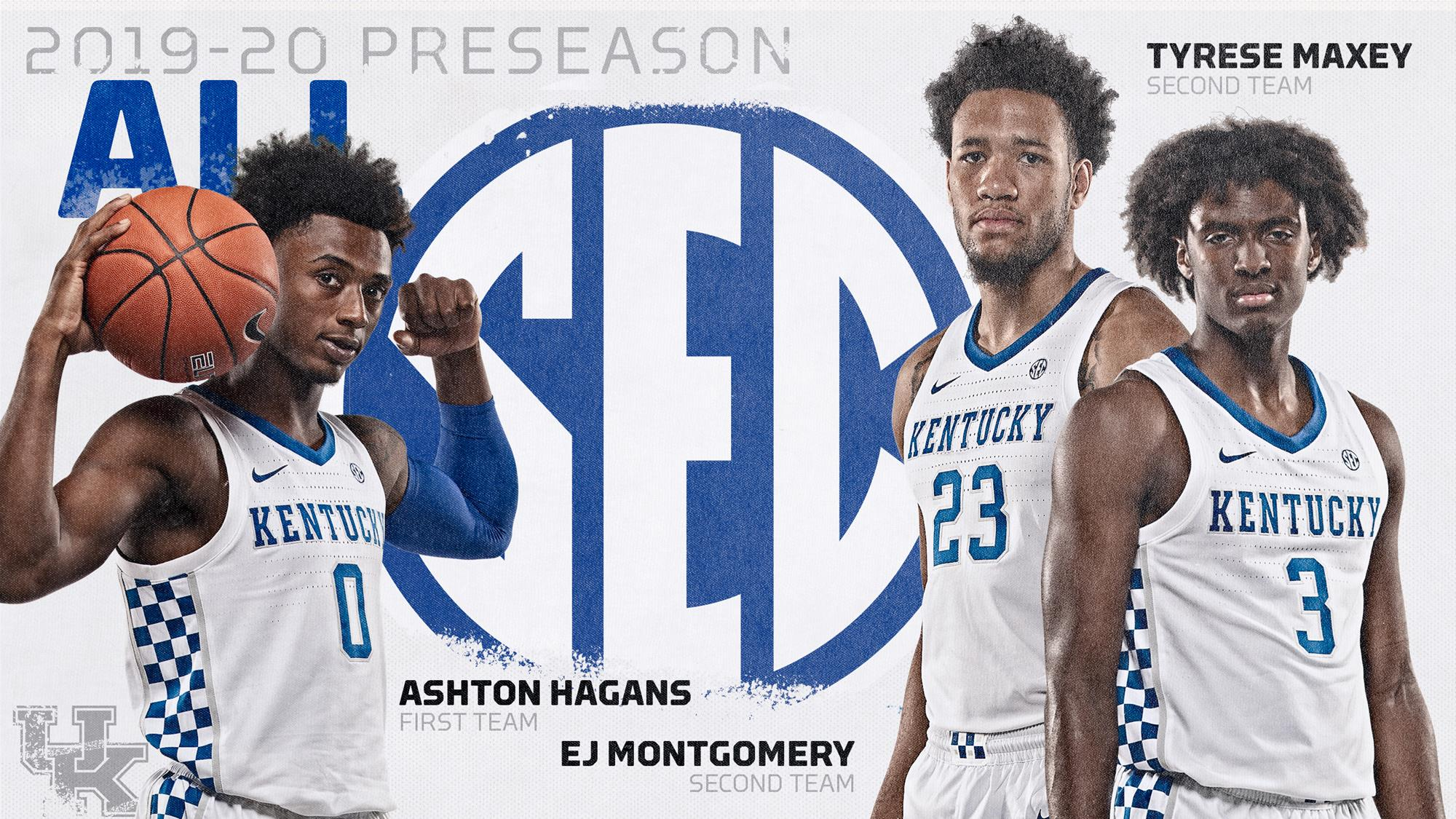 BIRMINGHAM, Ala. – Eleventh-year head coach John Calipari has often described Kentucky as the hunted within the ranks of the Southeastern Conference. With more regular-season and tournament titles than the entire league combined, it’s not a far-fetched mantra. If the 2019-20 preseason media poll conducted by the league’s media proves true, Kentucky will once again be the pursued.

Each school selected media members that cover their team and additional media from across the nation were selected by the conference office to comprise the voting panel. Points were compiled on a 14-13-12-11-10-9-8-7-6-5-4-3-2-1 basis. Each media member also voted for two All-SEC teams. 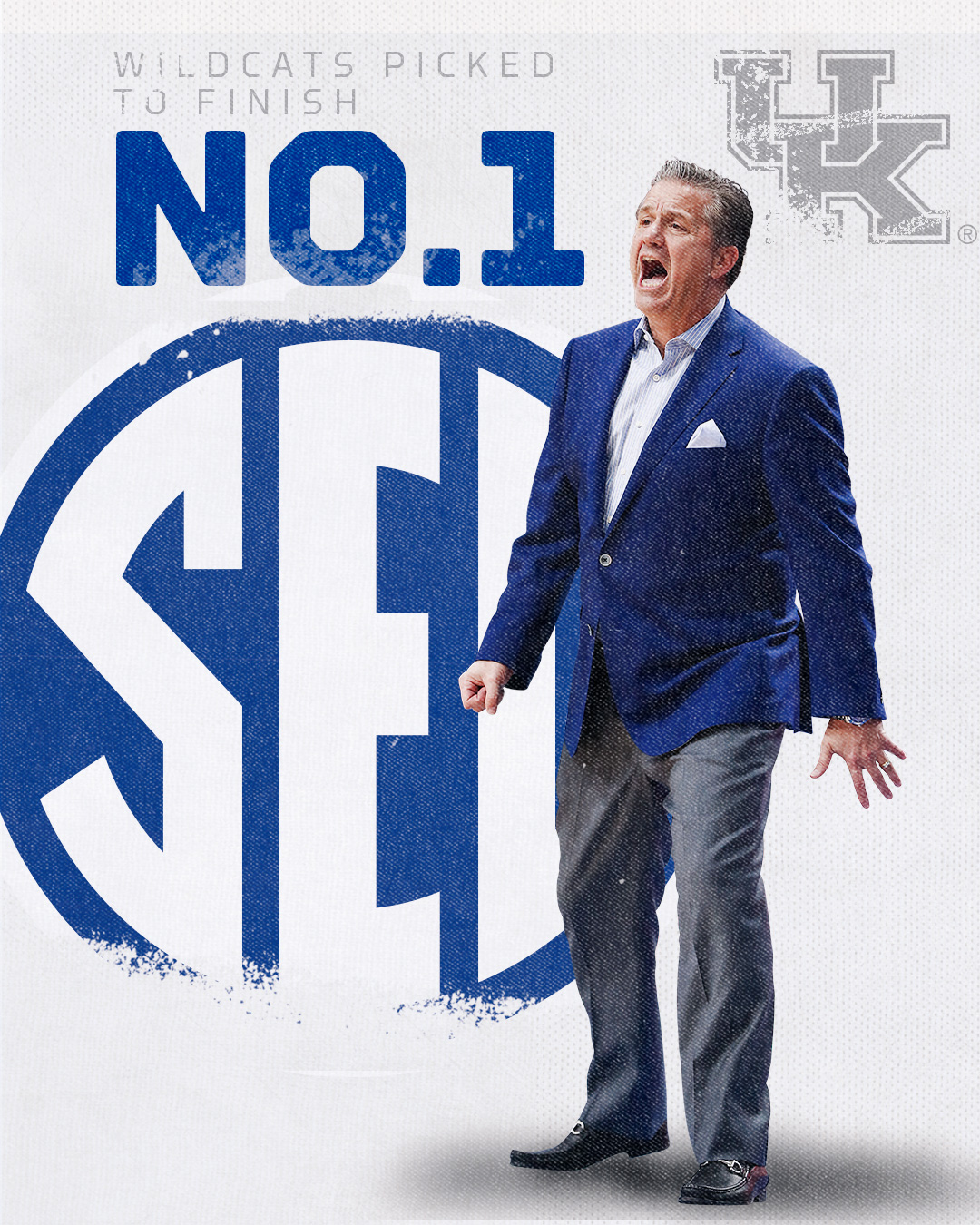 In addition to the preseason poll, three players were selected to the preseason All-SEC squads. Sophomore guard Ashton Hagans was picked to the first team, while freshman guard Tyrese Maxey and sophomore forward EJ Montgomery were tabbed to the second team. Hagans also received at least one vote for the preseason pick for SEC Player of the Year.

Hagans shared the 2019 SEC Defensive Player of the Year award after inducing 61 steals during his freshman campaign and is considered one of the best on-ball defenders in college basketball. He is also UK’s leading returning scorer at 7.7 points per game. The 6-foot-3 guard was a two-time SEC Freshman of the Week award winner, was named to The Athletic’s All-Glue Team and was a Naismith National Defensive Player of the Year semifinalist.

He started in 30 of 37 games a season ago and tied Shai Gilgeous-Alexander for the third-most steals in program history. Included in that was a UK single-game record of eight swipes in a win over North Carolina in December, which matched Rajon Rondo and Wayne Turner’s output. He also dished out 160 assists on the season, ranked the fifth most by a UK freshman in school history. That mark includes an SEC Tournament-record 12 assists in the semifinals against Tennessee.

Maxey begins his freshman campaign with the Wildcats as the No. 10 overall prospect by the Recruiting Services Consensus Index. He was a Naismith High School Boys’ 2019 All-America Second Team selection. As a senior at South Garland High School, he averaged 22.2 points, 6.3 rebounds, 3.6 assists and 1.7 steals per game.

Montgomery elected to return for his sophomore season after considering a jump to the pro ranks following positive feedback from the NBA. He appeared in all 37 games for the Wildcats during his freshman season, including making 10 starts. He started in nine of UK’s final 11 games and the Wildcats were 9-1 during that stretch.

He’s UK’s leading returning rebounder at 4.1 boards per game. He also averaged 3.8 points per game and shot with a 48% rate from the field. His 38 blocks ranked third on the team and led the team in the category in 14 games. His best game of the season came with career highs in points (11) and rebounds (13) in a win over South Carolina. He also snared 11 boards in his NCAA Tournament debut against Abilene Christian.