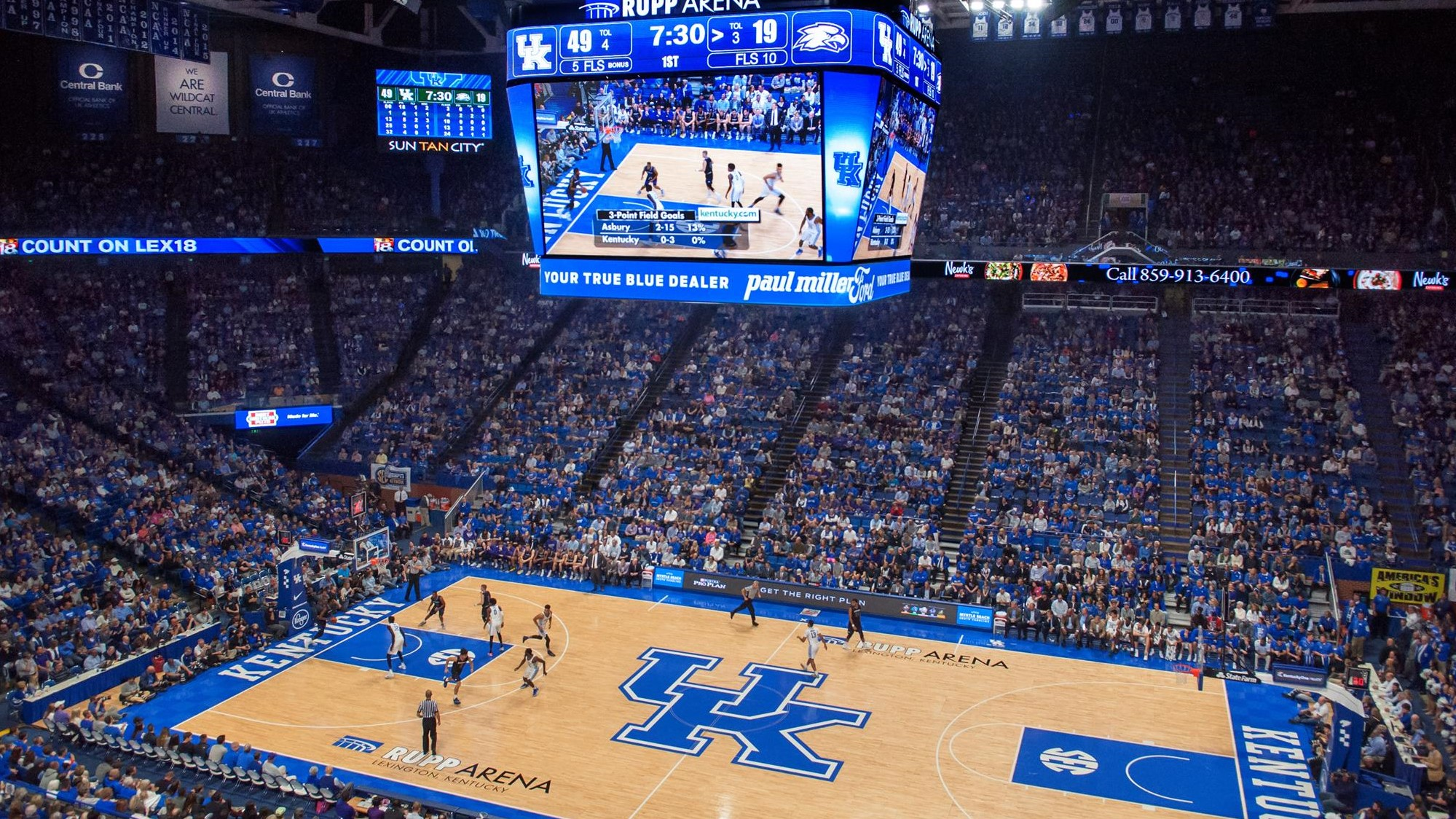 LEXINGTON, Ky. – UK Athletics has announced season ticket information for the 2019-20 men’s basketball season, introducing a pricing model that creates additional options for fans after a renovation will bring sideline chair-back seating to the upper level in Rupp Arena.

“Meeting our top priority at the outset of this renovation, we will maintain seating to accommodate all of our existing season ticket holders next season,” Athletics Director Mitch Barnhart said. “Additionally, we took this opportunity to complete a comprehensive review of our season ticket inventory and pricing to make sure we are creating options that meet the needs of our fans. We are excited to see those fans, the best in America, cheering on their Wildcats again next season in Rupp.”

Decisions regarding season ticket pricing and inventory are made through a normal annual review process. This season, UK worked with Ticketmaster’s LiveAnalytics team to analyze historical ticket sales data to help determine the relative value of each section and seating area in order to adjust appropriately for demand in pricing.

The result of that annual review process and collaboration with Ticketmaster is a new model with seven different pricing levels in the upper level of Rupp Arena. This pricing adjusts for the new chair-back seating set to be installed in the upper level this summer.

Bleachers in sideline sections 228-234 and 211-217 will be completely removed and replaced with chair-back seating, answering long-standing fan feedback asking for more comfortable seating in the upper level. There will be four pricing levels in sideline chair-back sections, with base ticket prices ranging from $1,150-$1,400, depending on seating location. The majority of seating in these areas will not have annual per-seat K Fund donations attached, with the exception of the first nine rows of sections 213-214 and 231-232 and the first five rows of sections 212, 215, 230 and 233.

Total annual cost for 64 percent of upper-level season tickets – including four of seven pricing levels – will actually decrease from 2018-19 in this new model. All season tickets in areas where bleacher seating will remain in place will decrease by at least 10 percent. These lower price points have been created in order to provide added flexibility and choice for season ticket holders.

Note: The six-percent sales tax on event tickets levied last year by the state of Kentucky has been repealed and is no longer included in ticket prices. All pricing increases and decreases referenced compare the total out-of-pocket cost for the 2018-19 season and the upcoming 2019-20 season, when sales tax will not be levied.

As the lower-level seating areas are not affected by the installation of chair-back seating in the upper level, lower-level ticket prices are not significantly changed from last season. Per-ticket prices in sections 11-44 are either $1,400 or $1,500 with corresponding annual per-seat K Fund donations ranging from $1,000 to $5,000. Total per-ticket costs in the lower level will increase by 1-4 percent.

The top priority throughout this process has been to maintain seating for all current season ticket holders in a newly renovated Rupp Arena. UK Athletics is pleased to report that this will be the case now that upper-level seat selection is fast approaching.

With chair-back seating to be installed in the upper-level sidelines of Rupp Arena for the first time, all fans in the upper level will participate in a new seat selection process beginning next month. The order in which fans will select seats will be determined based on K Fund priority point ranking as of Feb. 1, 2019. Season ticket holders also received bonus K Fund points based on years of consecutive purchase of men’s basketball season tickets as a reward for their loyalty. Lower-level season ticket holders will not participate in this new seat selection process, as their seating areas are unaffected.

No payment is required at the time seats are selected. In July, the UK Ticket Office will post season ticket renewal invoices online and send them by mail, after selections are complete.

Chair-back seating in the upper-level sideline will be installed in sections 211-217 and 228-234 through a project that will be completed prior to the start of the 2019-20 season. This project is being undertaken in response to years of feedback from fans asking for more comfortable seating in the upper level. Construction will begin this summer.

In addition to new chair-back seating in the upper level sidelines, the renovation will bring new club areas to Rupp Arena for the first time. Construction on the new club areas began last July. Fans in these new clubs will be able to enjoy first-class amenities before, during and after games. These new clubs are crucial to providing the funds necessary for both the new lease agreement and the ongoing renovation of Rupp Arena.

The installation of these new clubs is independent of the project to install chair-back seating in the upper level. These clubs will result in no seating changes in either the upper or lower level.

The in-progress changes to the interior of Rupp Arena are part of a $241 million construction of the new Lexington Convention Center by Messer Construction Company. The design, in addition to overhauling the exterior of the facility, includes 100,800 square feet of exhibit halls, a 25,185 square-foot ballroom, 30,270 square feet of flexible meeting spaces and 110,234 square feet of pre-function and circulation space.