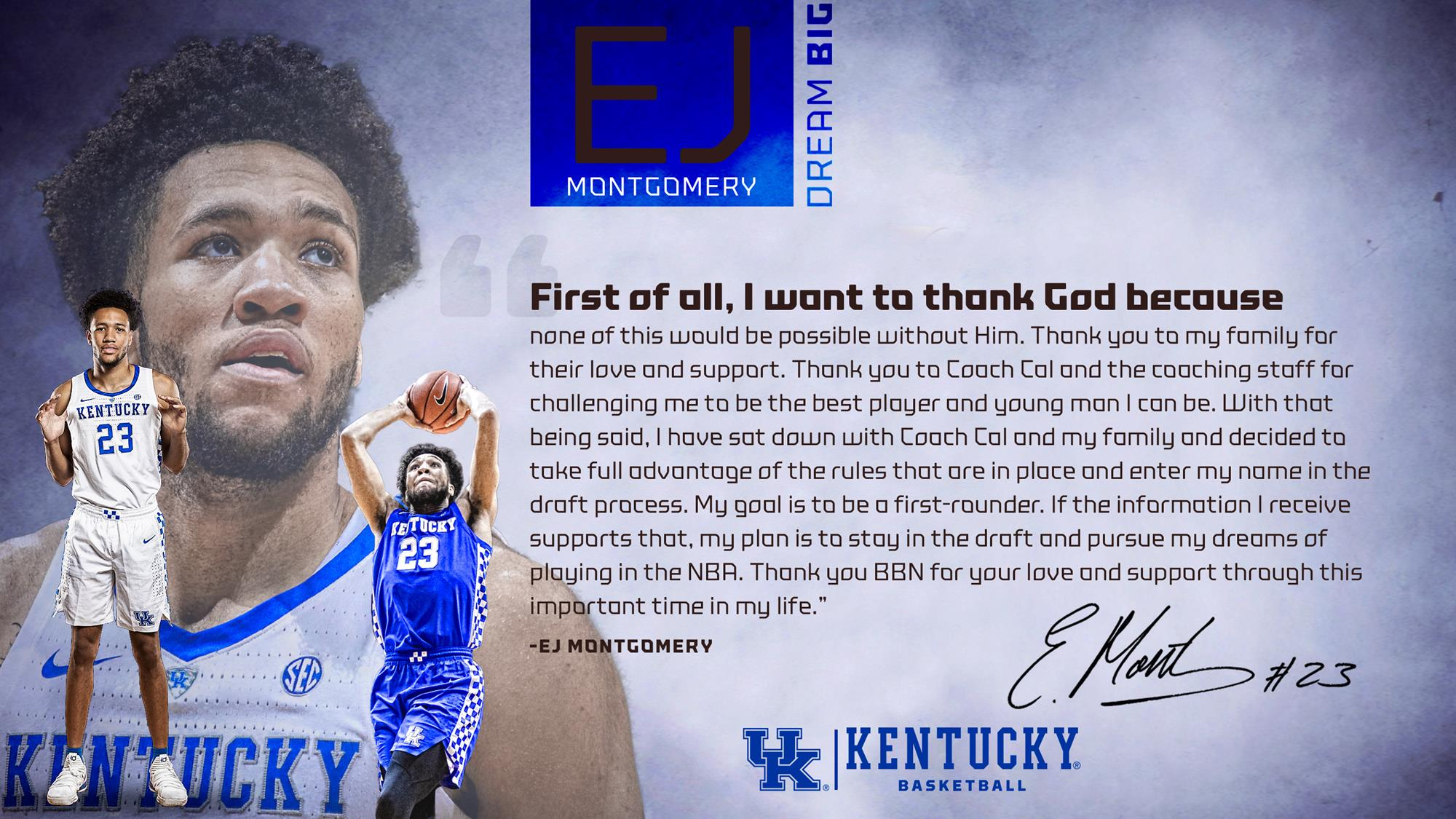 LEXINGTON, Ky. – Kentucky men’s basketball freshman forward EJ Montgomery announced Friday that he plans to submit his name for the 2019 NBA Draft. Under new NCAA rules, Montgomery can sign with an NCAA-certified agent, receive feedback and still return to school.

Montgomery will have until May 29 (10 days after the NBA Draft Combine) to make a final decision as to whether he wishes to remain in the draft or return to Kentucky.

“First of all, I want to thank God because none of this would be possible without Him,” Montgomery said. “Thank you to my family for their love and support. Thank you to Coach Cal and the coaching staff for challenging me to be the best player and young man I can be.

“With that being said, I have sat down with Coach Cal and my family and decided to take full advantage of the rules that are in place and enter my name in the draft process. My goal is to be a first-rounder. If the information I receive supports that, my plan is to stay in the draft and pursue my dreams of playing in the NBA. Thank you BBN for your love and support through this important time in my life.”

Montgomery is the fourth underclassman from the 2018-19 Wildcats to declare for the 2019 NBA Draft, which will be held June 20 at the Barclays Center in Brooklyn, New York. Sophomore forward PJ Washington and freshman guards Tyler Herro and Keldon Johnson have all announced they will remain in the draft and forgo their collegiate eligibility.

Montgomery has not yet determined his final status. As in years past, players can submit paperwork to receive evaluations from the NBA and participate – if invited – in the NBA Draft Combine. At this time, Montgomery plans to utilize the current rules in place.

“EJ improved so much during the year,” head coach John Calipari said. “He helped us win games and made a difference in so many other games. I think it is smart for him and his family to explore what his options truly are. I have no doubt in mind that EJ has a bright future. Whether the information says EJ should stay in the draft or come back for another year to prepare for the rest of his life, I’ll support his decision.”

The 6-foot-10 forward out of Fort Pierce, Florida, appeared in all 37 games for the Wildcats during his freshman campaign, including making 10 starts. He averaged 3.8 points and 4.1 rebounds per game, while charting 38 total blocks, 16 steals and 15 assists. Montgomery ranked third on the team in blocks and led the team in that category in 14 games.

In his NCAA Tournament debut, he snagged 11 rebounds against Abilene Christian. Montgomery recorded his first career double-double with 11 points and 13 boards in a win over South Carolina. Against No. 1 Tennessee, he charted six points and four boards in just nine minutes. Two offensive rebounds in the second half helped spark a late comeback on the road at Florida, and he had 10 points and seven rebounds against Southern Illinois.

Since Calipari joined the Wildcat program for the 2009-10 season, UK has produced 35 NBA Draft picks over nine seasons, nearly twice as many as the next-closest school (Duke). Included in the 35 are 26 first-rounders, three No. 1 overall picks and 19 lottery selections.

Of the 25 players at UK in the Calipari era who have declared for the NBA Draft after their freshman seasons, 23 have been first-round draft picks. All 25 have played a game in the NBA.

The 2019 NBA Draft Combine will take place May 15-19 in Chicago, although it hasn’t been determined yet if Montgomery will participate. The 2019 NBA Draft is June 20 at the Barclays Center in Brooklyn, New York.