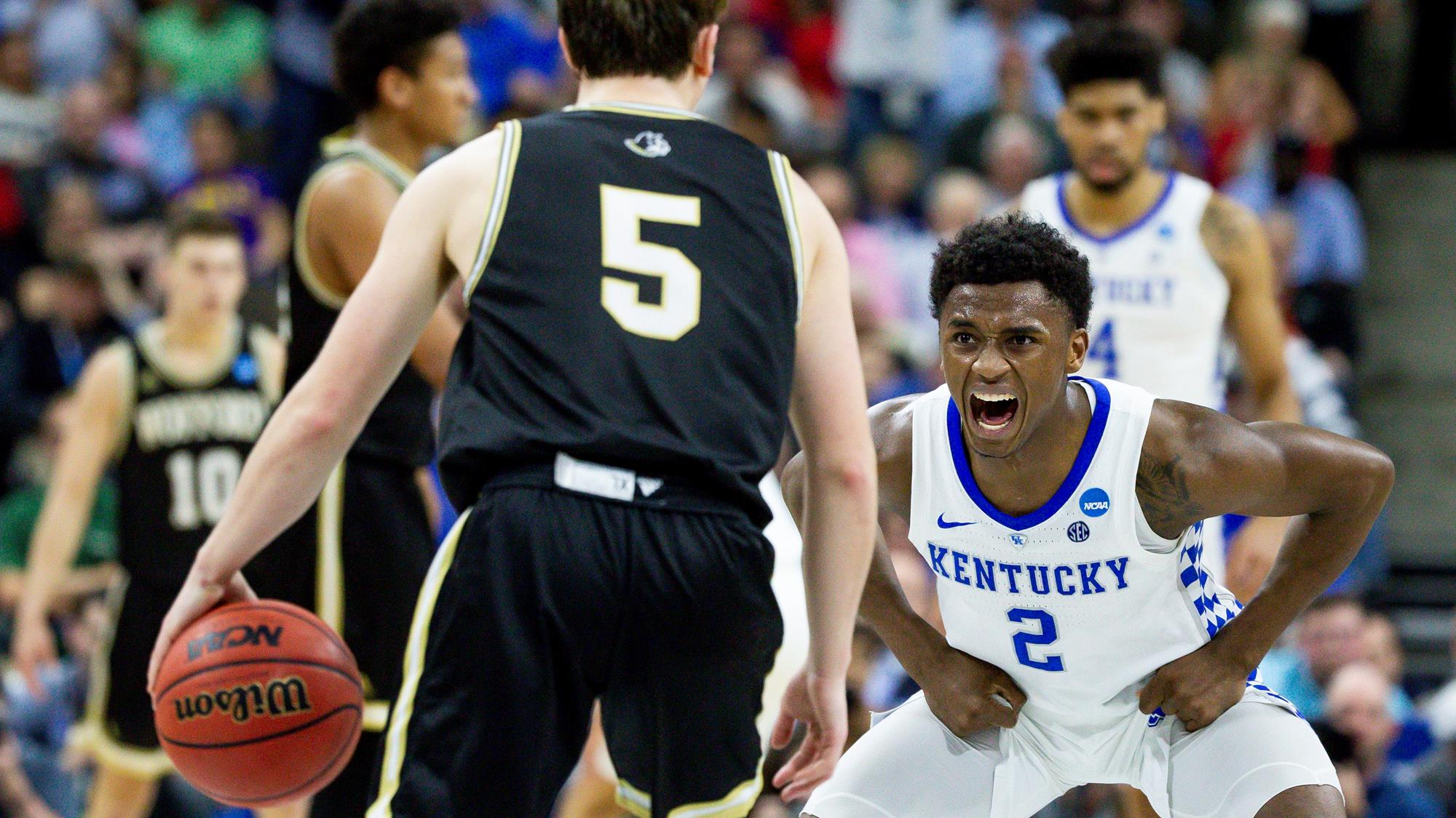 Kentucky Gets Past Wofford in NCAA Second Round

JACKSONVILLE, Fla. – Everywhere Fletcher Magee turned, there was a hand in his face, a body in his way, a relentless wave of blue that was intent on making sure he never found any alone time.

Kentucky totally and completely shut down the most prolific 3-point scorer in Division I history.

Thanks to that stifling defensive effort, the Wildcats are moving on in the NCAA Tournament.

Magee missed all 12 attempts from long range in his final college game Saturday, and Kentucky held off Wofford 62-56 in the second round of the Midwest Region.

”We wanted to make him put the ball on the floor and make a basketball play,” said freshman guard Ashton Hagans, one of the players tasked with shutting down the Wofford gunner.

Reid Travis scored 14 points, grabbed 11 rebounds and made two huge free throws with 17.8 seconds left to help seal the victory for second-seeded Kentucky (29-6). But coach John Calipari knew the key to this game was at the defensive end.

”If they hit a normal amount of 3s, they probably beat us,” the coach said, savoring his eighth trip to the Sweet 16 in a decade as the Wildcats’ coach.

Wofford (30-5) certainly had its chances, limiting the Wildcats to 40 percent shooting (21 of 52) and holding its own on the boards.

But Magee simply couldn’t make a shot, which was even more stunning since he had hit seven less than 48 hours earlier in a victory over Seton Hall, the night he eclipsed the Division I record for career 3-pointers.

After his 12th and final attempt ricocheted wildly off the rim, skipping out of bounds in front of a stunned Wofford section, Magee rubbed his head in seeming disbelief.

He insisted that his looks weren’t that much harder than what he normally gets in the Southern Conference. But something was a little off, and Kentucky’s defensive pressure appeared to wear him down by the final horn.

It was only the second time all season that Magee failed to make at least one shot from long range, following an 0-for-9 performance at Kansas in early December.

The rest of the Wofford roster went 8 of 15 from 3-point range. Nathan Hoover made four of them to finish with 19 points and Cameron Jackson chipped in with 11 points. Magee finished with 8 points on 4-of-17 shooting overall.

Kentucky’s length, athleticism and effort certainly had something to do with Magee’s dismal showing. Tyler Herro had a tough shooting game himself, but he did a yeoman’s job on the Wofford gunner. Hagans and Jemarl Baker Jr. also stepped up at times to keep an eye on Magee.

”It was the effort and energy, and my hope is they got a little worn down because these guys did not stop,” Calipari said, looking over at his players. ”They just chased, and they knew they couldn’t let up in this game or they were going to score baskets.”

Hagans added 12 points for the Wildcats, who fell behind by as many as 6 points in the first half before going on a late spurt that sent them to the locker room with a 28-26 lead. The Terriers briefly recaptured the lead early in the second half, but Kentucky went ahead for good with 14 1/2 minutes remaining and doggedly protected their advantage the rest of the way.

The Wildcats managed to win twice in Jacksonville without their leading scorer and rebounder, sophomore PJ Washington, who watched the games from the bench wearing a hard cast on his sprained left foot.

BATTLE ON THE INSIDE

Kentucky’s Nick Richards caused a stir the day before the game when he said his team’s big men were better than Wofford’s.

Actually, the Terriers weren’t overmatched at all.

Wofford: The Terriers certainly proved worthy of the No. 7 seed, the highest for a Southern Conference team since 1979, but a horrendous performance by their best player spelled the end of their 21-game winning streak. Still, they can savor the first NCAA Tournament victory in school history.

Kentucky: The Wildcats head to the regional semifinals with all eyes on Washington, who will likely have his cast removed the middle of next week and hopes to be back on the court next weekend.

Wofford: Will have to replace key seniors Magee, Jackson and Pegram, but the future looks bright for the tiny school from Spartanburg, South Carolina.

Kentucky: Faces either No. 3 seed Houston or 11th-seeded Ohio State next Friday in the regional semifinal at Kansas City, Missouri. The Cougars play the Buckeyes on Sunday.

Tickets for the regional semifinal games in Kansas City can be purchased by visiting NCAA.com/MBBTickets. Fans will find complete ticket information for all NCAA sites, including information on the NCAA Ticket Exchange (NCAA.com/Exchange), the official secondary marketplace for authentic NCAA Tournament tickets. Student ticket information is now available online at UKStudentTix.com.