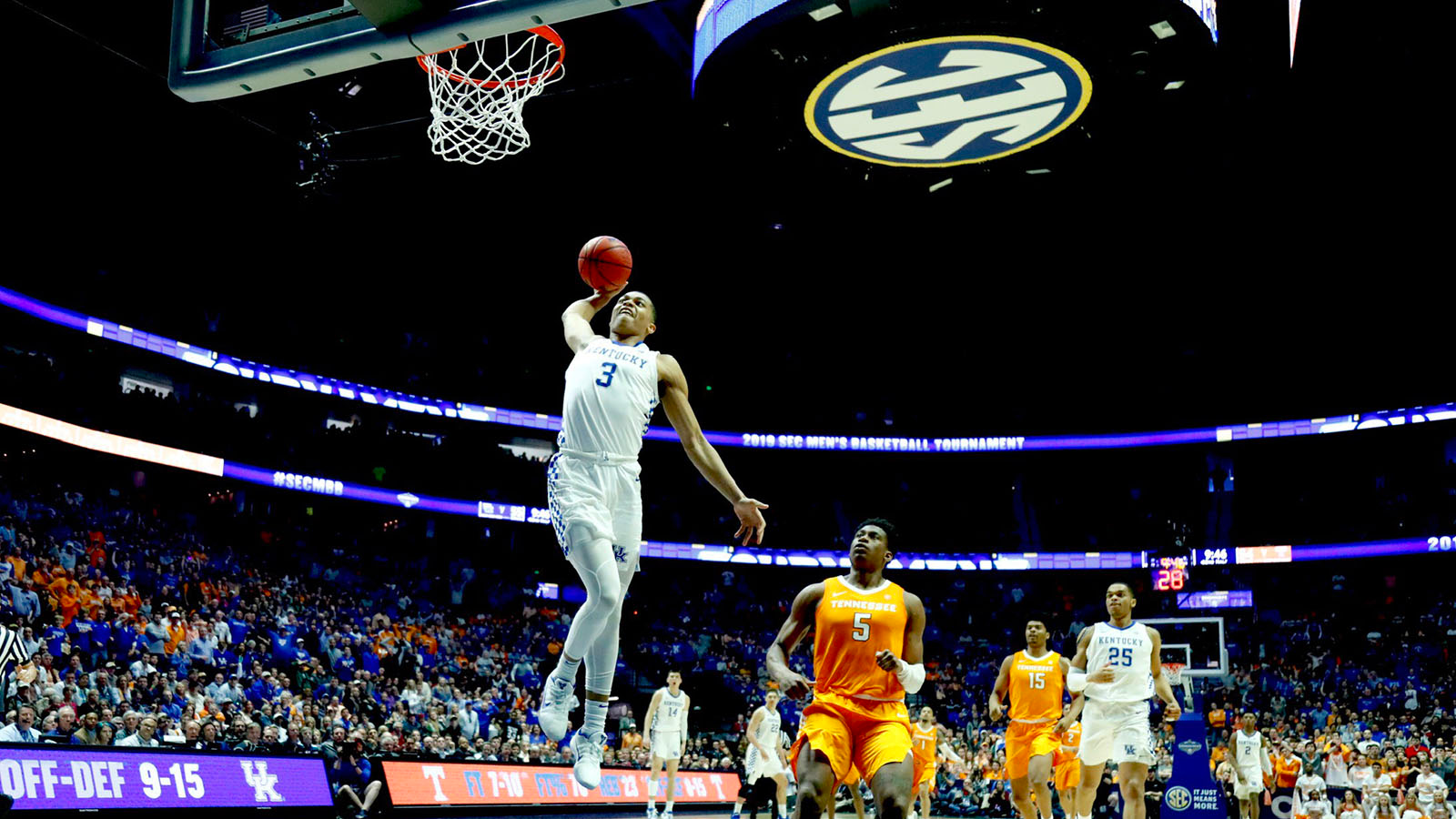 No. 4 Cats Falls to No. 8 Vols in SEC Tournament Semis

NASHVILLE, Tenn. – PJ Washington scored 16 points, including 14 in the second half, but fourth-ranked Kentucky came up just short, falling to No. 8 Tennessee 82-78 in a classic SEC Tournament semifinal at Bridgestone Arena.

“Hats off to Tennessee, hard-fought game,” said UK head coach John Calipari. “We had our chances. We had the lead late. These guys will tell you, we usually don’t give up those kind of games. Even though we’re young, we still usually finish them off.”

The game was back and forth between the teams for the entire game. Neither team held a double-digit lead in the contest. The game was tied nine times and there were 15 lead changes.

In the first half, the game was tied three times early, including at 7-7. After Tennessee got a free throw from Grant Williams, Kentucky scored six in a row, four of which were by Johnson, to grab a 13-8 lead. Tennessee scored eight of the game’s next 10 points to take a 16-15 lead with 13:04 to play in the half.

Herro scored five in a row as the Cats took a 20-16 advantage, but the Vols answered with five in a row of their own to grab a 21-20 lead.

Early in the second half, Kentucky was able to tie the game on three occasions before Tennessee scored four in a row to lead 44-40. The Cats answered with a 7-1 run, keyed by four points from EJ Montgomery, to take a 47-45 advantage with 14:50 to play.

The teams traded leads on multiple occasions before Kentucky scored six in a row to lead 63-58 with 7:34 left in the game. The Cats would stretch the lead to as many as eight, 72-64, with 2:58 to play. But that’s when Tennessee assembled the game’s most significant run. The Vols outscored Kentucky 11-2 to lead 75-74 with 1:31 to play.

But Kentucky had an answer when Washington tipped in his own miss, giving the Cats a 76-75 with 1:01 remaining.

On the Vols’ next possession, Lamonte Turner drilled a deep three with 30 seconds left to give Tennessee a 78-76 advantage. On Kentucky’s ensuing possession, Washington had two tries to tie the game, but missed and the Vols got the rebound and were fouled with 10 seconds left. Bone made both free throws to give UT an 80-76 lead. After a Hagans layup, Bone was fouled again, this time with two seconds remaining, and he made both free throws again to seal the win.

Admiral Schofield led Tennessee with 21 points, while Williams had 20. Jordan Bone had 18 points, including four clutch free throws late, for the Vols, who advance to Sunday’s championship game to face Auburn.

Kentucky will return home and await tomorrow’s NCAA Tournament selection show, where they will find out their next opponent and destination.