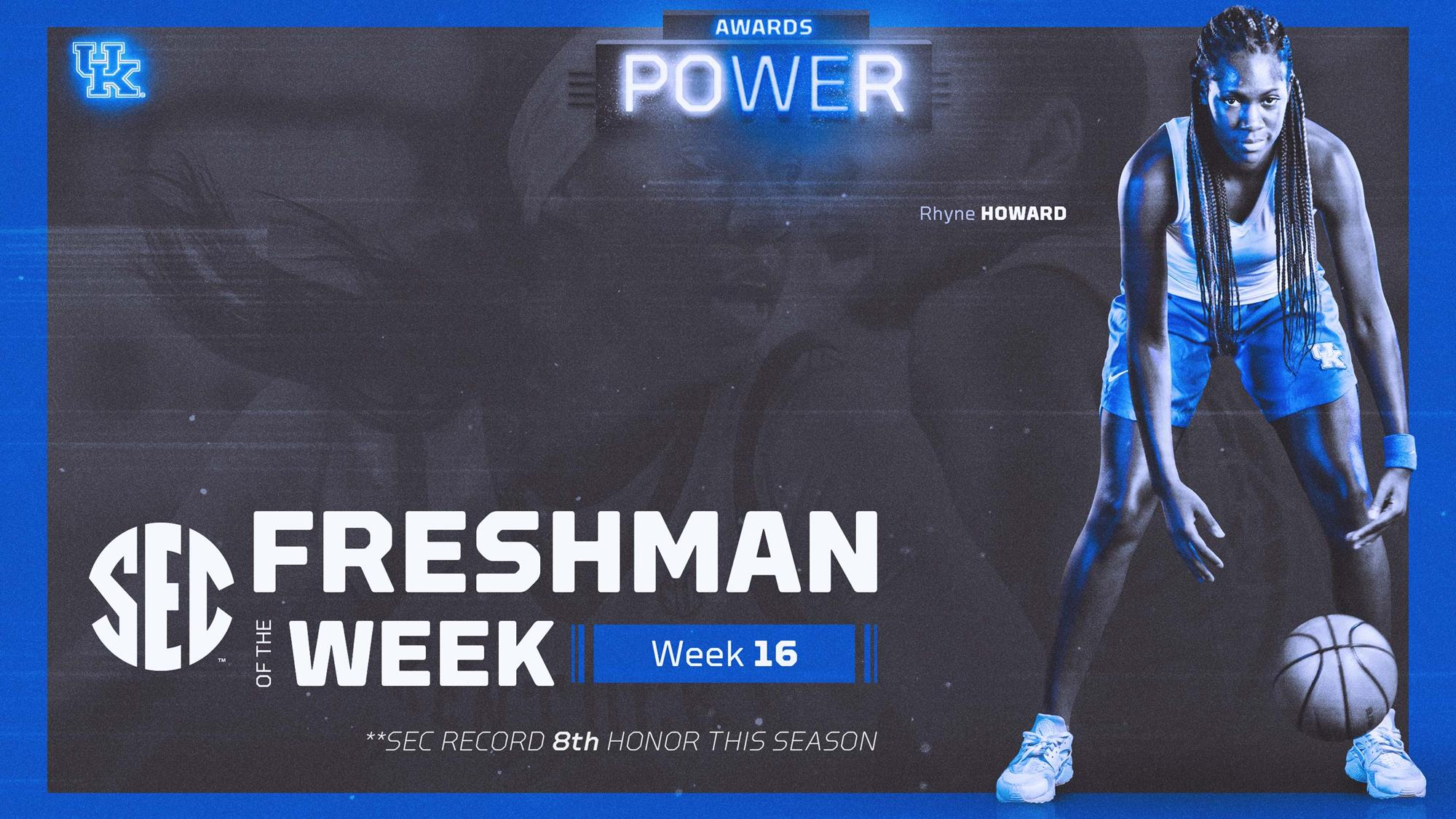 LEXINGTON, Ky. – The honors keep coming for Kentucky freshman guard Rhyne Howard, who has been named the Southeastern Conference’s Freshman of the Week for the third straight week and eighth total time this season, it was announced Tuesday by the league office.

Howard, who last week won the honor for the seventh time surpassing Missouri guard Sophie Cunningham’s league-record six honors in 2015-16, earned the honor this week after helping Kentucky extend its winning streak to six games with victories over South Carolina and LSU.

The guard started her week with 17 points, four rebounds, two assists and three steals at No. 13 South Carolina helping Kentucky earn its first win in Columbia since 2012. Howard followed with 12 points, five rebounds and two steals against LSU, helping UK secure a 10-win season in league play for the ninth time under Matthew Mitchell. At USC, Howard had a key stretch where she scored eight straight points to push UK’s lead to nine in the second quarter and then hit a big 3 against the Gamecocks with 4:34 left in the game to push UK’s lead back to 7. She helped seal the win with two clutch free throws with 1:09 left in the game. Howard hit a big 3 at the halftime buzzer against LSU to give UK a double-digit lead going into the break, which it would not relinquish.

The strong performances moved her up to third all-time in program history in scoring for a freshman while she continues to increase the school record for most 3s by a freshman to 66. Howard has 15 or more points in 21 games this season and had led UK in scoring 14 times and in rebounds 15 times.

Howard, who is on the Cheryl Miller Award Top 10 Watch List for best small forward in the nation, is the first UK freshman in the Matthew Mitchell era to score at least 10 points in each of her first 10 games and currently ranks first on the team in points per game with 16.7 and leads in rebounds per game with 6.7. She is also first in 3-pointers made with 66 and ranks second in steals with 61 and assists with 68.

The rookie guard is the only player in school history – men’s or women’s – to earn eight such honors from the league office in a single season. The guard began her dominance of the award this season by winning the title on Nov. 13 after scoring 15 points in her collegiate debut and 29 a few days later against Southern. She also claimed the award on Nov. 27, Dec. 11, Dec. 23, Jan. 8, Feb. 12 and Feb. 19.