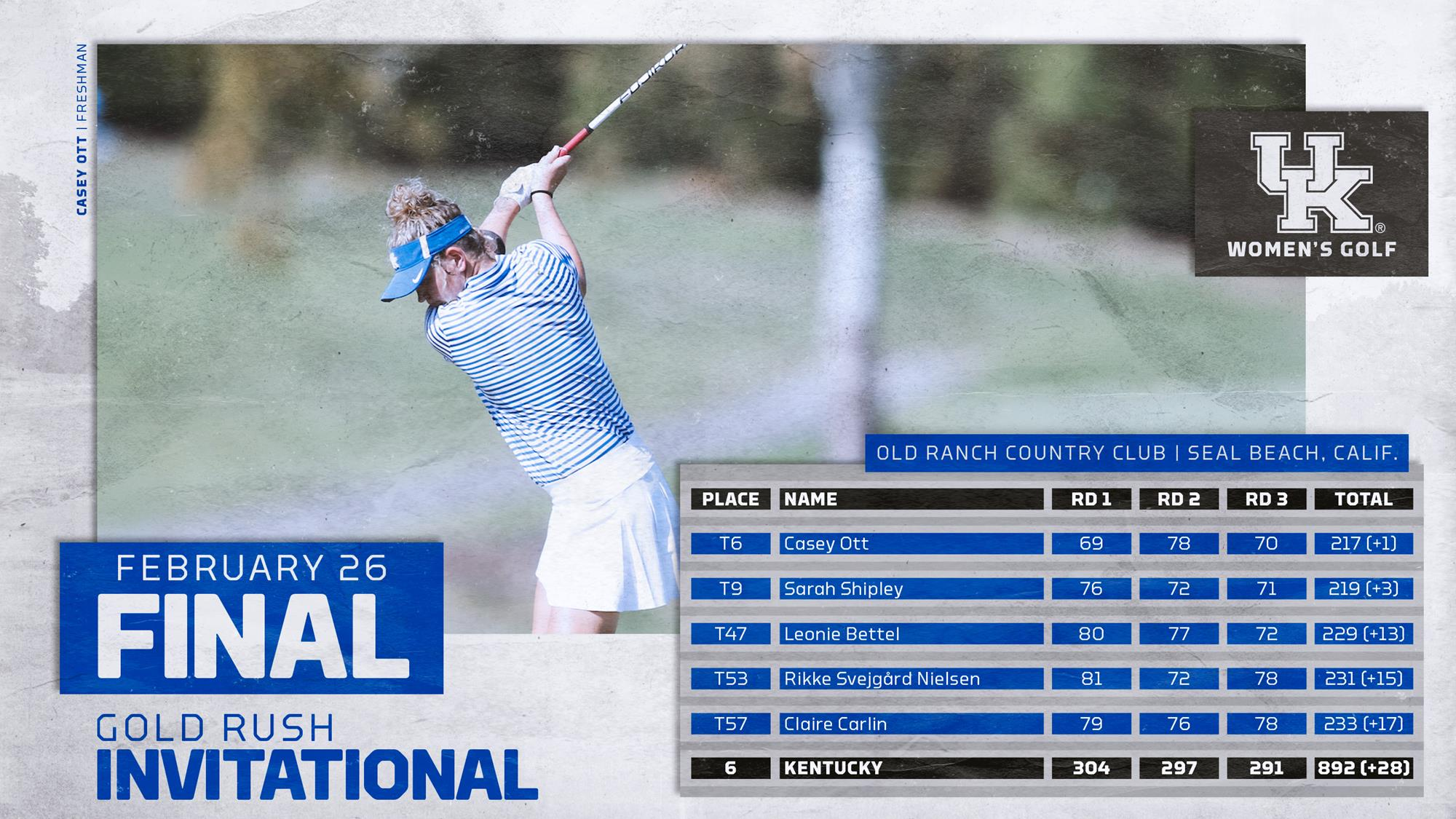 SEAL BEACH, Calif. – The Kentucky women’s golf team delivered encouraging results in the final round of the Gold Rush Invitational and restored a promising outlook for the rest of the spring season in the process.

The Wildcats put together their best round of the spring, moved into sixth place, and two Wildcats – one, a veteran who’s experienced success before, and another, a freshman who has become an instant-impact player – finished in the top 10.

With freshman Casey Ott and junior Sarah Shipley leading the way, the Wildcats fired a final-round 291, just 3-over par. It was the third-best round of the day in the 15-team field.

Kentucky jumped three positions in the final round thanks to its fourth-best round of the season and its best since a 286 in the second round of the Bettie Lou Evans Invitational back in early October.

Ott carded a 2-under-par 70 Tuesday to finish at 1-over par overall and tie for sixth place, one week after her first career top-10 finish, a seventh-place finish at the Reynolds Lake Oconee Collegiate Championship. Shipley was just two strokes behind at 3-over par after a final-round 71, her second straight round at even par or better.

“I thought we really found our groove in the last two rounds and we started to play a lot more aggressive,” UK head coach Golda Borst said. “We started to play with a lot more courage. We had prepared really well for this event. We went three weeks in a row and I think our practices have been good. It’s hard not having a whole lot of time in between, but we were ready to go. It was good to see that we were able to pull it together in the last two rounds.”

San Jose State, the top ranked team in the field at No. 36, edged out a hard-charging Georgia team by three strokes. San Jose State completed the 54-hole tournament at 9-over par. Georgia, ranked No. 38, recorded a score of 12-over par.

SJSU’s Abejail Arevalo and Natasha Andrea Oon tied for the best scores at 2-under par, just three shots ahead of Ott. 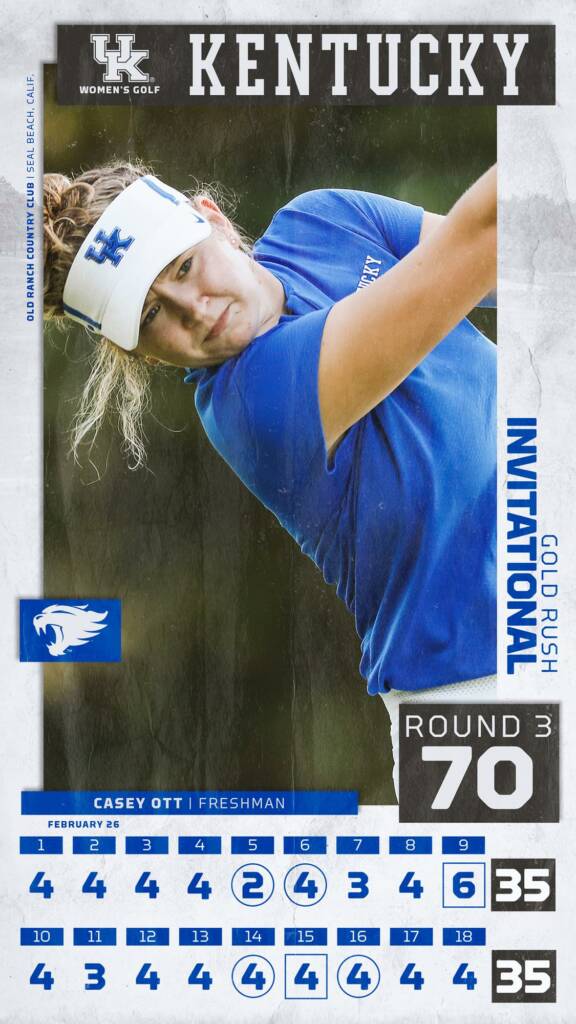 Had it not been for a 78 in the second round, Ott may have won her first collegiate medalist honors in a tournament. It was just a couple weeks ago that her sudden surge began with individual medalist honors at the Battle of the Bluegrass.

Against Louisville that week, Ott won her match vs. her Cardinal counterpart 6 & 5, and then later went out and won the individual nine-hole shootout. The next week, at the Reynolds Lake Oconee Collegiate Championship, Ott placed in the top 10 for the first time in her career with a 54-hole low of 221.

She obliterated that low by four strokes this week with two of the best rounds of her collegiate career. In Monday’s opening round, she fired a career-best 69 with eight birdies.

After falling back to the field in the afternoon round Monday, she caught fire again with a four-birdie round Tuesday, including two over her final two holes. It’s her fourth round at even par or better in her last five rounds, and she tied for the tournament lead with 13 birdies.

“Casey has come on strong this spring for a lot of different reasons,” Borst said. “We’ve challenged her just knowing that she has a lot more in her, that she had another gear. It’s been good to see her find that and find her groove and really play like she believes in herself knowing that she can go lower and putting that into action. … She’s starting to believe in what she is doing, and when you’re empowered as a player, that makes a big difference. So I’m proud of her and the fact that she responded to our challenge.”

Shipley was nearly as impressive and offered optimism for the rest of the spring. The junior from Hastings, Michigan, posted Kentucky’s best stroke average in the spring last season but hadn’t been able to regain that touch from a season ago.

After starting the tournament with a 76, Shipley fired a 72 in round two and a 71 on Tuesday. That got her to 3-over par overall and in a tie for ninth place.

Her 219 was one off her career best, set earlier this season at the Bettie Lou, and her top-10 finish was the third of her career but first of the 2018-19 season.

“We need Sarah and we need her confidence,” Borst said. “Obviously she was off to a pretty good start in the fall and then faltered off a little bit. I think when she pushes too hard the scores aren’t quite there. She’s starting to get back to the steady Sarah that she knows she needs to be. She’s a good ball striker. As long as the ball is going in a consistent direction for her she can find greens, and she’s one of our better putters. … It’s really good to see her put three solid rounds together.”

Speaking of regaining confidence, senior Leonie Bettel appeared to get her stroke back Tuesday after an uncharacteristically off day Monday. The ANNIKA Award candidate was well off the pace following the first 36 holes at 13-over par, but she salvaged the week with a final-round 72.

Although her season’s perfect streak of finishing in the top 20 of every stroke-play tournament came to an end at the Gold Rush Invitational by tying for 47th, she still managed to card her team-leading 10th round of par or better. She finished at 13-over par overall.

Sophomore Rikke Svejgård Nielsen was making a similar charge Tuesday after an eagle on the par-5 16th hole, but she couldn’t sustain the momentum when she made the turn to the front nine and ended up with a 78 in the final round. That put her at 15-over par for the tournament, tied for 53rd.

Senior Claire Carlin tied for 57th with rounds of 79-76-78 (17-over par). She contributed to the team score in two of the three rounds.

After playing in three events in 17 days to begin the spring season, the Wildcats will get a bit of a break before their next tournament. Kentucky will head back west March 15-17 for the Clover Cup in Mesa, Arizona. It’s one of just three tournaments left before postseason play begins in mid-April at the Southeastern Conference Championship.