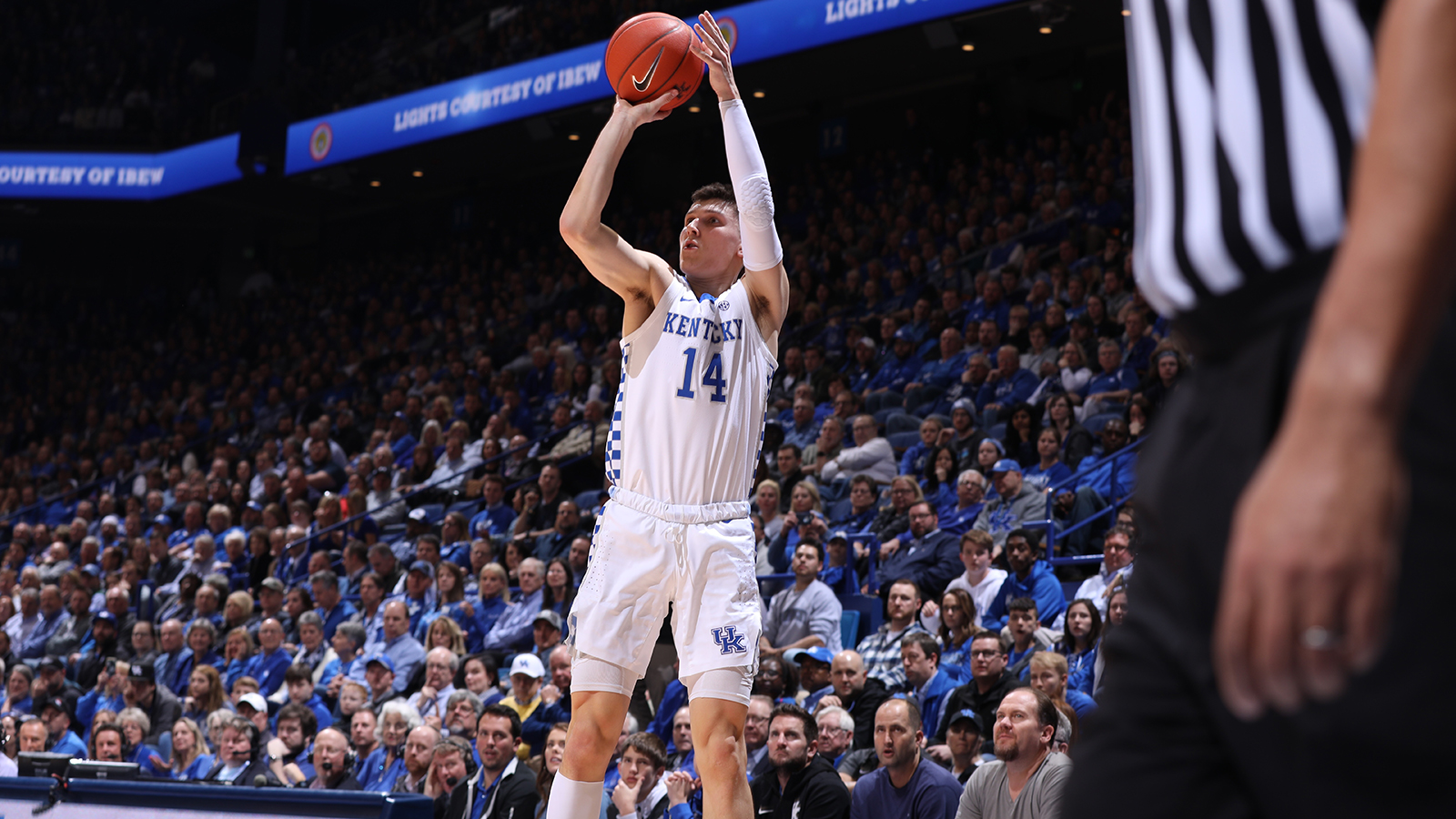 LEXINGTON, Ky. – Tyler Herro couldn’t miss in the second half, and he didn’t have much margin for error as he helped bail out No. 4 Kentucky against Arkansas.

Herro had career highs of five 3-pointers and 29 points, including two free throws with five seconds remaining, and Kentucky rallied from a 15-point deficit to beat Arkansas 70-66 on Tuesday night.

Herro made all five attempts after halftime and all six shots from the foul line to top his previous high of 24 points against rival Louisville in December.

Arkansas (14-14, 5-10) stayed within a couple of possessions over the final seven minutes but couldn’t break through. Kentucky got clutch free throws in the last 26 seconds from PJ Washington, Herro and Hagans, who made two with 1.3 seconds left to seal the Wildcats’ fourth consecutive victory.

Keldon Johnson added 13 points, and Nick Richards came off the bench to grab 15 rebounds for the Wildcats, who shot 50 percent from the field. The Wildcats made 12 of 22 after the break (55 percent) and converted 15 of 20 from the foul line.

“We couldn’t really hit anything in the first half and they were hitting everything,” Johnson said. “But we just knew we had to stay together and we’d be fine.”

Isaiah Joe had five 3s for 19 points and Desi Sills 15 for the Razorbacks, who shot 31 percent in the second half and lost their sixth in a row.

“I thought we kind of panicked a bit,” Arkansas coach Mike Anderson said. “But Kentucky’s a great team and you know they’re going to make a run. … It was a fight to the end.”

Our 15-point comeback tonight was our biggest since rallying from 17 down at West Virginia on Jan. 27, 2018. pic.twitter.com/jBNk5D1SoT

Herro’s night at the line extended his run of perfect games to 11 of the last 16 and has made 52 of 53 over that stretch. He was 8 of 9 in a win against then-No. 1 Tennessee two weeks ago.

Kentucky improved from committing 12 turnovers in the first half to making just three in the second. Arkansas had six after the break after committing just one in the first 20 minutes.

Kentucky answered a wake-up call to maintain its top-five standing with a bigger challenge looming this weekend at No. 7 Tennessee.

Arkansas: The Razorbacks had the pace and momentum they wanted but couldn’t sustain either in ending the month 2-6. Everything that worked in the first half fell apart in the second as Arkansas fell to .500 on the season.

Kentucky: The late-evening start might have contributed to their sluggishness, but the Wildcats found a way out of it to win the tuneup for the showdown at Tennessee. Richards’ rebounding provided a 40-27 edge, and his inside presence was key in shutting down the Hogs. That led to chances for Herro that paid off with 17 points after the break.

“We got more aggressive, we got our intensity, our fight jumped up,” coach John Calipari said. “Good rebounding and some other stuff.”

Arkansas hosts Mississippi on Saturday, seeking to avenge an 84-67 loss on Jan. 19.

Kentucky visits No. 7 Tennessee on Saturday in the rematch between conference co-leaders. The Wildcats won the previous meeting 86-69 on Feb. 16.