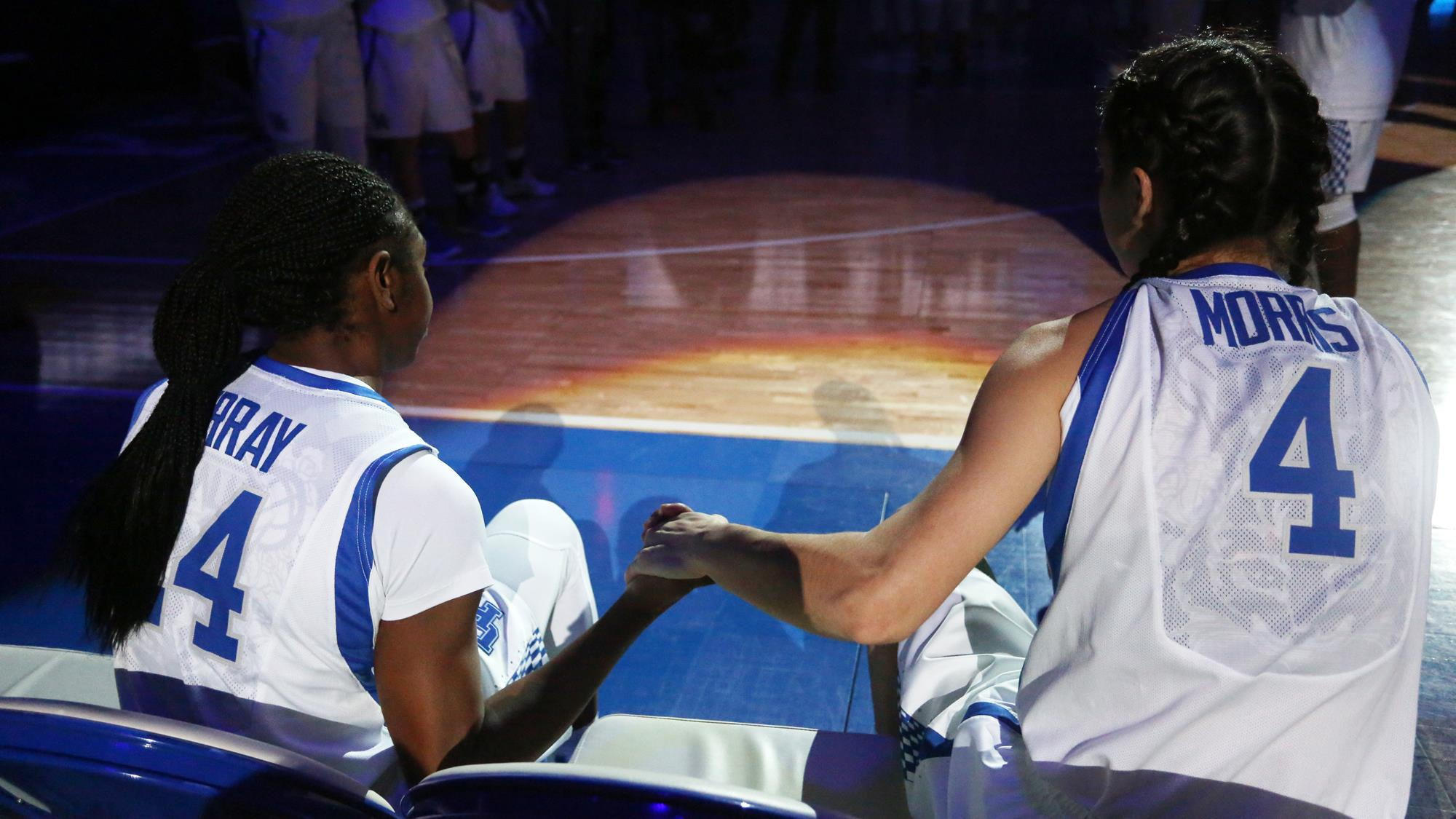 Matthew Mitchell doesn’t make a habit of reliving those times.

But when he thinks about the four players – Maci Morris, Taylor Murray, LaShae Halsel and Paige Poffenberger – UK will honor during Sunday’s Senior Day festivities, he can’t help it.

“When you think about how this group came together, they did not all come together in the usual way where you are a signing class and show up the first day and then progress through your career,” Mitchell said. “It has been an unordinary fashion and has been well documented the difficulties that we had at the end of 2016.”

Those difficulties – a rash of transfers and coaching staff turnover – led to the most trying moments of Mitchell’s career. They also could have led to the departures of Morris and Murray, but the thought never so much as crossed their minds.

“When I signed that paper (NLI) my choice was always if I was going to go somewhere I was not going to leave,” said Murray, who had 17 points, eight rebounds and five assists to lead UK to a 65-57 win at No. 13 South Carolina Thursday night.

“Me and Tay talked about it and we said we were not going to leave each other,” Morris said. “She said if she stayed that I was going to stay and vice versa so we stuck it out and performed the best we could for each other. Going off what Tay said, when I came to Kentucky I wanted to be a Wildcat and nothing was going to change my mind about that.”

Morris and Murray were just a pair of 19-year-olds at the time. Coming off standout freshman seasons, it would been easy for either or both to look to greener pastures. They chose the Bluegrass instead.

“I am really grateful for those two, very, very grateful because that was certainly the most difficult time in my professional career and dark time for me personally and a confusing time and a down and low time for me professional and for our program,” Mitchell said. “They were two real steadying influences.”

As steady as Morris and Murray were at that time, they needed company. That’s how their classmates Halsel and Poffenberger came to join them.

“We had walk-on tryouts and out of difficult times if you pay attention you will see some real miracles and incredible blessings that come your way that would not have come your way without the difficulties and hard times,” Mitchell said. “Two of those miracles have been our relationships with LaShae Halsel and Paige Poffenberger. This program is better because those two people joined our program and they have contributed in significant ways and have had tremendous careers for us. The stat sheets and the minutes played will never be able to accurately reflect the impact they have made on the program.”

The stat sheets are another story for Morris and Murray, two guards who, by any measure, now stack up among the best in Kentucky history. They are both 1,000-point scorers for their career, with Morris now cracking the top-10 all-time scoring list and Murray among the top 10 players in program history in both steals and assists.

In spite of the talent and production of the two, their junior seasons were a struggle. UK saw its eight-year streak of second-round NCAA Tournament appearances and final rankings snapped with a 15-17 season in 2017-18. As painful as that might have been, it wasn’t without an important silver lining.

“Through all the difficulty and the struggles the eight-game losing streak and the record that wasn’t what we wanted but when you look back at it everybody really grew last year,” Mitchell said. “As hard as it was, it ended up being a very beneficial year for us because I think it strengthened Maci and Taylor to a point where they understand what they need to do and how far they have to come out of their comfort zone to be effective leaders.”

With them leading the way, the Wildcats entered the polls after an impressive week at the Paradise Jam and haven’t looked back. Sitting at 22-5 (9-4 SEC) on the season, No. 16 UK has already surpassed its win total from last year by seven victories and is in position to earn a first-round SEC Tournament bye.

“Those two have really grown in their leadership,” Mitchell said. “Now, you go into this season and have no idea how this would unfold but we knew we had a group of high-character people that would work hard to form a team and see it unfold the way it has up to this point and to have the opportunity to put ourselves in a position to have a special season is really gratifying as a coach because as I just said I know how much they have been through and what they have sacrificed.”

The sacrifice is now well worth it for them both.

“I think going through the hard times makes you appreciate the good times a lot more,” Morris said. “We went through a lot of things with people transferring and having a losing season, it makes this year a lot more enjoyable and memorable for us.”

“We are just trying to enjoy it as much as possible,” Morris said. “We don’t have that much time left but there are a lot of games left and we are going to work hard and compete as much as we can because we want a championship whether that be SEC or making it to the Final Four. Our goal has been the same since our freshman year and we are not taking our eyes off of that.”