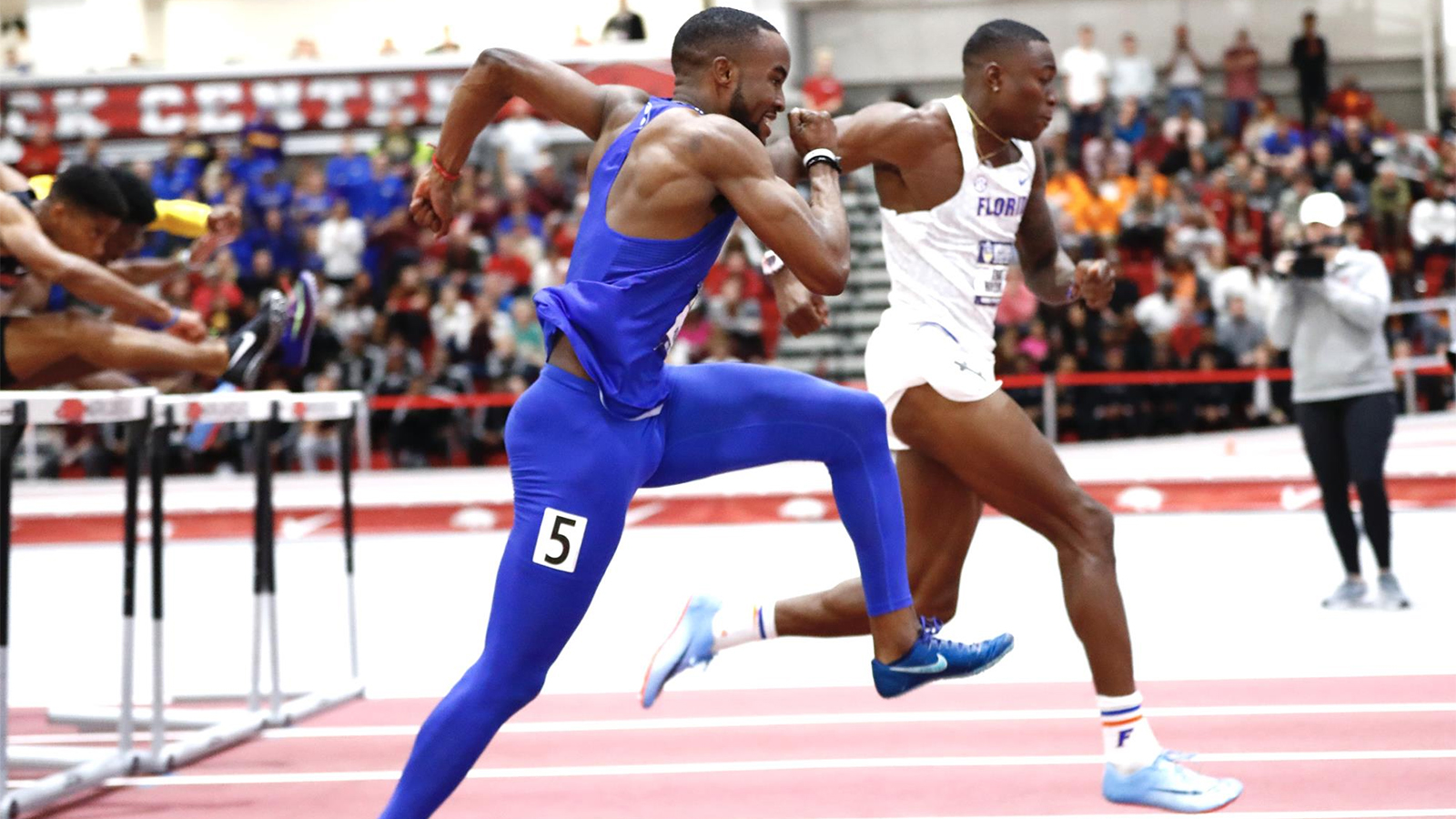 The UK women’s team finished sixth in the team standings with 51 points.

The Wildcats picked up five individual medals for the meet – four women’s (three silvers – the two on Saturday plus Micaela Hazlewood’s shot put on Friday – and a bronze) and one men’s.

The No. 3-ranked Florida men’s team and the No. 1-ranked Arkansas women’s team claimed the team titles.

Saturday medalists
Men
Daniel Roberts took SEC 60m hurdles silver in 7.48, a time that made him the fourth fastest collegian ever in the event (sixth fastest time).

Women (Saturday medalists)
Kianna Gray picked up the first SEC medal of her career with an inspired 60m run for silver out of lane one (7.27).

Marie-Josée Ebwea-Bile Excel took silver in the women’s triple jump with her best mark of the calendar year: 44’8.75″/13.63m.

Saturday scorers
Men
Ben Young and Brennan Fields combined to put up seven points for Kentucky in the men’s mile, which started the Saturday action on the track. Young finished fifth in 4:04.95 to score four and Fields placed sixth in 4:06.18 to tally three more.

Faith Ross and Masai Russell scored a combined six points in the women’s 60m hurdles with Ross running 8.28 to place fifth and score four and Russell finishing in 8.32 for seventh to score two.

Carly Hinkle added a point to the six Ellen Ekholm scored in the high jump, finishing in a six-way tie for sixth after clearing 5’7.75″/1.72m.

The UK women’s 4x400m relay of Faith Ross, Chloe Abbott, Masai Russell and Abby Steiner placed sixth with a time of 3:32.43 that was their second best of the season, and ranks No. 7 on the UK indoor all-time list.

Hazlewood, who transferred to UK from Purdue in January for her final indoor season of eligibility, took second place in her last collegiate shot put competition with a personal best 54’2″/16.51m to score eight points and move to No. 2 on the Kentucky all-time indoor performers’ list. Hazlewood is entered in the weight throw on Saturday.

Nicole Fautsch scored three more points in the women’s shot put with a 52’2″/15.90m toss that was a big season best.

The UK men’s team got field points from Matt Peare – with a school record pole vault, after Noah Castle and Charles Lenford Jr. combined to start off UK’s total in the shot put.

Meet primer
The UK women’s track and field team placed third at the SEC Indoor Championships in 2017 and 2018, tying the program’s best ever finish at the meet UK scored 74 points last season, and their best point total ever at the meet was 92 points in 1989.

A total of 15 Southeastern Conference men’s and women’s track and field programs were included in the top-25 – with the UK women’s team at No. 6 — of the latest NCAA Division I Indoor Track & Field National Rating Index released last Monday.

Eight SEC women’s programs were ranked in the top-25, including four in the top-seven.

A nation-leading seven SEC programs were ranked in the men’s top-25.

Meet format
The name of the game at the Championships was scoring points by virtue of top-eight finishes. First place scores 10 points in each event, and the point correlations reduce down to one point for eight place.