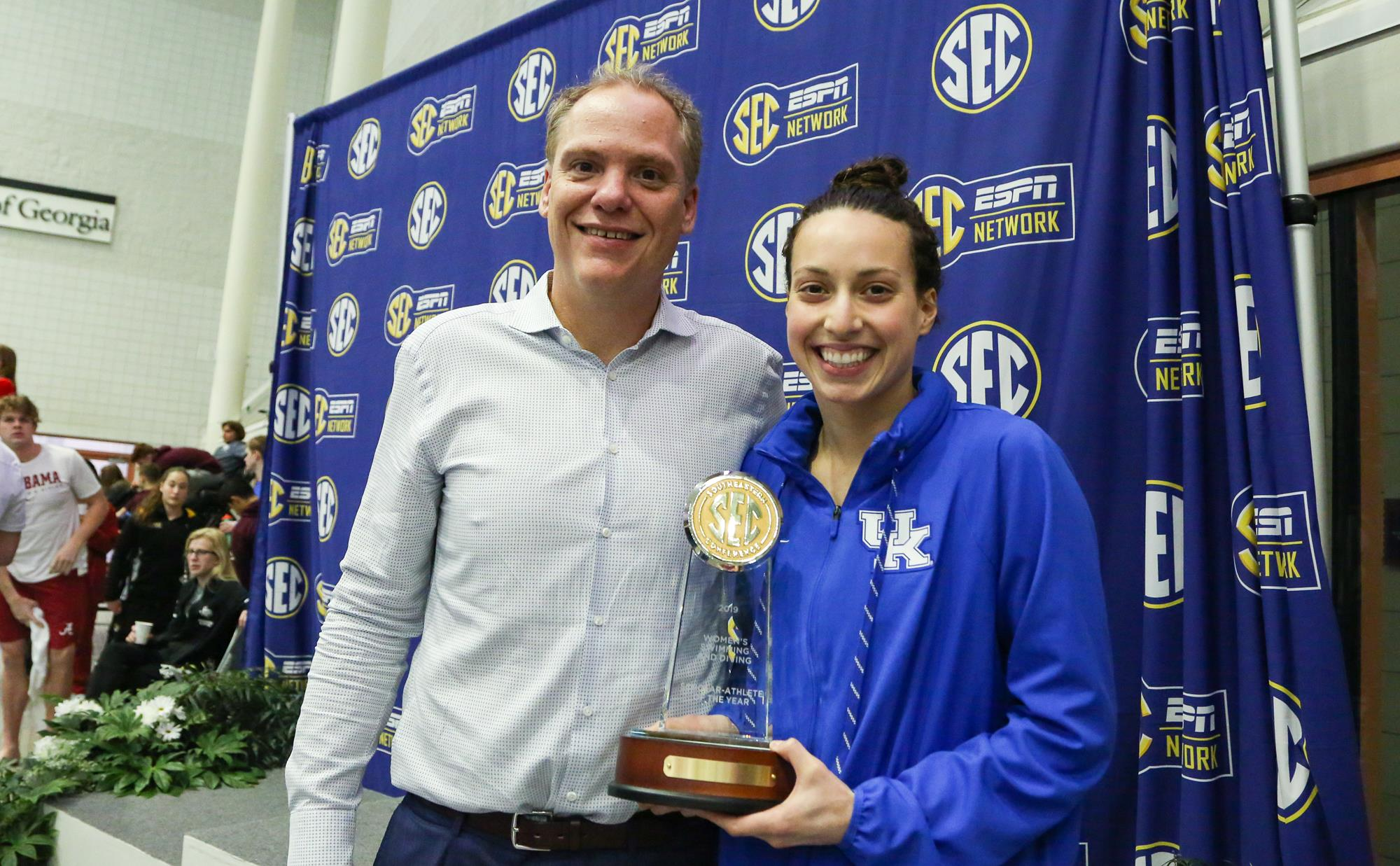 ATHENS, Ga. – Junior swimmer Asia Seidt was selected as the 2019 Women’s Swimming and Diving Scholar-Athlete of the Year by the Southeastern Conference, announced Friday. It is the third time in five years that a Kentucky swimmer has won the award.

“It is pretty impressive that a Kentucky swimmer has won this award three out of five years,” said head coach Lars Jorgensen. “This is a great honor for Asia, I’m proud of her. It’s an indication of how hard she has worked, both in the pool and in the classroom, and the type of roll model and leader she is on the team in every aspect.”

Seidt, a native of Louisville, is a Bachelor of Science in Education student majoring in kinesiology with a pre-physical therapy focus, who has a 4.0 cumulative GPA.

Seidt is also unbeaten in the 200 IM and the 200 butterfly with four wins in each discipline.

In October at the Ohio State Invitational, Seidt broke a meet record in the 200 backstroke with a 1:49.35 that earned an NCAA automatic cut. To date, she is the only Wildcat to reach the NCAA “A” standard in an individual event this season.

In only two postseason appearances in her collegiate career, the junior is a three-time SEC Champion and five-time NCAA First-Team All-American. She is the two-time defending conference champion in the 200 backstroke, which marked the first time in school history a UK swimmer won back-to-back titles in a single event. Seidt is also the defending champion in the 100 backstroke by touching the pad within 50.86 to set a school record.

The 2018 University of Kentucky Female Athlete of the Year and the 2017 SEC Female Freshman of the Year, Seidt currently holds six individual school records and has contributed to four record relays. She earned a spot at the 2019 World University World Games and the 2018-19 USA Swimming National Team, marking her second year on each team.

This week, Seidt is competing in her third conference championship in Athens, Georgia Tuesday through Saturday. On the first night, Seidt helped the 800 freestyle relay team break a school record, earn an NCAA automatic cut and a bronze medal.

Danielle Galyer, the first Kentucky swimmer to win a national championship, was the first Wildcat selected as the Scholar-Athlete of the Year, earning the title in 2015 and 2016. It also marks three such awards won by a Wildcat in Jorgensen’s six years at Kentucky.