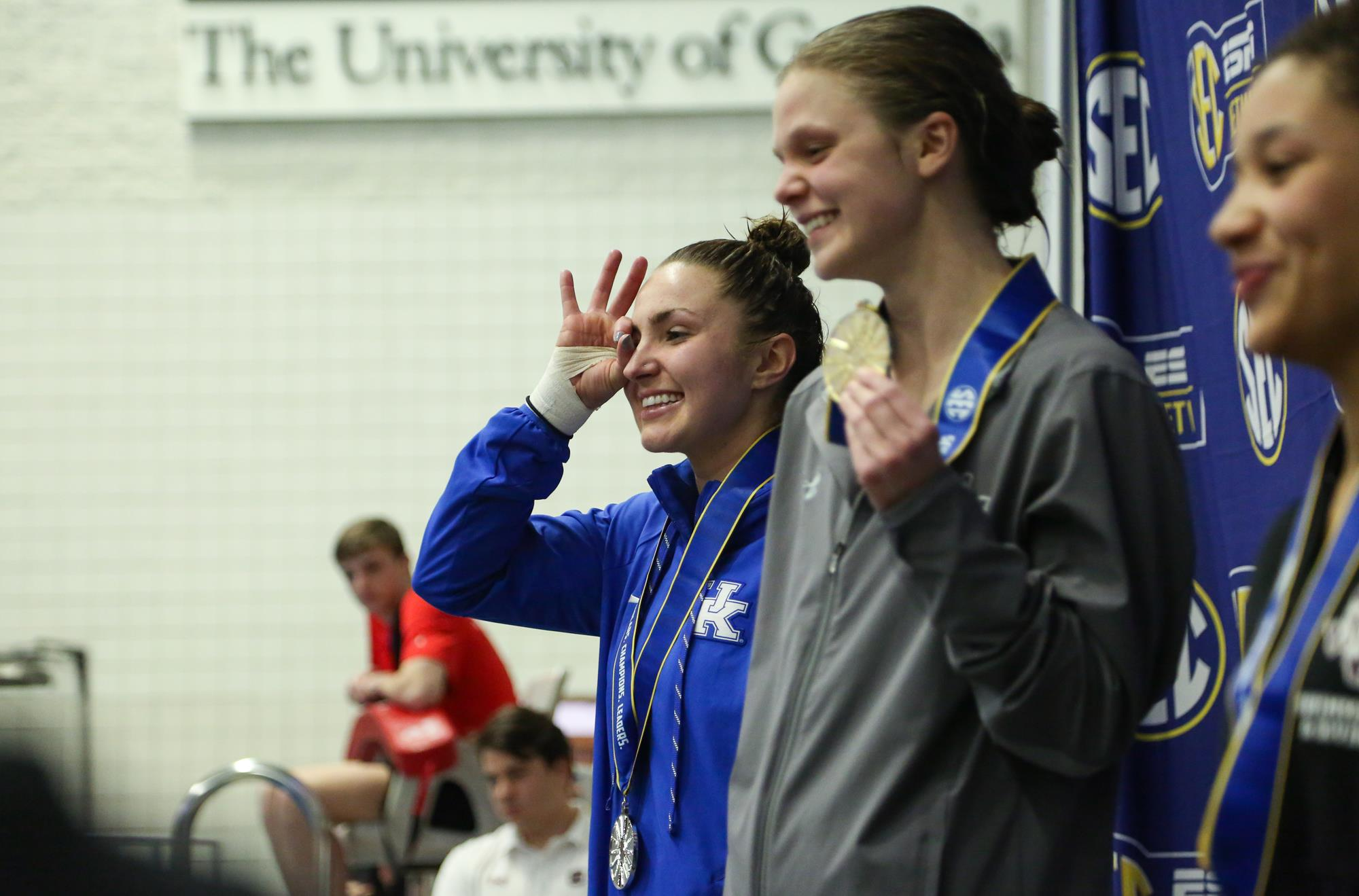 Seidt, who was selected as the 2019 Women’s Swimming and Diving Scholar-Athlete of the Year by the Southeastern Conference Friday, earned a silver medal in the 100 backstroke.

Former titleholder in the event, Seidt recorded a 51.32 in the preliminary round and a 51.16 in the final heat to earn a podium finish. The Louisville native won the event in 2018 by swimming a 50.86, which is the current school record.

The medal is her third of the week, after she helped the 800 freestyle relay team to a bronze finish on the opening night of the league meet. Seidt swam the second leg, helping UK to a new school record – 6:56.23 – which, is also an NCAA automatic cut.

Also winning a medal Friday was the women’s 400 medley relay. The troop earned a bronze medal by recording a 3:31.27, an NCAA automatic cut. Junior Ali Galyer swam the lead leg, followed by Bailey Bonnett, then Asia Seidt, while Geena Freriks sealed the deal. It is the second bronze medal the UK women have won on a relay this week.

Senior Courtney Clark also had her share of the podium. The Florida native won silver on platform with a 292.90. Clark, who is fifth on Kentucky’s top-10 all-time performance list, improved her career best by a smidge, .17. Clark’s finals score was her season best by nearly 20 points. The Wildcat recorded a 254.75 in the preliminary bout to become a finalist.

“I thought Courtney was great,” said head diving coach Ted Hautau. “She was steady, she shook off nerves in the beginning and was outstanding. She made improvements in her senior year, which are hard to make sometimes, so I’m really proud of her.”

Freshman Kyndal Knight also made the top eight to advance to finals. She finished fourth overall with a 253.80. Before that, Knight recorded a 278.00 in the preliminary round that is her career best.

The UK men also had a remarkable swim in the 400 medley relay, squashing another school record. The group of four posted a 1:09.56 to reset the school record. It marks the third school-record relay reset by the UK men this week. The charge was led by Josh Swart, then Wyatt Amdor, followed by David Dingess, and closed by Jason head.

In her conference debut, freshman Izzy Gati had a remarkable day in the 200 butterfly. Gati, a native of Arkansas, forced a 1:56.06 in the preliminary heat to set a new career low in the event and earn her first “A” final. Gati handled the pressure well when she improved her career best again by posting a 1:55.35 in finals to earn sixth overall.

Senior Haley McInerny found similar success by forcing a 1:56.05 in the preliminary round to find her first “A” final in her career. It also marked a new career best for the upperclassman. In her finals swim, McInerny finished seventh overall in the meet with a 1:56.09.

“It was a great evening for the Wildcats, especially highlighted by Asia Seidt winning SEC Scholar-Athlete of the Year,” said head coach Lars Jorgensen. “What a great achievement. The divers were great. Courtney Clark almost got a championship in her senior year. I thought both programs swam really well and were consistent today. One big day left for the Wildcats and we’re excited about tomorrow.”