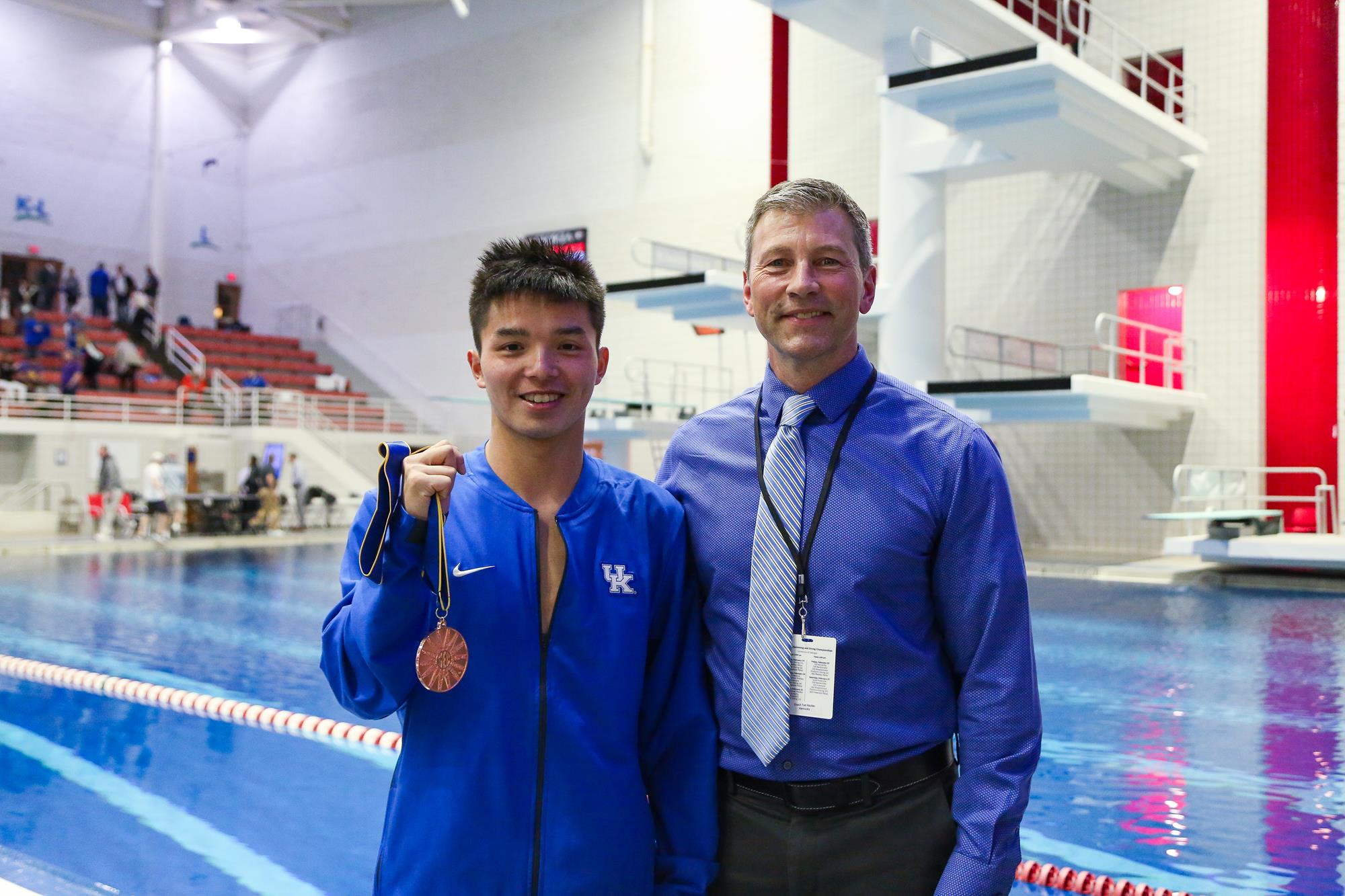 Zhang, a native of California, recorded a personal-best 439.50 to notch second on UK’s all-time performance list in the discipline, which earned a bronze medal. It is the second individual medal earned by a Wildcat this week, after senior Geena Freriks won bronze Wednesday in the 500 freestyle. It’s the third overall medal won by Kentucky in the meet, with the addition of the women’s school-record 800 freestyle relay that earned third place Tuesday.

Senior Seb Masterton joined Zhang in the finals after he posted a 394.45 in the preliminary bout. He followed that up with an even-better 408.55 to finish seventh overall and provide valuable points to the UK men’s team.

“Both of those guys were great,” said head diving coach Ted Hautau. “They were fantastic. First finals, first SECs, I mean he just performed. It was an excellent meet. Seb was tough as nails, too. It was awesome.”

Senior Paige Kelly had terrific swims in the 400 IM. In her preliminary heat, she posted a 4:13.91 to earn a spot in the “C” final. The time was her career best, but not for long. The senior felt momentum in her finals swim and answered with a new career best, charting an impressive 4:11.01. The Ohio native will put ink to the record book, becoming the fourth fastest Wildcat to swim the 400 IM.

Sophomore Lauren Edelman topped the Wildcats in the event, logging a 4:10.31 in the “B” final. It is only .09 shy of her career best, which ranks third in school history.

On the men’s side, junior Connor Blandford, sophomore Daniel Orcutt and sophomore Nick Smith received spots in the 400 IM. Orcutt and Smith rallied career-best times in the preliminary round, along with freshman Kyle Barker who earned an alternate spot – 3:48.88, 3:49.13 and 3:50.82, respectively.

Both troops had rewarding swims in the 200 freestyle. For the women, freshman Riley Gaines posted a career best 1:47.14 this morning to earn a “C” final spot, while junior Ali Galyer and Freriks made the “B” final.

Gaines dropped nearly two seconds from her preliminary swim to her finals swim, which reset her career best for the second time Thursday. She posted a 1:45.73 to win the “C” final. Freriks won the “B” final by recording a 1:44.84. She holds the school record in the event with a 1:44.26.

Three UK men set career bests in the 200 free preliminary. Junior Jason Head led the pack with a 1:35.40 to force a “B” final placement. Junior John Mitchell touched the pad within 1:35.74, and junior Peter Wetzlar saw a 1:35.87 in the event. Mitchell and Wetzlar earned spots in the “C” final.

Mitchell and Head improved their career bests for the second time Thursday with their finals swim. Mitchell grabbed the fastest swim on a 1:35.11 mark, while Head posted a 1:35.31.