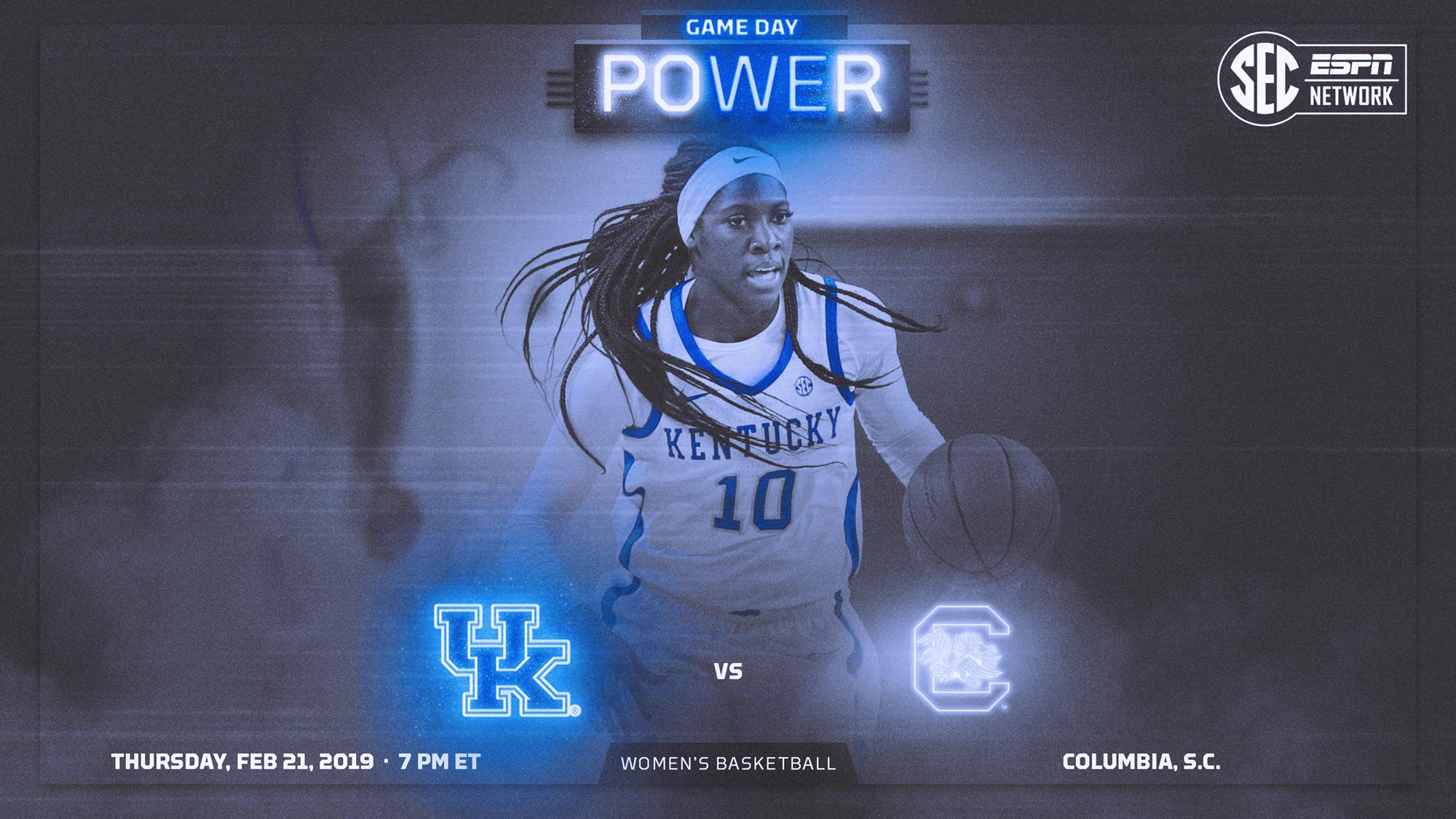 No. 16 Kentucky Travels to Face No. 13 South Carolina Thursday

LEXINGTON, Ky. – The No. 16 University of Kentucky women’s basketball team will put its four-game winning streak on the line Thursday night when it travels to face No. 13 South Carolina at 7 p.m. ET inside Colonial Life Arena.

The game will be broadcast on SEC Network with Pam Ward, Carolyn Peck and Steffi Sorensen on the call. The action can also be seen through WatchESPN on computers, smartphones or tablets. Darren Headrick will have the call on the UK Sports Network on 630 WLAP in Lexington. Live stats and free live audio will be available online at UKathletics.com.

Kentucky (21-5, 8-4 SEC) enters the week on a four-game winning streak sitting a perfect 4-0 in league play in the month of February. The streak started with a win against Florida at home before back-to-back road wins at Auburn and Alabama. UK’s fourth win came Sunday at home against Arkansas.

Rhyne Howard led Kentucky in the game scoring 18 points with 14 rebounds for her fifth double-double of the season. The rookie hit the game-winning shot with 1.3 left in the game and then had a steal on the ensuing Arkansas possession to clinch the win. The performance led Howard to be named SEC Freshman of the Week for the seventh time this season, which is a new league record.

South Carolina enters the game with a 19-6 record, including an 11-1 mark in the league sitting tied atop the conference standings. The Gamecocks are 11-2 at home this season and are undefeated at home in conference play. The lone loss in conference play for USC came at top-10 ranked Mississippi State. The Gamecocks have won seven of their last eight games with the only loss coming out of conference at top-five ranked UCONN in early February.

Kentucky leads the all-time series in games played against South Carolina 33-31 with the Gamecocks holding a 18-10 edge in games in Columbia. The Gamecocks have won nine straight games against the Wildcats, including six straight in Columbia. UK’s last win against South Carolina came March 1, 2015 in Lexington (67-56) and its last win in Columbia was Feb. 23, 2012 (53-50). The two teams met twice last season with South Carolina winning both games and the Gamecocks claimed a win earlier this season in Lexington, 74-70. Counting both games this season, the two teams will have met 10 times in the last four seasons.

Head Coach Matthew Mitchell
Opening statement…
“Well, tough game ahead tomorrow night in Columbia. It is always a tough game against South Carolina. They played a really good game against us last time and were really hard to handle here in Lexington. It is always tough to play them in Columbia. They always have a good game plan and are well coached and ready to play and always have a great crowd. So it will be a big challenge on the road for the Wildcats and we will have to prepare hard today and work hard tomorrow to get a victory.”

On what he can take from the game vs. South Carolina earlier this season …
“I felt like South Carolina really for most of the game had more energy than we had. We were really fortunate to shoot the ball well early on and get out to a lead but I thought they really took over in the middle portion of the game. A lot of it had to do with their good play, but we have to play harder. We have to play harder and with more energy and not only physically but mentally and emotionally we have to stick together and be sharper in executing what we need to do. They got us in all phases of the game. Our transition defense broke down and our box outs broke down. They really got some plays on the boards against us and then they disrupted us on offense where we weren’t able to score and took advantage there. A lot to learn from that game and I am sure the team will be motivated to correct those mistakes. That is one of the bonuses that you have when  you play an opponent twice is you get to go back and try to study and I am sure South Carolina will do the same and correct mistakes they made but it is a chance for us to pull it together and play some good basketball and win what would be a really good game.”

On playing South Carolina 10 times in the last four years …
“Very familiar opponent for sure. They are our natural rival who we play twice and everybody in the league has that opponent and South Carolina has been ours since we went to a 12-team league and did this format and now we are a 14-team league. We have played each other a lot. It is always a challenge to play them because they always have very good players and Dawn is a very good coach and very intense and their team is always ready to roll. Those are the things that you can count on and from year to year those are the constants from Dawn’s South Carolina teams. They are going to be very aggressive, very well-coaches and very prepared.”

On the team fine tuning for March …
“For us right now, what is so important is trying to be able to mentally focus and lock in. We have built our team. We know what we have to do to win. While you may throw a wrinkle in here or there, there are not a lot of wholesale changes going on right now. We are what we are and we have to be as close to our best version as we possibly can and that takes a lot of mental and emotional effort. Making sure you wake up everybody with a fresh attitude and know that we are in a very meaningful part of the season and it’s so important to stay focused every practice. This would be a huge victory if we could find a way to earn it tomorrow night. These are really important games and you cannot start looking at March yet. The practices are dwindling now. We don’t have a ton of practices let so each one is extremely valuable and very precious and I think that is really the focus of our team right now. Can we prepare extremely well to go in there and get a win tomorrow night?”

On guarding South Carolina’s in the post …
“Yeah, it has to be a team effort. They are so strong inside and so strong in the post and we just have to play great team defense. We have to be sharp on the game plan and sharp on our technique. I thought Alexis Jennings really just played a great game against us and we were a step behind. We were not ready. She is so good in the post with her footwork and her technique that you really have to be ready down in the low post. Then Herbert-Herrigan is so explosive and so long and agile and athletic that she can really beat you in and outside the paint. Just our technique has to be really solid and we have to play together. We cannot get into many one-on-one battles, we have to be a team and give a great team effort on defense. Their inside game is certainly concerning.”

On the team’s rebounding …
“We have come a long way. We started the conference just not rebounding at an SEC championship level for a team that is aspiring to be in the upper echelon of the SEC and that is clearly what we are trying to do down the stretch. You just haven’t seen any good SEC teams not be able to rebound the ball. To the players credit, they have worked really hard and spent a lot of time in practice. The coaches have done a good job of staying with the players and making sure that they are focused in practice and the assistant coaches have been vocal if we miss a box out or don’t go to the boards and helping us stay accountable. Rebounding is very, very big and it will be big in this game because South Carolina is extremely talented at rebounding the ball.”

Kentucky Falls at No. 1 South Carolina on Thursday 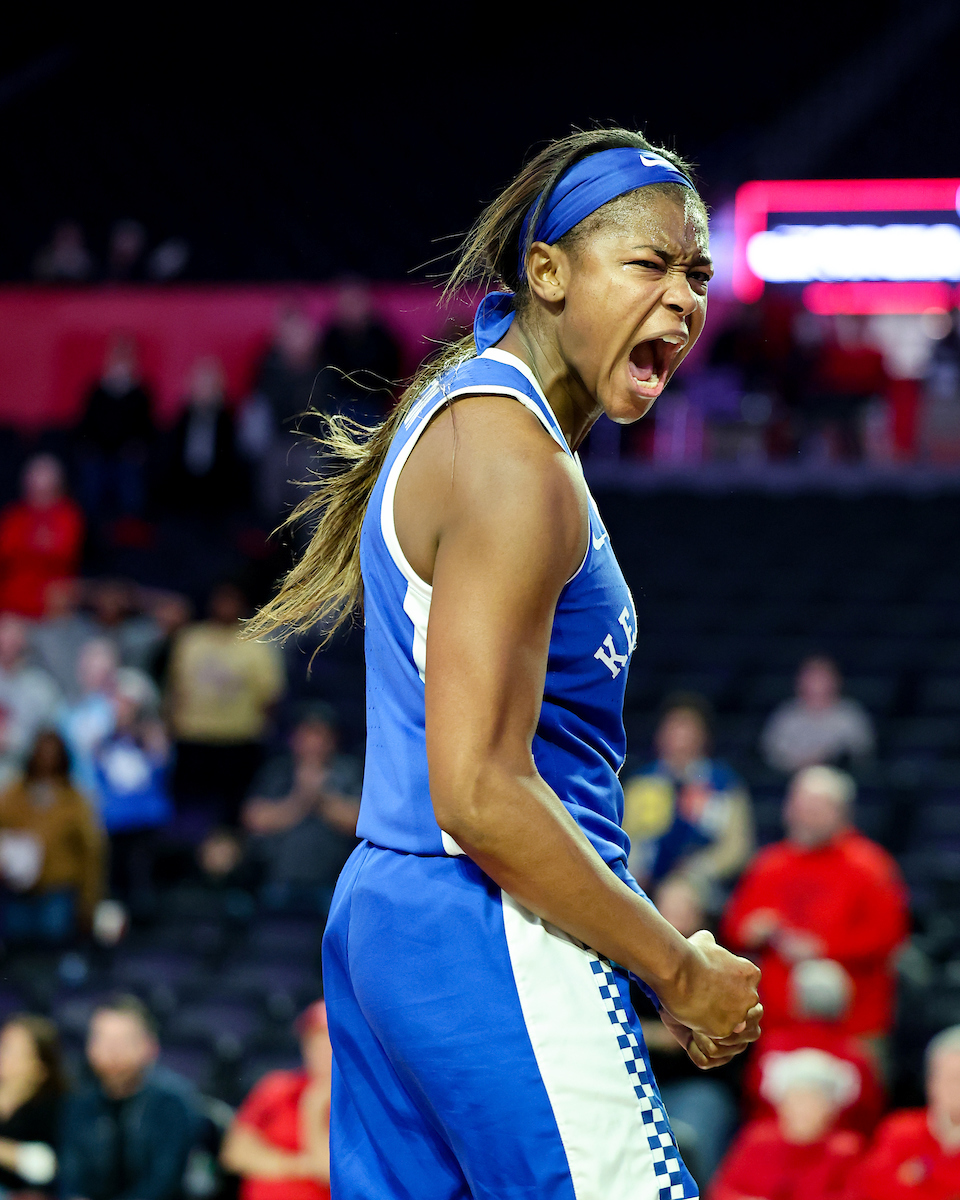