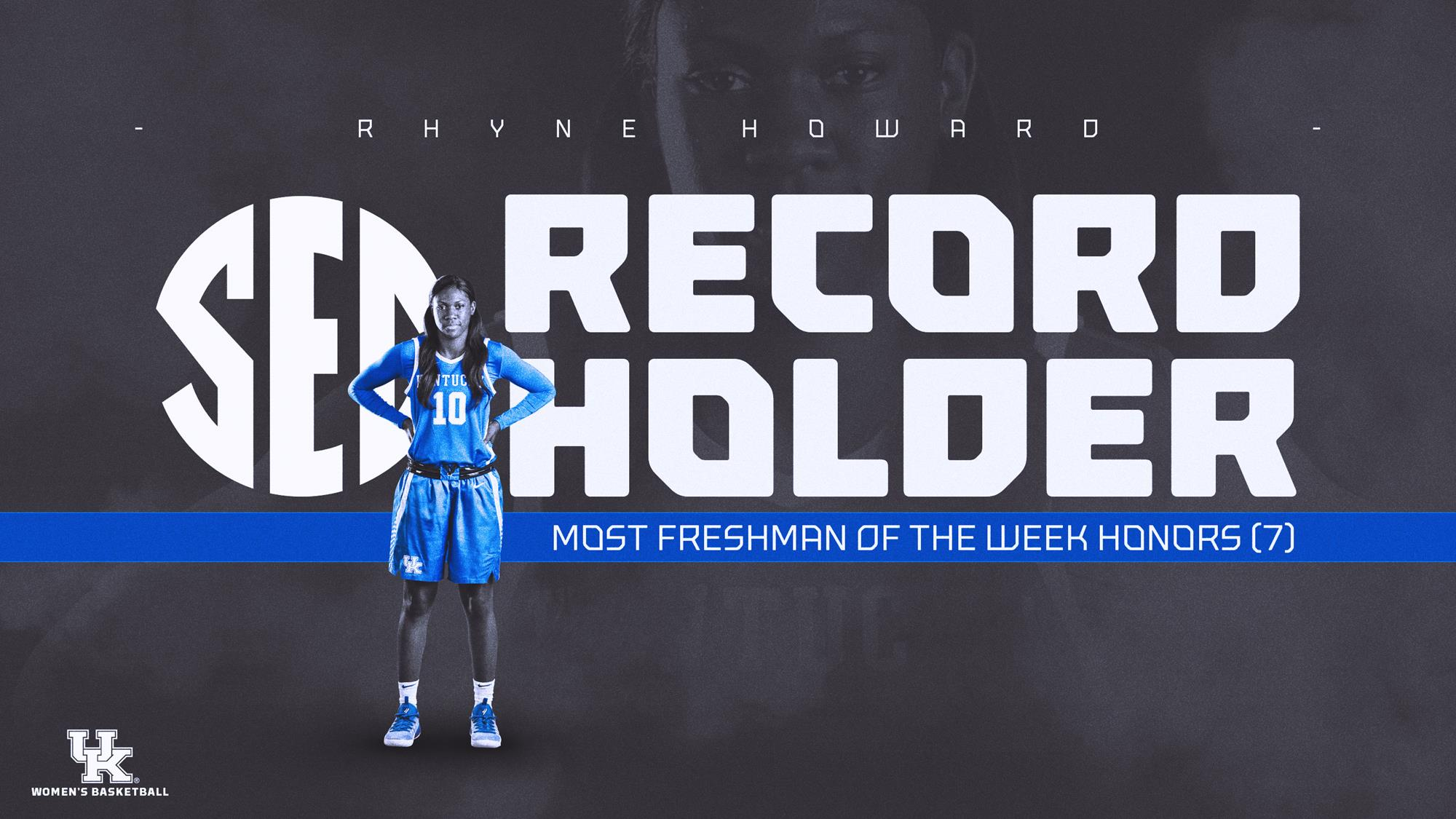 LEXINGTON, Ky. – Records were made to be broken and University of Kentucky freshman guard Rhyne Howard is here to break them. The native of Cleveland, Tenn., has been named the Southeastern Conference Freshman of the Week for the seventh time this season, setting a new league record for most FOW honors in a single season.

Howard’s seventh honor surpasses Missouri guard Sophie Cunningham’s six honors back in 2015-16. The rookie guard is the only player in school history – men’s or women’s – to earn seven such honors from the league office in a single season.

The guard began her dominance of the award this season by winning the title on Nov. 13 after scoring 15 points in her collegiate debut and 29 a few days later against Southern. She also claimed the award on Nov. 27, Dec. 11, Dec. 23, Jan. 8 and Feb. 12. Tuesday marks the first time this season Howard has won the award consecutive weeks.

The latest honor comes after Howard led Kentucky in points, rebounds, assists, steals and blocks in the Wildcats win over Arkansas on Sunday. Howard hit the game-winning jumper with 1.3 left in the game and then secured a game-clinching steal on Arkansas’ final possession. She became the first UK player to hit a last-second shot to win a game since Makayla Epps in 2017 vs. Mississippi State. Howard had 14 rebounds in the game helping her earn her fifth double-double of the season scoring 18 points.

The strong performance moved her up to third all-time in program history in scoring for a freshman while she continues to increase the school record for most 3s by a freshman to 63. Howard has 15 or more points in 20 games this season and had led UK in scoring 13 times and in rebounds 14 times. She has hit three or more 3s in three straight games and has three or more assists in nine of her 11 SEC games played.

Howard, who is on the Cheryl Miller Award Top 10 Watch List for best small forward in the nation, is the first UK freshman in the Matthew Mitchell era to score at least 10 points in each of her first 10 games and currently ranks first on the team in points per game with 16.8 and leads in rebounds per game with 6.9. She sits tied for first in 3-pointers made with 63 and ranks second in steals with 56.