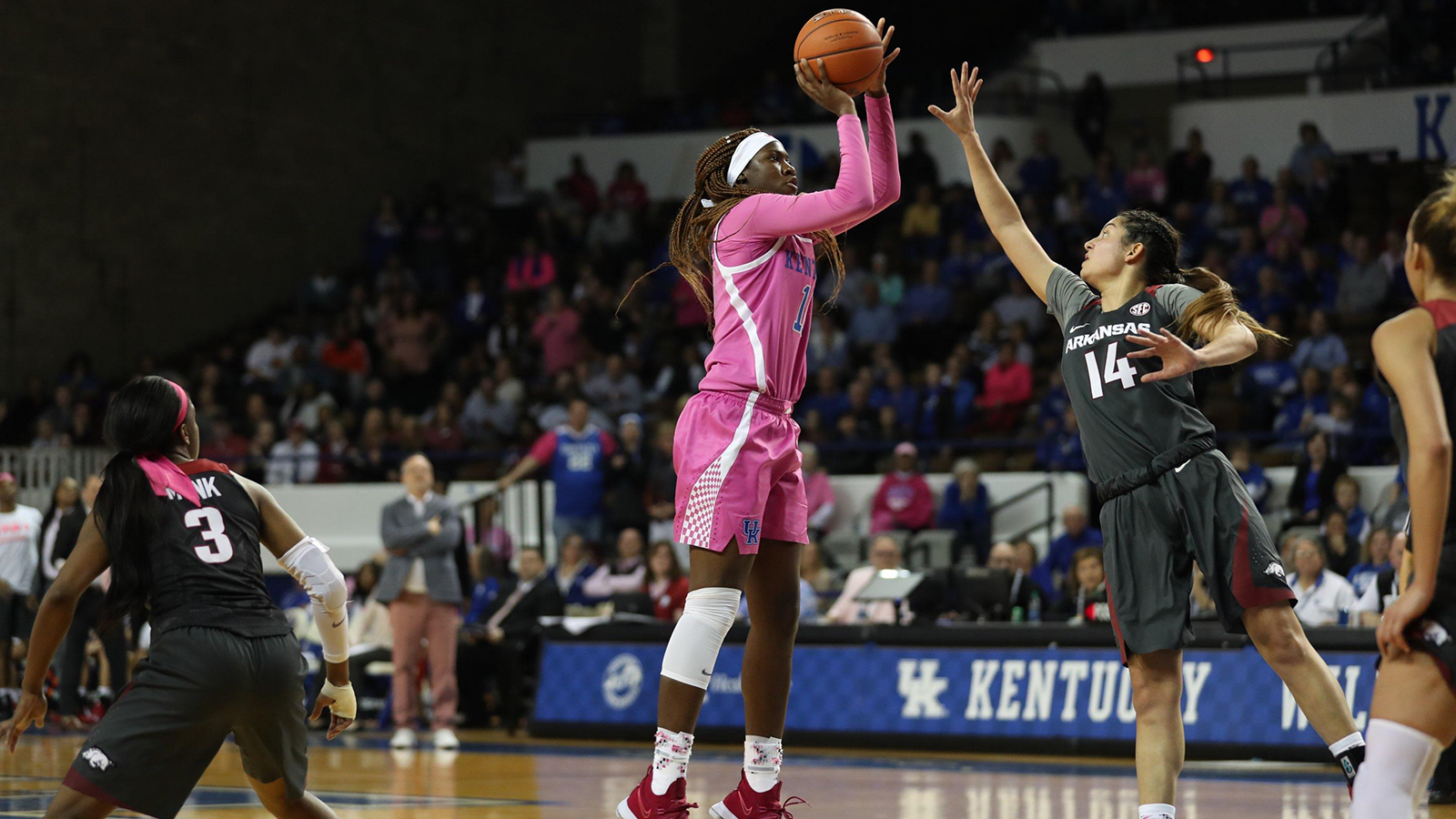 With 2:10 left, Morris knocked down a pair of free throws, giving the Cats a 57-53 edge. But Arkansas’ Chelsea Dungee scored on the other end, cutting the lead to 57-55 with 1:55 left in the game. But on the ensuing possession, Kentucky missed two shots, but got two offensive rebounds before Howard converted a putback, making it 59-55 with 1:05 to play.

Dungee then hit one of two at the line, cutting the lead to 59-56. Kentucky had chances to put the game away, but the Cats missed four straight at the line before seeing Arkansas’ Raven Northcross-Baker hit a three from the corner to tie the game at 59 apiece with 22 seconds left.

After a Kentucky timeout, Howard milked the clock before driving into the lane and hitting the jumper that would ultimately win the game. Arkansas had one final possession, but Howard intercepted an Arkansas inbounds pass to seal the victory.

Senior Maci Morris scored 11 points in the game and moved into sixth place on UK’s career scoring list. Morris now has 1,608 points during her storied career in Lexington.

Kentucky (21-5, 8-4 SEC) got on the board first via a three-pointer from Howard. Arkansas answered with a Dungee three to tie the score. Later in the quarter, the Cats would stretch the lead to 9-5 on a Taylor Murray layup. Arkansas scored four in a row to cut the lead to one, 9-8, but the Cats scored the next four points to extend the lead to 13-8. Kentucky would keep a similar advantage for the rest of the quarter until Howard hit another three with nine seconds left in the quarter, giving Kentucky a 22-14 advantage after one period.

Arkansas was able to mount a run in the second period, outscoring Kentucky 12-1 to take a 29-26 lead with 3:33 remaining in the half. The Razorbacks would lead by as many as four, 31-27, before Morris hit a three to cut the lead to one, 31-30. But a Dungee basket with 56 seconds left in the half extended the Arkansas lead to 33-30, which would be the halftime score. Howard led the Cats with nine points and Morris had eight. Dungee led all scorers with 15 in the first half.

The Razorbacks maintained that advantage early in the third period before Kentucky made its run. Trailing 41-38, the Cats scored the next five points, on a three from Howard and a fast break layup by Blair Green, to take a 43-41 advantage and force an Arkansas timeout with 3:56 remaining in the quarter. The Razorbacks would tie the game at 43 apiece before Murray scored, barely beat the shot clock off an out of bounds play, to give Kentucky a 45-43 advantage. On Kentucky’s next possession, Murray grabbed an offensive rebound and scored, extending the UK lead to 47-43. But the Hogs got a three from Malica Monk at the end of the period, making it 47-46 Cats with 10 minutes to play.

In the fourth quarter, Kentucky scored the first four points, on baskets by Murray and Green, to lead 51-46. Arkansas answered by scoring the next five to tie the game at 51-51. Kentucky hit three free throws, one by Morris and two by Murray, to lead 54-51 with 3:46 left in the game. After an Arkansas basket, Jaida Roper made one of two at the line, giving the Cats a 55-53 lead with 2:51 to play.

Kentucky returns to action on Thursday, visiting Columbia to take on South Carolina. Tipoff is set for 7 p.m. ET and the game can be seen on the SEC Network.