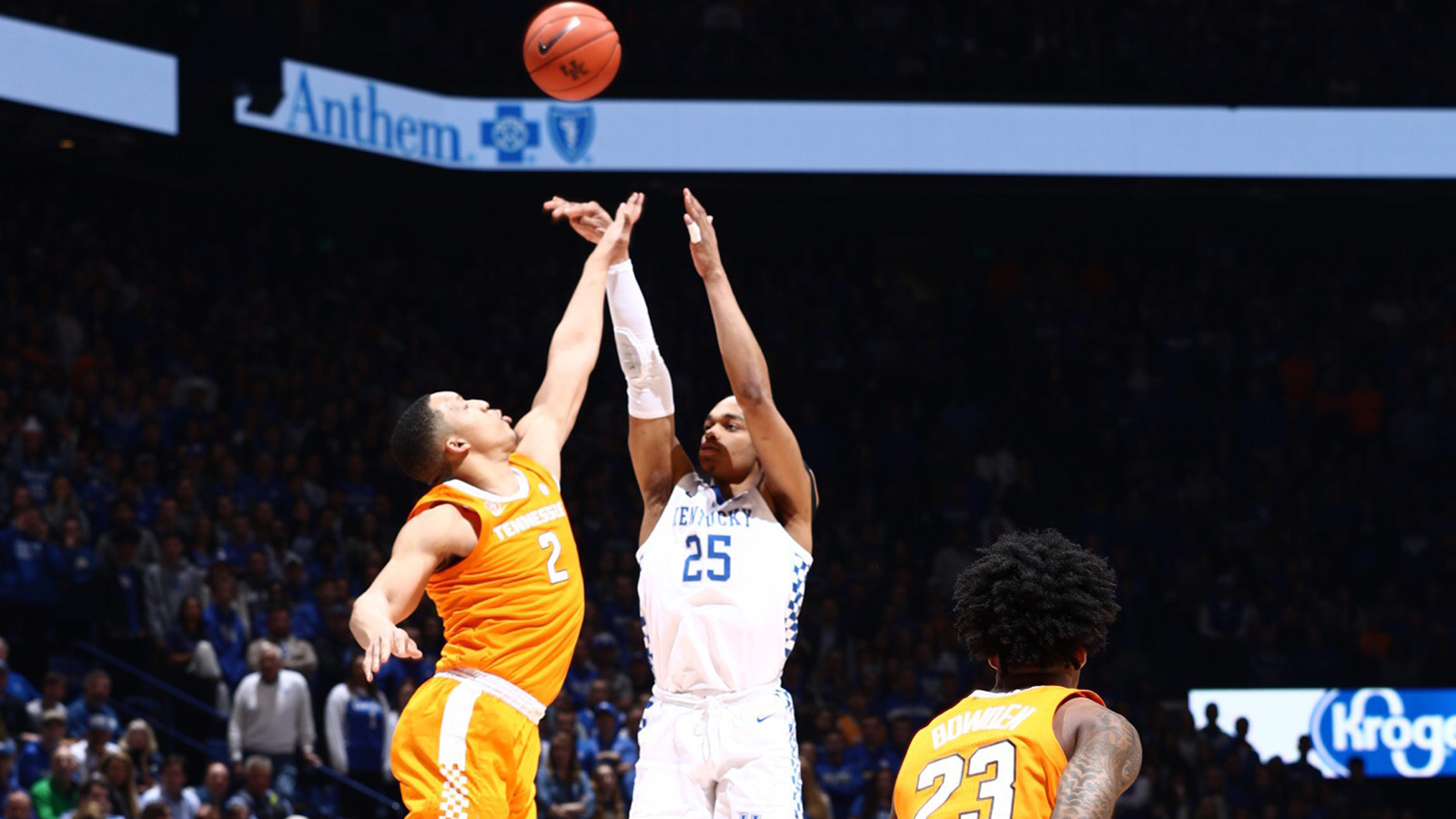 Even as his sophomore forward played the best basketball of his career, John Calipari didn’t hesitate to call out PJ Washington.

Steadfast in his belief that Washington has the ability to be the best player in the country, Coach Cal refuses to accept anything less.

He might not always enjoy Calipari’s prodding, but he’s responded to the repeated challenges anyway. And Saturday night, Washington took a big step toward proving him right.

“He’s doing some good stuff,” Calipari said. “I mean, you are looking at him now making shots and skilled with the ball and stuff that a year ago he couldn’t do. Making free throws, playing, sustaining effort, not floating and coming in and out.”

Washington was the best player on the floor in one of the most anticipated matchups of the college basketball season. Going up against top-ranked Tennessee (23-2, 11-1 SEC) and SEC Player of the Year frontrunner Grant Williams, Washington was outstanding in leading No. 5/5 UK (21-4, 10-2 SEC) to a dominant 86-69 victory before a crowd of 24,467, the third largest in Rupp Arena history.

“It’s really inspiring,” Washington said. “Just to go up against great players like that is a blessing. I love doing that and it brings the best out of me. I just get to see where I am and see where I need to improve. I’m just happy we got a W tonight.”

He was outstanding from the outset, shaking off an offensive foul on the game’s first possession to score UK’s first seven points. Washington finished with 23 points – his seventh game with 20-plus points in his last eight – five rebounds, two blocks and two steals.

Washington appeared on the way to a similar kind of night last year when UK traveled to Tennessee, posting 11 points, three rebounds, three blocks and two steals in the first half. His production pretty much ended there, along with UK’s hopes in the game, as Washington succumbed to leg cramps. The cramps came again this time against the Volunteers, but not until the very end of a game in which he played 31 minutes.

“PJ finishes first in every run we do right now,” Calipari said. “Every run we do, Kenny Payne’s screaming and yelling, don’t let him finish first and guys are trying to chase him down and he ain’t letting them. Now, let me explain. He wasn’t first last year.”

The change is paying off.

“I’m a lot more in shape,” Washington said. “I’ve been running a lot more. Just with Coach Kenny Payne, that’s pretty much all we do in our workouts is run and jump hooks.”

Washington put that jump hook to good use, as UK fed him early and often in the post. Using the length and athleticism that allowed him to, according to his own recollections, dunk every ball in high school, Washington has grown into a player who can do damage no matter how the opponent guards him.

“You know, what makes me happy is when I’m hearing people call me and say, Cal, he’s the most improved guy in the country,” Calipari said. “Like he is it. And a big part of that was conditioning and toughness and focus. And when you understand that it’s not going to be easy and there’s no easy road, that I’ve got to compete every day, you probably got it licked because you’re competing against yourself. You’re trying to conquer yourself.”

For the first season-plus of his college career, Washington befuddled his coaches and fans alike with wild swings in production from game to game. Now that those swings have given way to a steady ascent over the last month, it’s now clear that Washington’s inconsistency never had anything to do with the lack of a fire within.

Washington is well on the way to conquering himself, so that fire is on display every night.

“I’ve been a competitor all my life,” Washington said. “I just feel like I spent a lot more time in the gym this year and I want it more than I ever have. Just to be out here with these guys is a blessing.”