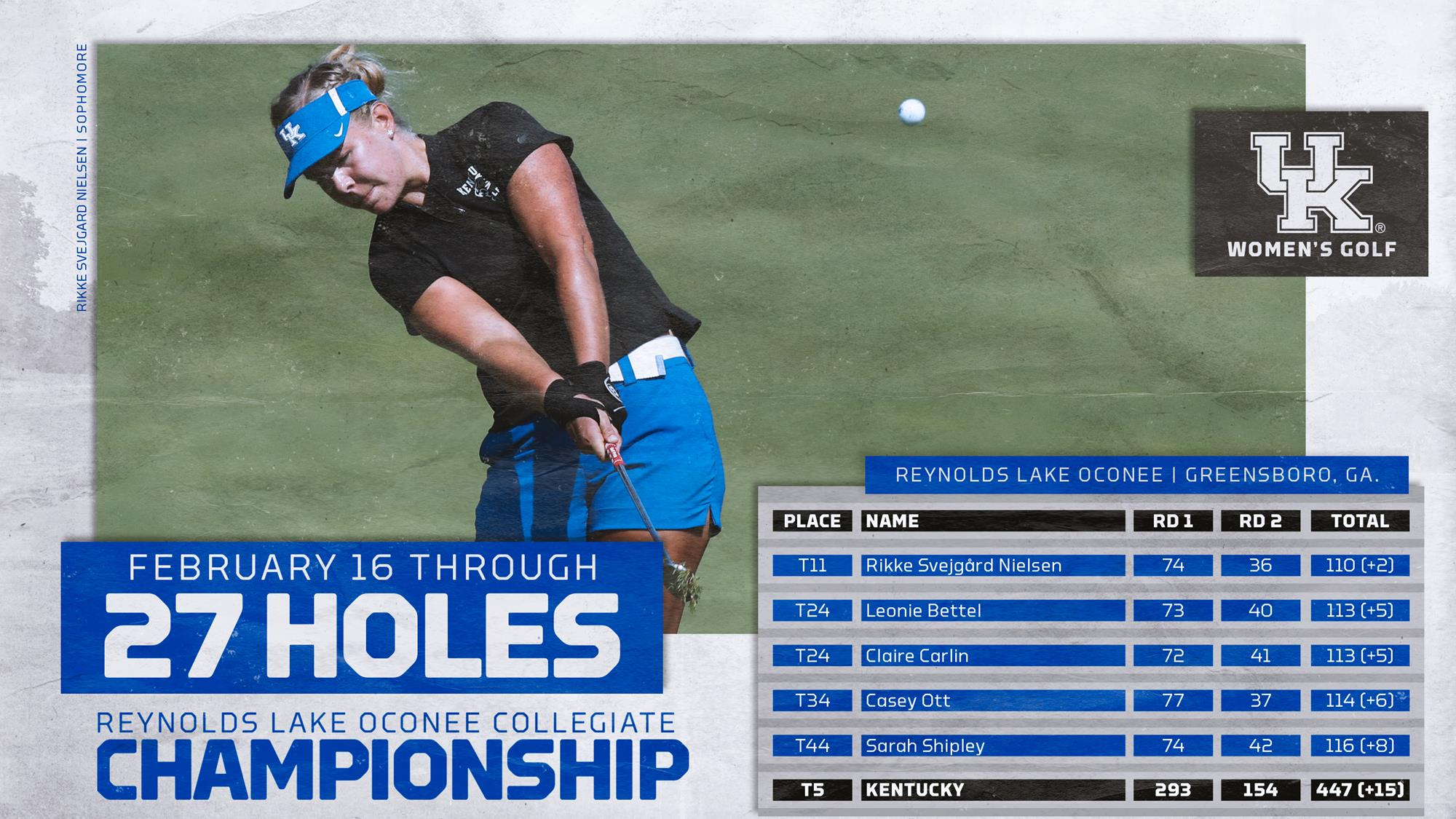 GREENSBORO, Ga. – In its first stroke-play outing of the spring season, the Kentucky women’s golf team is only five strokes over par through the first 18 holes of the Reynolds Lake Oconee Collegiate Championship and just five shots out of first place.

The Wildcats posted a score of 5-over-par 293 in the first 18 holes, which included an even-par round by senior Claire Carlin. Kentucky wasn’t as sharp on the final nine holes of the day and currently sits at 10-over midway through the second round. That put UK in a tie for fifth place overall at 15-over par headed into Sunday’s final 27 holes.

“Yesterday was an interesting day with the 27-hole format,” said head coach Golda Borst. “We made a great deal of birdies, but we need to continue to work to tighten up our mistakes. We gave away some shots that we would like back, but overall we are in position to compete hard over the next 27 holes. We have a lot of golf ahead of us and we need to continue to create opportunities for ourselves.”

The tournament will resume at 9 a.m. ET with a shotgun-style format. Live scoring will be available at Golfstat.com.

Kentucky faced stout competition Saturday. Texas Tech and host Mercer lead the field at 10-over par. No. 6 Vanderbilt is at 14-over par, tied with Chattanooga.

Senior Leonie Bettel, a two-time individual champion this season and an ANNIKA Award candidate, carded a 1-over-par 73 in the first 18 holes Saturday. In her remaining nine holes, she posted a 4-over-par 36. Bettel is tied for 24th at 5-over par through 27 holes.

Sophomore Rikke Svejgård Nielsen, who also holds an individual title this season, is in the best position for the Wildcats. She carded a 2-over-par 74 in the first round. In the remaining nine holes, she posted an even-par 36 by logging a par on each hole. Svejgård Nielsen is in a tie for 11th.

Carlin is tied for 24th. She posted Kentucky’s best score through the first 18 holes Saturday. The upperclassman dropped four birdies in the first round, including the par 3 third hole. Carlin couldn’t match her early momentum in the first nine holes of the second round, however, and is at 5-over par.

Junior Sarah Shipley tied for her fifth-best outing of the season, carding a 2-over-par 74 in the first round. A 6-over-par 42 foiled her momentum, however, and she is currently tied for 44th at 8-over par.

Freshman Casey Ott. who won last week’s Battle of the Bluegrass individual medalist honors, snagged a 5-over-par 77 in the first round. After a 1-over-par 37 to begin the second round, she’s tied for 34th at 6-over par. 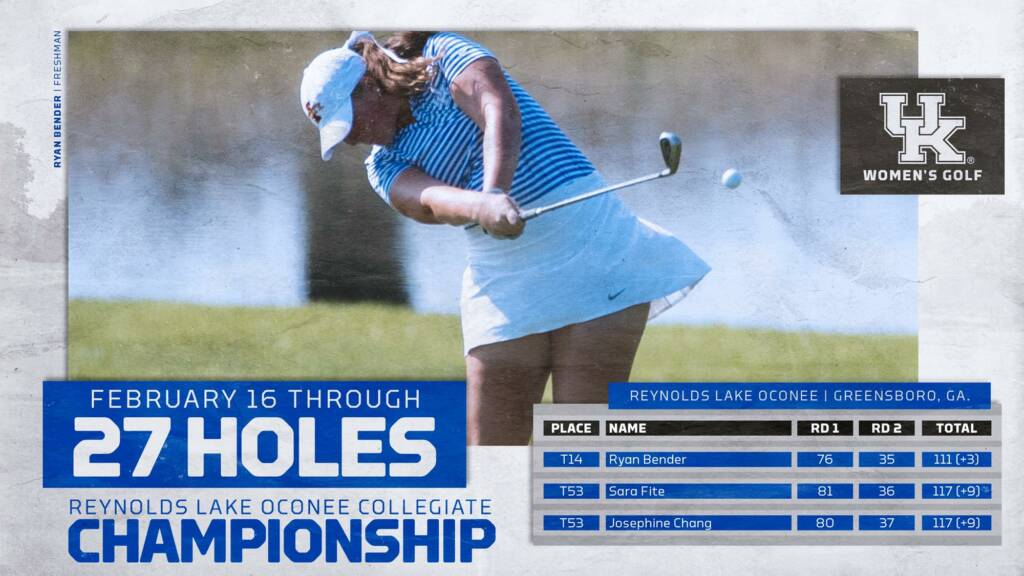 Freshman Ryan Bender, who is competing as an individual, logged a 4-over par 76 through the first 18 holes. She didn’t let off the gas in her next nine holes, earning a 1-under-par 35. She snagged even-par marks on eight of her final nine holes and logged a birdie on the No. 8 par-4. Bender’s 1-under-par 35 in the final nine holes was the best nine posted by a Wildcat Saturday.

Junior Josephine Chang finished the first round with an 80. She made a comeback in her next nine holes with a 1-over-par 37 through the first nine in the second round. Chang is tied for 53rd with sophomore Sarah Fite, who recorded an 81 in the first round but an even-par 36 in the remaining nine holes.

This weekend is Kentucky’s first appearance in the Reynolds Lake Oconee Collegiate Championship. The resort features two courses that are ranked in GOLF Magazine’s Top-100 Courses and are both considered top-10 courses in Georgia.

27 holes are in the books here @reynoldslakeoconee. Thanks to future Wildcat @jensen_castle for coming to watch us today! ??