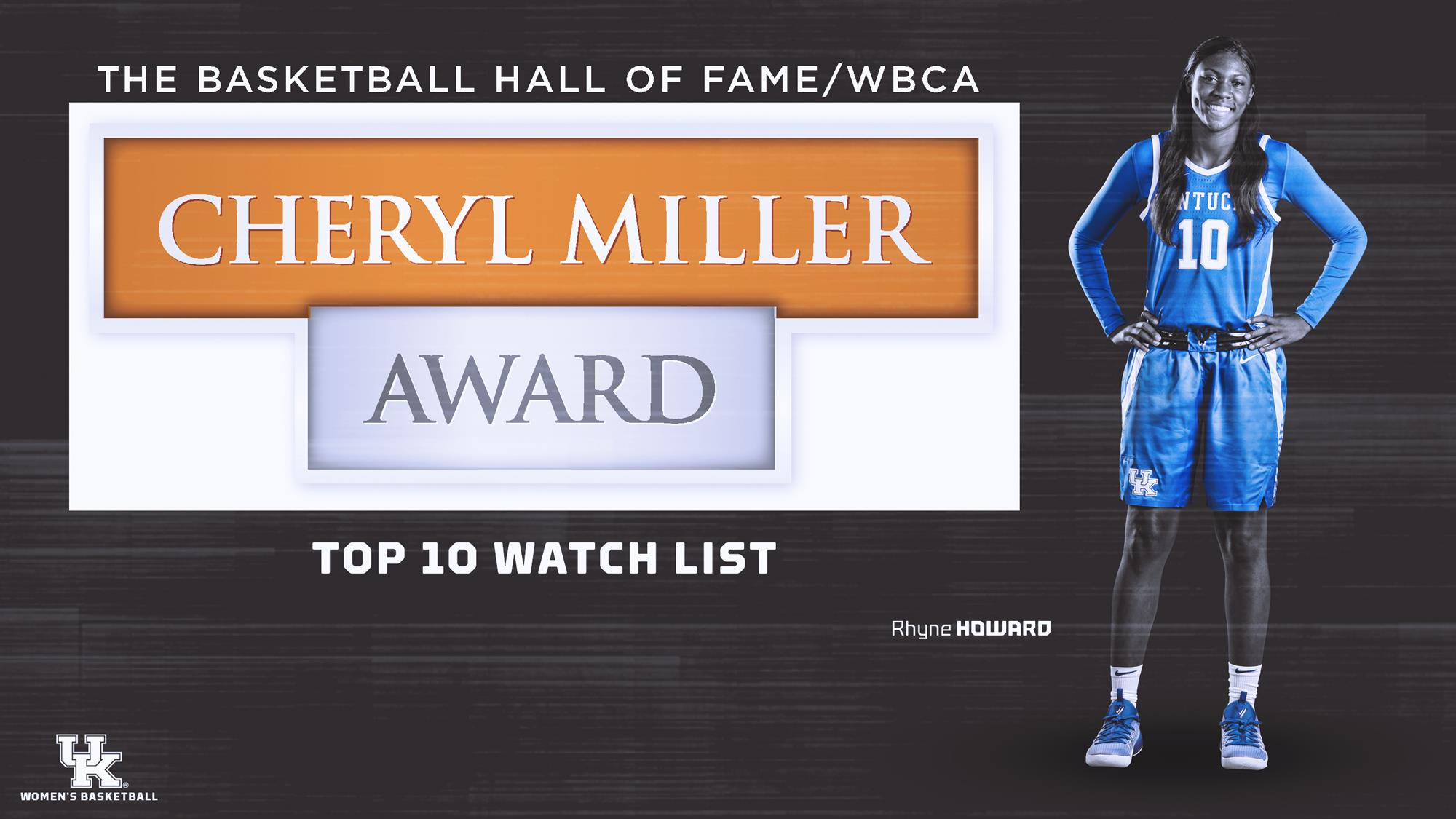 LEXINGTON, Ky. – A day after tying the Southeastern Conference record with her sixth freshman of the week honor, University of Kentucky freshman Rhyne Howard has been tabbed one of 10 finalists for the 2019 Cheryl Miller Award Watch List.

Named after the three-time Naismith Player of the Year and Class of 1995 Hall of Famer, the annual award in its second year and recognizes the top small forward in women’s NCAA Division I college basketball. Last season, Gabby Williams of Connecticut was named the inaugural winner of the Cheryl Miller Small Forward of the Year Award.

A national committee comprising top college basketball personnel determined the watch list of 20 candidates in October, which has now been narrowed to just 10. In March, five finalists will be presented to Ms. Miller and the Hall of Fame’s selection committee. Fans will also have the opportunity to vote for their favorite finalist at www.hoophallawards.com.

The winner of the 2019 Cheryl Miller Small Forward Award will be revealed in partnership with the WBCA at the Women’s Final Four in Tampa. Additional awards being presented and recognized at the WBCA Convention include the Nancy Lieberman Point Guard Award, the Ann Meyers Drysdale Shooting Guard Award, the Katrina McClain Power Forward Award, and the Lisa Leslie Center Award. Also being awarded is the Wade Trophy, the sport’s oldest and most prestigious national player of the year award which is presented annually by the WBCA’s community of coaches to the best player in college women’s basketball.

On Tuesday, Howard became only the second player in league history to earn freshman of the week honors six times during a season, tying Missouri guard Sophie Cunningham. Howard is only the second Kentucky men’s or women’s basketball player to earn six freshman of the week honors, joining Brandon Knight who claimed six honors during the 2010-11 season.

Howard is having a great season for Kentucky and it started with her becoming the first UK freshman in the Matthew Mitchell era to score at least 10 points in each of her first 10 games. She currently ranks first on the team in points per game with 16.8 and leads in rebounds per game with 6.6. She sits second in 3-pointers made with 60 and ranks second in steals with 53. Howard has scored in double figures in 20 games and has four double-doubles. She has scored 20 or more points in eight games.

Howard leads all SEC freshman in points per game by nearly six points and rebounds per game by two rebounds. She also leads league rookie in steals, while sitting second in 3-point field-goal percentage and assists.