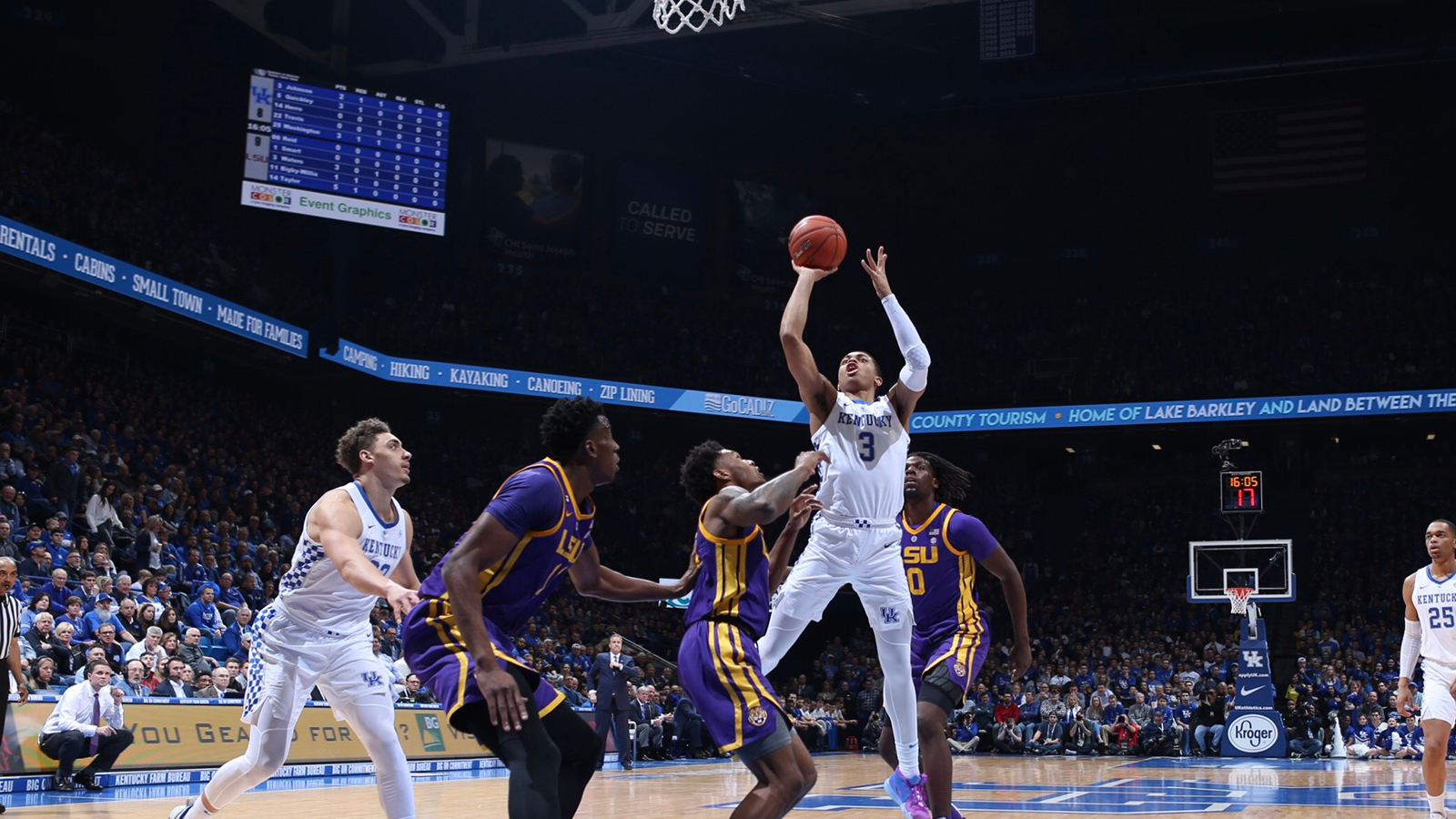 Cats Focusing on Own Mistakes, Not Final Play

The focus for almost everyone is on the way the game ended.

Considering the drama – a buzzer-beating LSU tip-in reviewed by the officials – that’s inevitable.

Just don’t count the Kentucky Wildcats themselves in that camp.

“Obviously it’s frustrating,” Reid Travis said. “We put ourselves in a great position. A call like that, you don’t know. It could go either way. At the end of the day, we should have made more plays to where it wasn’t out of our hands at the end.”

“My view on the last play was we never should have put ourselves in that position,” PJ Washington said. “We had a lot of breakdowns in the last five minutes. We can’t win games like that. We gotta get in practice and work on it.”

Washington had more big plays than breakdowns down the stretch, most notably when he scored five straight points to erase a five-point LSU lead with just over a minute left. He had 20 points for the game – his sixth game with 20 or more points in his last seven – but both Washington and his coach know the Cats should have put the game away earlier.

Those points came early in the second half, when UK led by nine points on four separate occasions. Each time, rather than getting a big stop and delivering a knockout blow, the Cats traded baskets. That allowed the Tigers to gain confidence after a shaky first half, which most clearly manifested itself on the glass.

“We lost the game because of it,” Washington said. “We just gotta rebound in the second half and that was just big for us. We didn’t get the job done.”

In the first half, UK dominated an athletic LSU team on the boards, 23-14, and held the Tigers to a mere three offensive rebounds in 20 opportunities and zero second-chance points. After the break, LSU won the rebounding battle, 18-16, and scored 12 second-chance points on six offensive boards.

“They’re good,” Travis said. “They’re physical. They rebound the ball really well, but we knew that on film and I feel like we did a great job of sticking with the scouting report in the first half. In the second half, we got away from that.”

Even so, UK managed to claw its way back in. The Cats even had the ball in the final minute in a tie game, only to watch Keldon Johnson’s floater rattle around and somehow pop out. Travis grabbed the miss, but his pass out was intercepted, depriving Kentucky of a potential final shot to win the game. After that, Tremont Waters and Johnson traded made free throws.

“I think we do ourselves a disservice to get hung up on one call,” Travis said. “We made a lot of mistakes down the stretch to where it shouldn’t have come down to that.”

Alas, it did, snapping a 10-game winning streak and starting a big week for Kentucky off with a loss. The good news is the week is only just starting, and with top-ranked Tennessee bound for Lexington Saturday, Washington only expects a tough loss to motivate the Cats.

“I know it will,” Washington said. “We felt like we should have won that game and we didn’t make the plays to win the game at the end of the game. We’re looking to bounce back Saturday.”