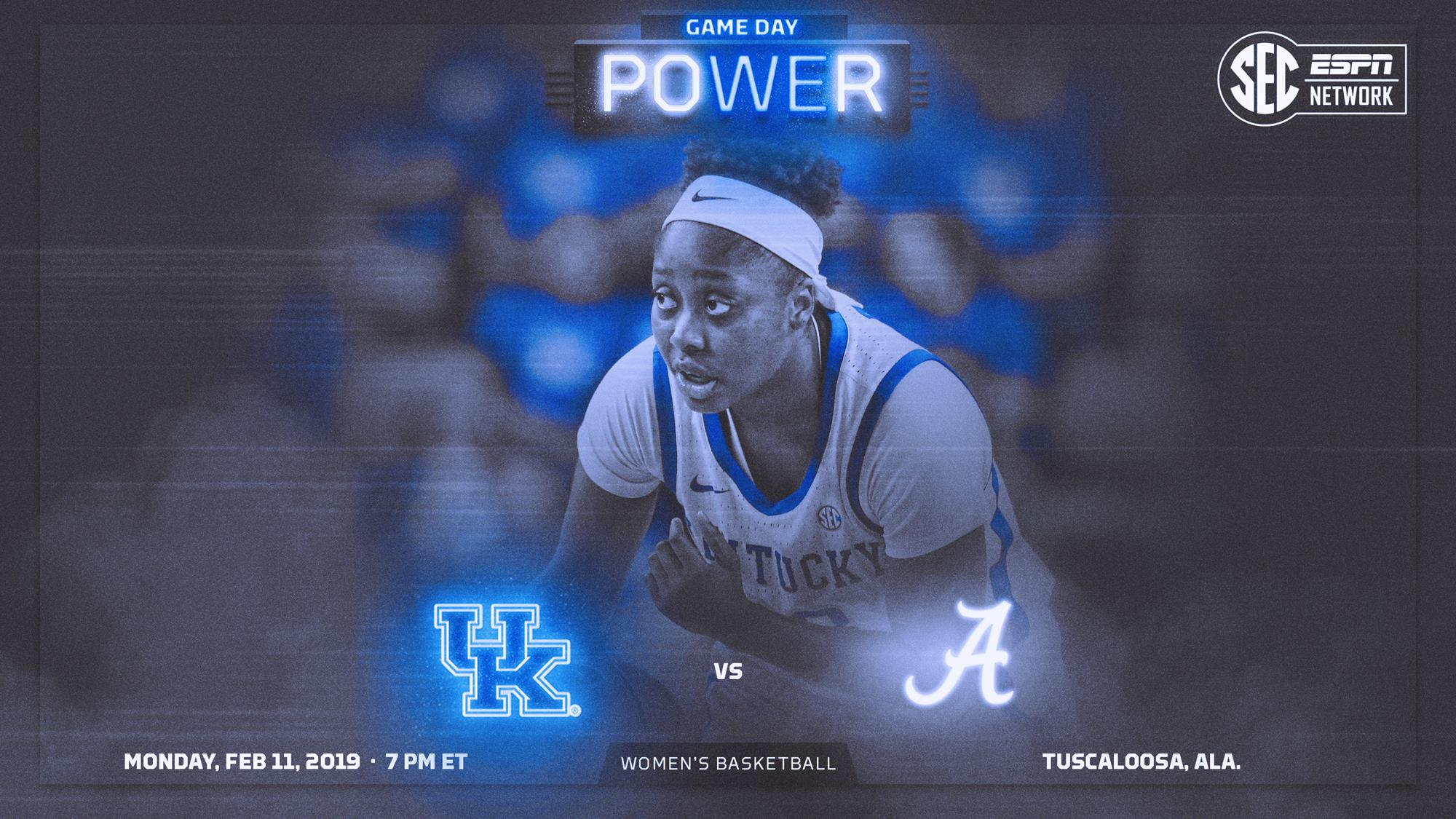 LEXINGTON, Ky. – The No. 19 University of Kentucky women’s basketball team will conclude its doubleheader in the state of Alabama on Monday when it travels to Tuscaloosa to take on the Alabama Crimson Tide at 7 p.m. ET inside Coleman Coliseum.

The game will be broadcast on SEC Network with Brenda VanLengen and Andraya Carter on the call. The action can also be seen through WatchESPN on computers, smartphones or tablets. Darren Headrick will have the call on the UK Sports Network on 630 WLAP in Lexington. Live stats and free live audio will be available online at UKathletics.com.

After four straight games of less than 40 percent from the field, Kentucky (19-5, 6-4 SEC) shot 51.9 percent against Auburn, including 11-of-20 from long range to earn a double-digit road win. UK hit its first eight 3 attempts and has now hit 10 or more 3s in seven games this season. Kentucky is 6-0 this season when it shoots 50 percent or better from the field and 13-0 this season when it shoots a higher percentage than its opponent.

After a 6-0 run by Auburn at the end of the first quarter and start of the second quarter, UK answered with a 14-0 run to take a 36-20 lead with 5:22 left in the half and force an Auburn timeout. UK’s 42 first-half points were the most in the first half of an SEC game this season. Rhyne Howard scored 19 points in the game hitting five 3s, while KeKe McKinney, Maci Morris, Taylor Murray and Blair Green also hit treys. Murray had 17 points with six steals, while Green had 12 points.

Howard leads the team in scoring averaging 16.5 points per game and is averaging a team-best 6.8 rebounds per game. The rookie is all over nearly every UK freshman single-season record, sitting fourth in points, second in points per game, fourth in rebounds per game, first in 3s, second in 3-point field-goal percentage, sixth in steals, fifth in double-figure scoring games and fifth in double-figure rebounding games.

Murray has been great for UK averaging 12.7 points per game while leading the squad with 87 assists and 78 steals. Murray is hitting 46.8 percent from the field and is averaging 3.3 rebounds per game. The senior ranks third in the SEC and 14th nationally in assist-turnover ratio, fourth in free-throw percentage and first in steals and steals per game. Fellow senior Maci Morris is averaging 16.1 points per game and has hit 60 3s this season. Morris ranks fourth in the league in field-goal attempts, sixth in field-goals made, seventh in points, ninth in points per game, third in 3s made, second in 3s made per game and first in 3-point field-goal percentage.

Alabama enters the weekend with a 11-12 overall record, including a 3-7 mark in conference play. The Crimson Tide is 8-4 at home this season but have lost each of its last two home games against highly ranked Mississippi State and LSU. After defeating Tennessee 86-65 on Jan. 17, Alabama has lost four of its last five conference games with the lone win coming at Georgia on Jan. 27, 58-53.

As a team, Alabama is averaging 65.8 points per game while allowing opponents to score 64.6 points per game. The Crimson Tide is hitting 39.1 percent from the field and 31.3 percent from long range with a +1.5 rebounding margin and -1.7 turnover margin.