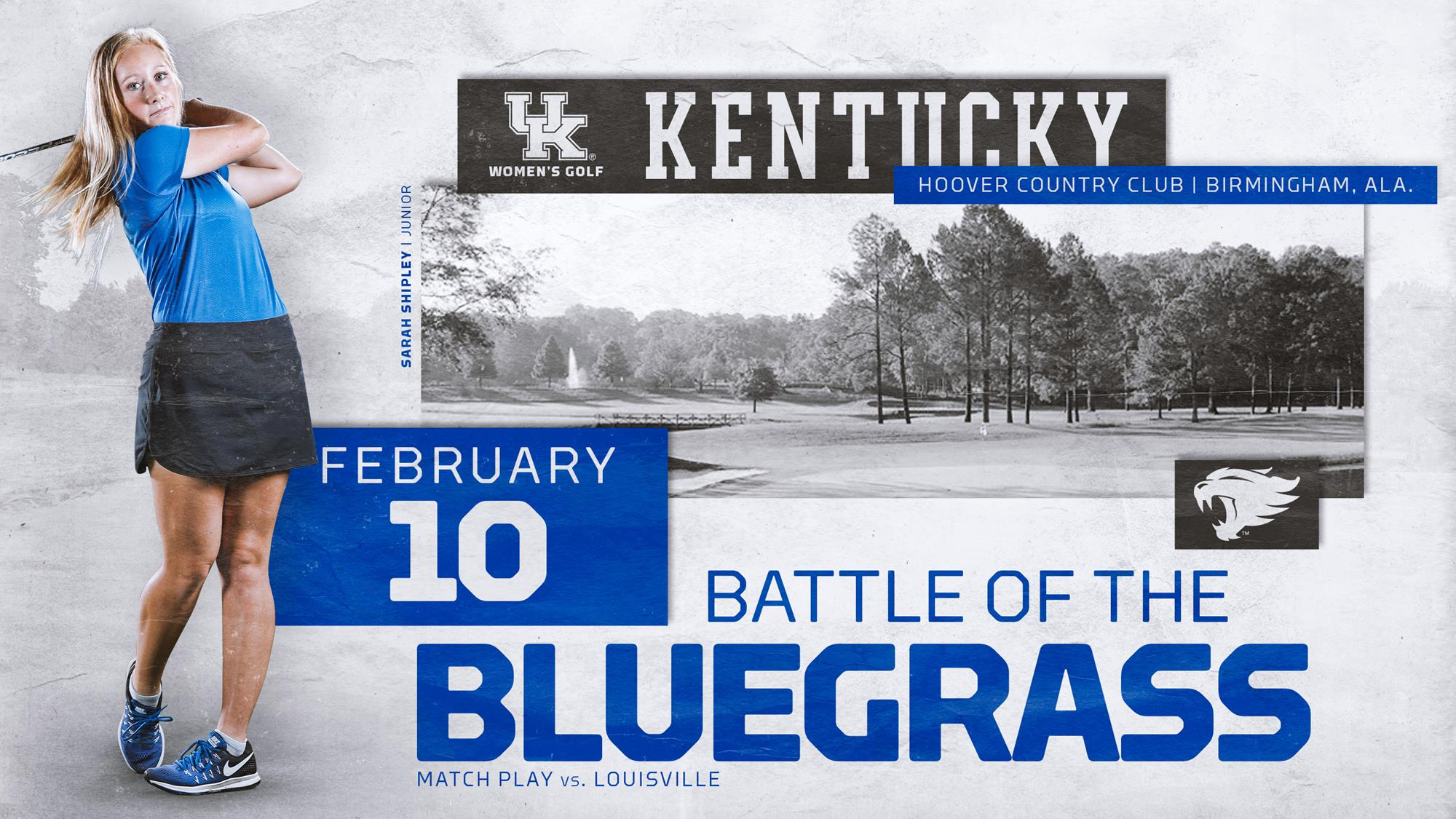 BIRMINGHAM, Ala. – Coming off an impressive fall season and led by a national player of the year candidate in Leonie Bettel, expectations are soaring for the Kentucky women’s golf team as it begins its spring season this weekend in the annual Battle of the Bluegrass.

The Wildcats will go head to head with Louisville in its annual dual match on Sunday in Birmingham, Alabama. The two teams will compete in an 18-hole best-of-five match play format, mirroring the final rounds of the Southeastern Conference Tournament and the NCAA Tournament.

Kentucky’s top five players in the fall (from a stroke-average perspective) – seniors Leonie Bettel and Claire Carlin, juniors Josephine Chang and Sarah Shipley, and sophomore Rikke Svejgård Nielsen – will compete in the team portion of the event at the Hoover Country Club in Birmingham, Alabama. Sophomore Sarah Fite and freshmen Casey Ott and Ryan Bender will compete as individuals.

The pairings will be decided Saturday night.

The individual champion will be crowned in a nine-hole shootout following match play, although the results will not be counted as official NCAA scores.

“We are ready to get the season kicked off this weekend,” UK head coach Golda Borst said. “We are doing a match play format this year to give our teams some more experience and we are looking forward to setting up the matches on Saturday night.

“We have a veteran lineup and I am glad to have the whole team with us competing. I think everyone on our team needs the experience and it will give us a better idea of where we are as a team as we hit the road for the next three weeks. It should be a competitive day and we can’t wait to get this rivalry weekend kicked off.”

The first match will begin at 9 a.m. ET. Live scoring will not be available for Sunday’s match.

The match vs. Louisville will begin a busy spring slate for the Wildcats, who will play in six spring events over the next two months before the postseason begins with the Southeastern Conference Championship.

UK, ranked No. 66 in the latest GolfStat rankings, has high hopes of returning to NCAA regionals for the seventh time in Borst’s nine seasons. Despite a tough ending in the fall at the Trinity Forest Invitational, the fall was in large part a successful one with a team championship at the Bettie Lou Evans Invitational – Kentucky’s first since 2013 – and three individual titles, including two from Bettel.

Bettel will headline the Wildcats’ lineup heading into the spring after winning the Mercedes-Benz Collegiate Championship in September and the Bettie Lou in October, becoming the first UK player to win two tournaments in a season since Lauri Berles in 1995-96.

A midseason watch list candidate for the ANNIKA Award, given annually to the national player of the year, Bettel heads into the spring with a sensational 70.6 stroke average and ranked No. 20 in the country in GolfStat’s player rankings. The single-season school record for stroke average is 73.42, set by Isabelle Johansson in 2016-17.

UK’s other individual title this season belongs to Svejgård Nielsen, who won the Morehead State Greenbrier Invitational at virtually the same time Bettel was getting ready to lift her hardware at the Mercedes-Benz Collegiate Championship.

Svejgård Nielsen has appeared in three events for UK in her first collegiate season and has the second-best stroke average at 74.1.

Just behind her is Carlin, the team captain, who tied for 19th at the Bettie Lou. She played in three events in the fall.

Chang has rebounded from nagging sophomore injuries and returned to her freshman form, when she fired eight rounds of par or better. Shipley, who led UK in stroke average in the spring of last season, tied for 14th at the Bettie Lou.

Individually, freshmen Bender and Ott will look to continue their strong starts as Wildcats. Ott appeared in all four events in the fall and Bender competed in three. They’ve combined for three rounds of par or better.

Fite will make her third appearance. She tied for fifth place at the Greenbrier Invitational.

Sunday’s match will take place at the Hoover Country Club. A private, member-owned and operated club that was established in 1959. It is located in the Green Valley-Star Lake area, where the rolling wooded landscape is made even more picturesque by peacefully meandering fairways of lush green grass and smooth, challenging greens. It will play as a par 72 with the yardage yet to be determined for Sunday’s match.

Of course, UK will return to Birmingham later in April for the SEC Championship, but first up is the Battle of the Bluegrass, followed quickly by the Reynolds Lake Oconee Collegiate Championship next weekend, Feb. 16-17, in Greensboro, Georgia.

“Our practices have been good,” Borst said. “We’ve really challenged our girls early this spring to bring the competitiveness to practice, to bring the focus, bring a different level of discipline, because we have no time to waste. Our schedule is going to kick off with three weeks in a row so we’ve really had to hit the ground running with practice, and they’ve done a good job with that.” 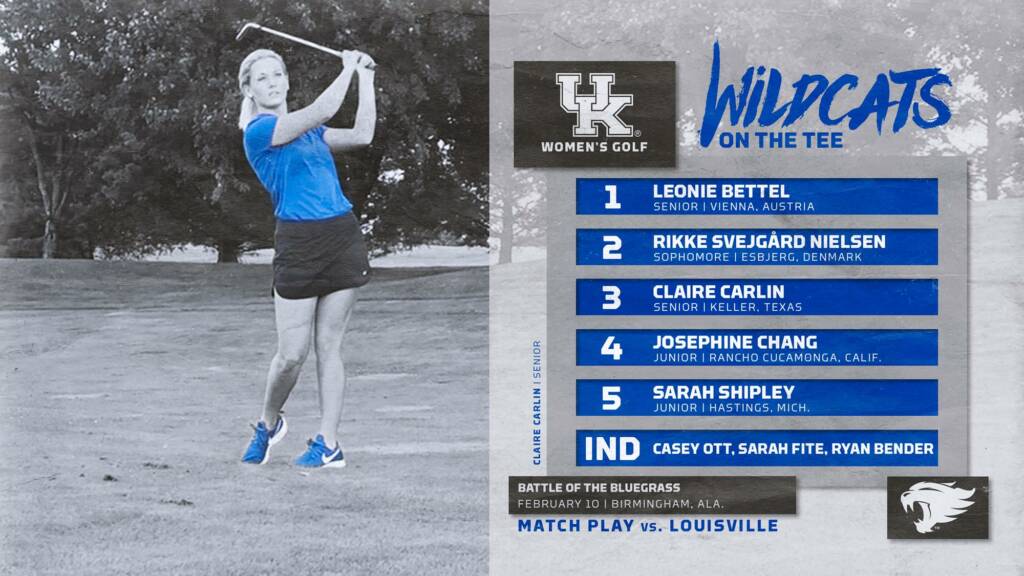