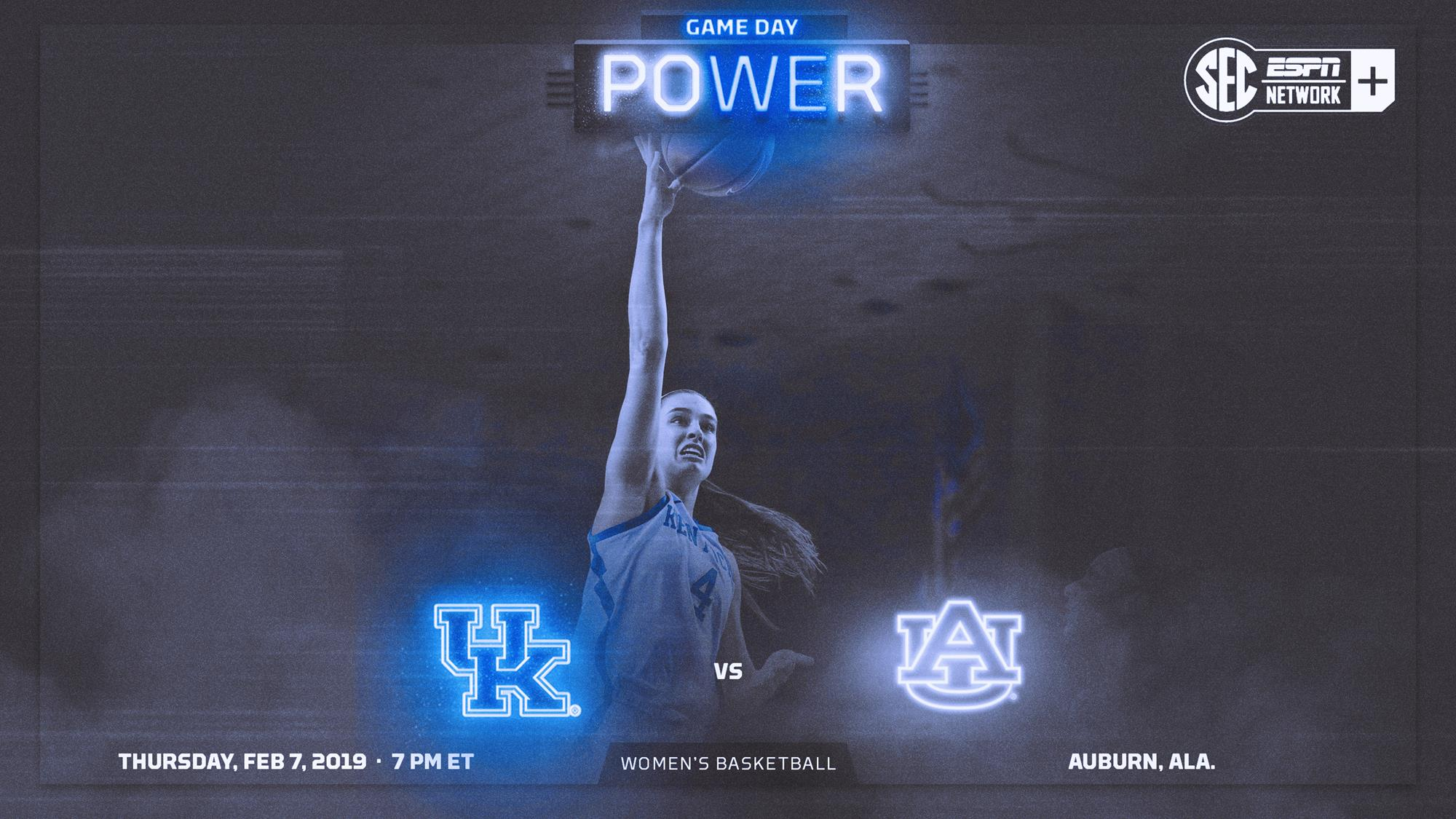 No. 19 Kentucky Hits Road, Travels to Face Auburn on Thursday

LEXINGTON, Ky. – After getting back in the win column with a victory over Florida in front of 10,000+ fans Sunday at Rupp Arena, the No. 19 University of Kentucky women’s basketball team hits the road for back-to-back games in the state of Alabama, starting Thursday at 7 p.m. ET at Auburn.

The game will be streamed on the SEC Network+ with Brad Law and Joe Ciampi on the call. The action can also be seen through WatchESPN on computers, smartphones or tablets. Darren Headrick will have the call on the UK Sports Network on 630 WLAP in Lexington. Live stats and free live audio will be available online at UKathletics.com.

After two straight losses Kentucky got back in the win column against Florida, earning a 62-51 victory in Rupp Arena last Sunday. The Wildcats got 16 points from Rhyne Howard and 13 from Taylor Murray in the win. UK forced UF into 24 turnovers and scored 31 points off those miscues while only shooting 31.7 percent from the field.

The Cats also won the rebounding battle against Florida and had a 16-8 edge in second-chance points. After being outrebounded in five straight games to start league play – including by 24 at MSU and 18 at UT – Kentucky has won the boards three of the last four games with the only loss coming by one rebound vs. South Carolina. UK has also earned a 65-35 edge in second-chance points in the last four games.

Head Coach Matthew Mitchell
Opening statement…
“Tough game tomorrow night versus Auburn. I respect so much of Auburn and the way they play. They’re always well-coached. What I really respect about them is that you know the intensity that they will bring and the challenge that they will present to you each game. We’ve had very tough games with them. The last three down there were decided by five or six points. It’s been really tough to try and go on the road and earn a victory from Auburn. So, they’re going to put a lot of pressure on the ball handlers. They’re going to take care of the basketball, and it is easy to talk about than it is to actually do on the court. They play as hard and with as much intensity as anyone in our conference. We have tremendous respect for them and it’ll be a very difficult game. We worked hard yesterday in preparation, we’ll work hard today and we’ll need to be very sharp to earn a victory tomorrow night.”

On playing well on the road in the conference this season…
“Well, it’s funny. No matter who we are playing it seems like it is always a game. The players have not demonstrated much give up and quit in them. Even this past Thursday night, we just lacked energy for such a large majority of the game, but then found some way to muster up enough to make a run to at least make it interesting at the end. Also, tremendous energy exerted on Sunday to earn a big victory over Florida. So, they are a resilient group, high character, and they work real hard. Whenever we take a step back like we did last Thursday with our energy and our effort versus South Carolina, they have shown the willingness to correct  their mistakes and fix their attitude and fix their, whatever is ailing us at that point in time. So, a lot of positives about our team and every game is a dog fight, but more times than not they have a lot of fight in them.”

On if the team has progressed enough to play different styles…
“Yeah, I think we have shown the ability to win a few different ways in the conference and that is important. You’d always like to impose your will on the game and you’d like for it to unfold the way that you had it planned before the game, and every now in that it works out that way. But, I do think you have to have the ability to adjust to whatever you’re presented with that night. You know, we couldn’t get the ball in the basket on Sunday. We just could not get a shot to go. We did a good job, after the first five minutes in the game we really settled into good shot selection and started working hard to execute well, but we just could not get the ball in the basket. So, a game can present you with different challenges and I think the team has responded well to be able to win a few games with different styles, so that is a plus and a bonus. So, you’d hate to think that a one-scenario unfold is the only path to victory… that makes it really difficult in our league with such great athletes and players and coaches. That makes it really hard to get it done. So, I’ve been very pleased with the team showing the ability to go on the road and defending the home courts at times. When you have it together, you have a pretty good team.”

On Maci Morris’ previous remarks on how you’ve increasingly improved your messaging and communication to the team…
“Well, I think all of us are working hard to improve. So, if we are telling prospects to come to Kentucky so they can improve, first as a person and a human being, and have this experience with depth to it and some  value to it that they can pull form that experience for the rest of your life, then I think we certainly as leaders, the coaching staff, we have to have that same philosophy in life. So, I’ve been trying to work hard to improve as a coach. In some ways it looks like I have been here a long time, and in some ways when you look at all the things where you can grow and get better, there are so many ways that I can improve as a coach. So, one thing is trying to find out how to communicate better, how to connect with people better, how to really bring a group of people together who are all different individuals and march forward as one, it is a very challenging proposition. So, we’ve done that successfully at times, but it still doesn’t’ get you in a situation where you can’t learn and you can’t grow. So, we’re just trying to grow, all of us here. Me, No. 1, I’m trying to get better and improve. So, Maci and I have been on quite a journey during her time here, so a lot has happened and there have been a lot of things that have happened that have forced me into looking into things that I needed to do better and improve. So, grateful for all that, and certainly grateful for Maci Morris and all the improvement that she has been willing to make in her career here.”

On how Auburn is similar or different to how Kentucky likes to play…
“Well, a lot of similarities. Probably more similarities than differences. Their way of applying pressure is a little bit more out of zone, a zone look, but once you’re a pressure team and you’re trapping, it really doesn’t matter how you get there  or how you start that process, the same things have to happen. You have to be able to trap the ball well, you have to be able to rotate,  you have to be able to get out of that situation and scramble and recover. And so, both teams believe in that, both teams believe in turning the opponent over, so it is always a real battle and I think from my standpoint, that is why I have so much respect for Auburn and how hard they play because it is not an easy way of going about it. There is a lot less difficult ways to approach the game, but they believe in it and they do a great job with it and they always give us a tremendous challenge to prepare for. So, maybe a little bit more zone concept from them than a man concept from us, although we are trying to pressure our zone as well, so many more similarities than differences.”
– GO CATS –
For more information contact:
Evan Crane; wesley.crane@uky.edu; (859) 257-8431
Cami Moore; camiran.moore@uky.edu; (859) 257-8431