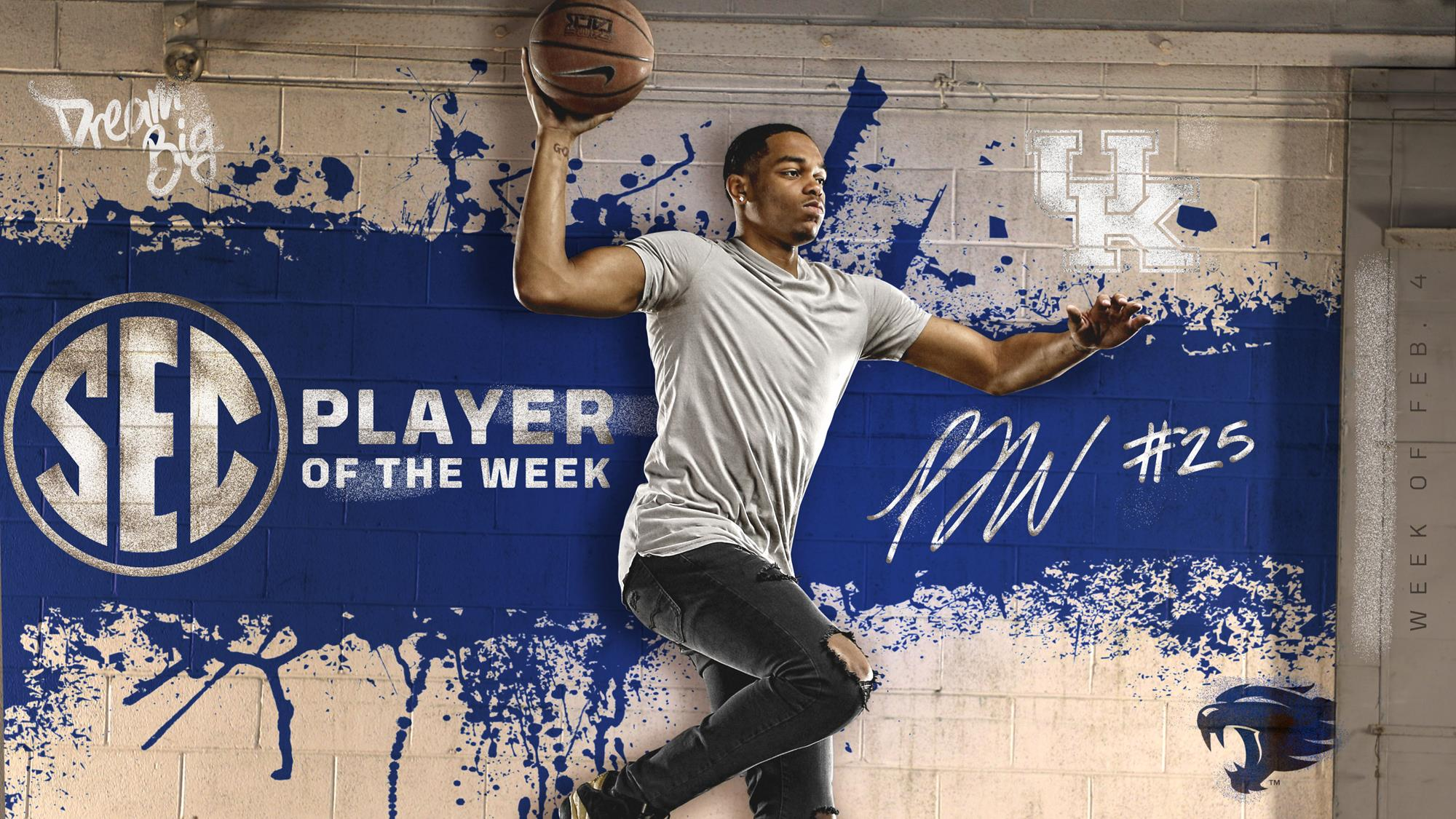 BIRMINGHAM, Ala. – After dominating the Southeastern Conference Freshman of the Week honors this season, the Kentucky men’s basketball team – specifically PJ Washington – stepped it up a notch and took a share of this week’s SEC Player of the Week accolade.

Washington was named SEC Co-Player of the Week alongside Tennessee’s Jordan Bone after leading Kentucky to road victories at Vanderbilt and at Florida. The sophomore forward averaged team highs in scoring (20.5 points per game) and rebounding (10.5 rpg) to extend UK’s season-best winning streak to eight games.

It’s the fourth week in a row a Wildcat has won an SEC weekly honor but it marks the first time this season a UK player has won SEC Player of the Week. Kentucky has won a league-leading seven SEC Freshman of the Week honors this season with three going to Keldon Johnson, two to Ashton Hagans and two to Tyler Herro.

Kentucky has won more weekly SEC honors (97) than any other school during the Calipari era, including 78 SEC Freshman of the Week honors and 19 SEC Player of the Week awards. A bit surprisingly, however, is that Washington is the first UK player to win SEC Player of the Week since Isaiah Briscoe won a share of it Jan. 2, 2017, following the third triple-double in school history.

It’s also the first career SEC honor for Washington, who is playing the best basketball of his career.

Washington opened the week with a game-high 26 points, 12 rebounds and a career-high-tying three steals in an 87-52 rout of Vanderbilt. He had 18 points and eight boards at halftime and helped limit the Commodores to just 15 first-half points. It was his third straight 20-point game and his second straight 20-10 game, becoming the first player since Julius Randle in November 2013 to achieve back-to-back 20-10 efforts.

Backing up his head coach’s assertion earlier in the week that he’s not going to let him slip back from his dominating play, Washington continued to impose his will with another double-double in the 65-54 come-from-behind win at Florida. Washington posted 15 points and a game-high 12 rebounds at Florida to lead UK out of an 11-point second-half hole.

It was the third straight double-double for Washington, the first time that’s happened since Randle went for four straight in March 2014.

Washington has emerged as Kentucky’s leader as it rides its longest winning streak since the end of the 2016-17 season. The 6-foot-8 forward is averaging 20.5 points, 10.8 rebounds and 1.8 blocks while shooting 51.7 percent and 46.2 percent from behind the arc over the last four games.

For the season, Washington is averaging 13.5 points, a team-best 8.4 rebounds and 1.2 blocks per game, all career highs. He’s shooting 51.3 percent from the floor and has made 17 3-pointers already this season on 40.5-percent shooting after making just five at 23.8-percent rate in his freshman campaign.

The Wildcats return to action Tuesday at 7 p.m. ET vs. South Carolina in Rupp Arena. That game will be televised on the SEC Network. It’s the lone regular-season matchup with the Gamecocks this season.