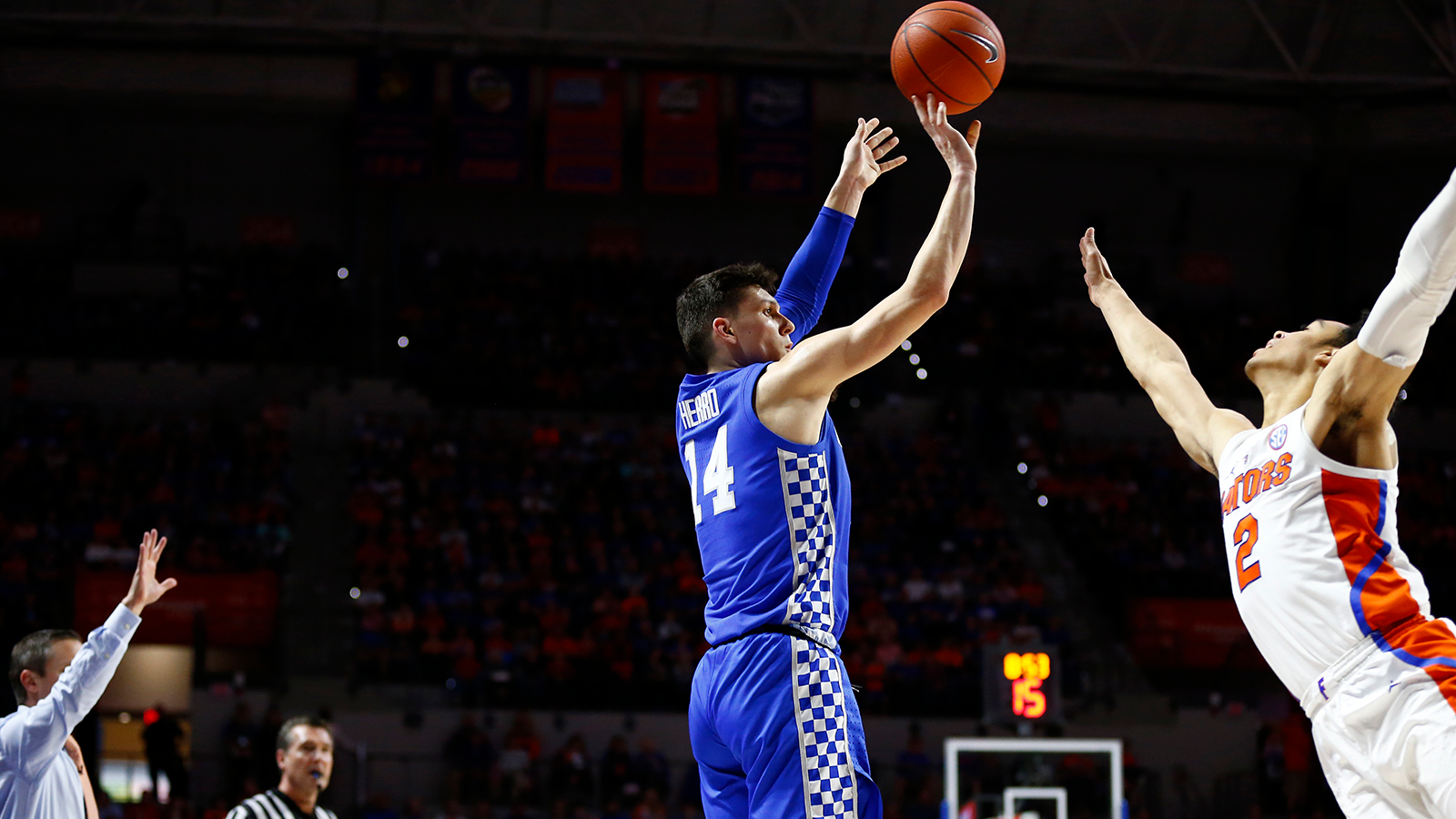 No. 7 Cats Claw Past Gators in Gainesville

GAINESVILLE, Fla. – PJ Washington didn’t have to say anything to his Kentucky teammates.

They all knew the situation: trailing by 11 points on the road with 13 minutes to play. They all knew what had to happen: lock down on defense or lose for the first time in a month.

Washington simply set the tone for everyone else to follow.

Washington finished with 15 points and 12 rebounds, Tyler Herro knocked down a dagger 3-pointer with about 3 minutes remaining, and the No. 7 Wildcats rallied to beat Florida 65-54 on Saturday.

Kentucky used a 14-0 run during a 5-minute span late in the second half to turn the game around. Herro came up big in the spurt, scoring five points and finding Keldon Johnson in the corner for a 3.

Herro’s clutch shot from behind the arc made it 55-48 and sent Florida fans scrambling for the exits. Herro finished with 19 points and six boards.

That’s eight in a row and seven straight in the league. pic.twitter.com/sOoAp7x692


But it was the Wildcats’ defense that deserved more of the credit, with Washington leading the way.

Kentucky started switching on every ball screen, preventing Florida from getting to the lane and forcing tough, long-range shots. The Gators made 9 of 33 shots in the second half, including just 1 of 9 from 3-point range, and scored a measly dozen points in the final 13:53.

The Gators entered the game in desperate need of a resume-building victory. They ended the day looking more like an NIT team than an NCAA Tournament invitee.

Washington and Herro prevented the Wildcats from a disappointing road loss.

Herro made 6 of 8 shots, including 3 of 4 from 3-point range, and Washington was 6 of 13 from the floor. Washington fell short of his third straight 20-point, 10-rebound performance — but ended up with his seventh double-double.

“He’s built his own confidence,” Kentucky coach John Calipari said. “He’s taking control of games. He’s coaching players on the court. I’ve been waiting a year and a half for this.”

The Gators looked like they might pull away early in the second half. They used a 9-0 run to build an 11-point lead. Kevarrius Hayes was instrumental in the spurt, getting a putback, taking a charge and plucking an offensive rebound in three consecutive possessions.

Kentucky went nearly 6 1/2 minutes without a point, and turnovers were a big reason for the drought.

But the Wildcats settled down, and the Gators went cold.

“We got a little stagnant, so a lot of shots were heavily tested,” Hayes said.

Andrew Nembhard led the Gators with 12 points, but just two in the second half. KeVaughn Allen and Jalen Hudson added 11 apiece. Allen and fellow guard Noah Locke combined to make 3 of 14 from 3-point range.

Kentucky: Defense continues to be the key to the Wildcats’ winning streak. Kentucky has held five opponents, including Florida, to 55 or fewer points during the last eight games.

Florida: The Gators can look solid at times, but they have way too many cold-shooting spurts to be more than a middle-of-the-pack SEC team.

Kentucky will maintain its top-10 ranking in The Associated Press college basketball poll.

Former Florida standout and current Memphis Grizzlies forward Chandler Parsons sat courtside. Parsons is not playing while he waits to be traded.

Kentucky continues its toughest stretch of the SEC schedule against South Carolina at home Tuesday. The Wildcats follow that with games at No. 22 Mississippi State and back home against two more SEC front-runners: 19th-ranked LSU and top-ranked Tennessee.

Florida plays four of its next five on the road, a make-or-break stretch that begins at recently ranked Auburn on Tuesday. The Gators also have road games against No. 1 Tennessee, Alabama and 19th-ranked LSU upcoming.