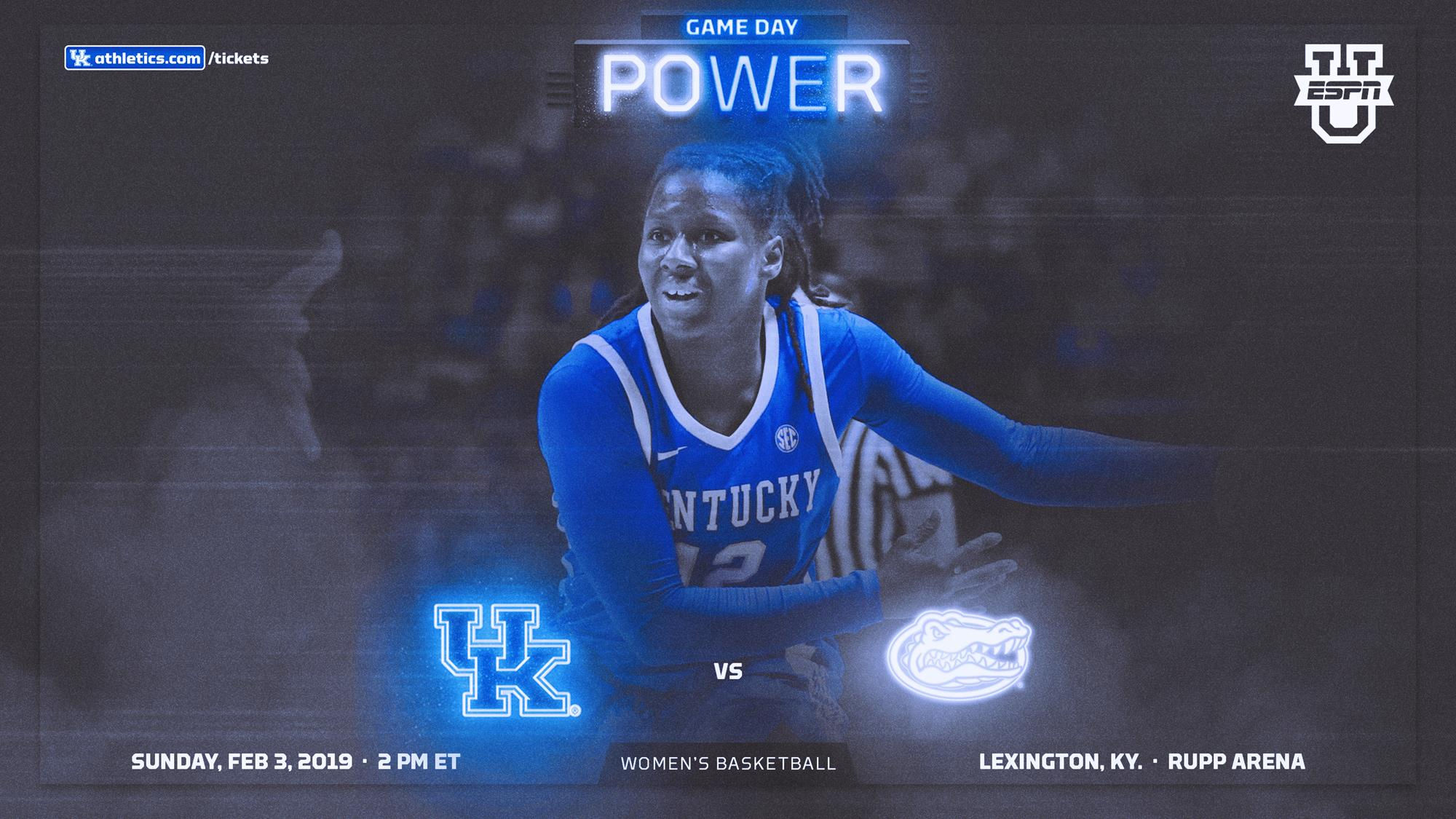 No. 19 Kentucky Ends Home Stretch vs. Florida at Rupp Arena

LEXINGTON, Ky. – Looking to get back to its winning ways after back-to-back close losses to top-25 ranked teams, the No. 19 University of Kentucky women’s basketball team plays its second and final game of the season inside historic Rupp Arena on Sunday at 2 p.m. ET vs. Florida.

The game will be televised live on the ESPNU with Roy Philpott and Brooke Weisbrod on the call. The action can also be seen through WatchESPN on computers, smartphones or tablets. Darren Headrick will have the call on the UK Sports Network on 630 WLAP in Lexington. Live stats and free live audio will be available online at UKathletics.com.

Single-game tickets are $10 (all ages) in reserved seating areas, while general admission tickets are $8 for adults and $5 for children (ages 6-18) and seniors (age 65+). Free pom-poms will be available for fans as they enter Rupp Arena. Redshirt junior guard Amanda Paschal is scheduled to sign autographs on the concourse following the game

The Wildcats are 26-18 all-time in Rupp Arena but have lost five of their last six games played in the arena. UK went 0-3 last season but defeated Atlantic Coast Conference foe Virginia in Rupp Arena earlier this season, 63-51. UK has played at least one game in Rupp Arena since the 2011-12 season.

Kentucky (17-5, 4-4 Southeastern Conference) is coming off back-to-back losses for the first time this season. Both setbacks came to top-25 teams, falling at Texas A&M and in Memorial Coliseum to No. 16 South Carolina. Senior guard Maci Morris scored 22 against the Aggies and 21 against the Gamecocks to lead the Wildcats, while freshman guard Rhyne Howard had 16 against USC and 21 against TAMU. Kentucky lost both games by a combined six points.

Florida enters the weekend with a 5-16 record, including a 1-7 mark in league play. The Gators are 0-9 away from home this season and have lost four straight games. Sunday’s game is the final of a two-game road swing for the Gators, who played at Tennessee on Thursday and lost, 67-50. UF’s lone league win this season so far came at home vs. Missouri.

The Gators are shooting 36.5 percent from the field this season, including a 29.8 mark from long range. The Gators make 7.7 3-pointers per game and have attempted 544 treys on the year. Florida averages 60.6 points per game, has a -1.6 turnover margin and an even rebounding margin with 37.2 boards per game.

Kentucky leads the all-time series in games played against Florida, 30-25, including a 15-10 mark in games played in Lexington. The Wildcats have won three straight games against the Gators in the series, including five of the last six games. Florida’s last win in Lexington came on Jan. 5, 2014 when it defeated UK, 83-73.