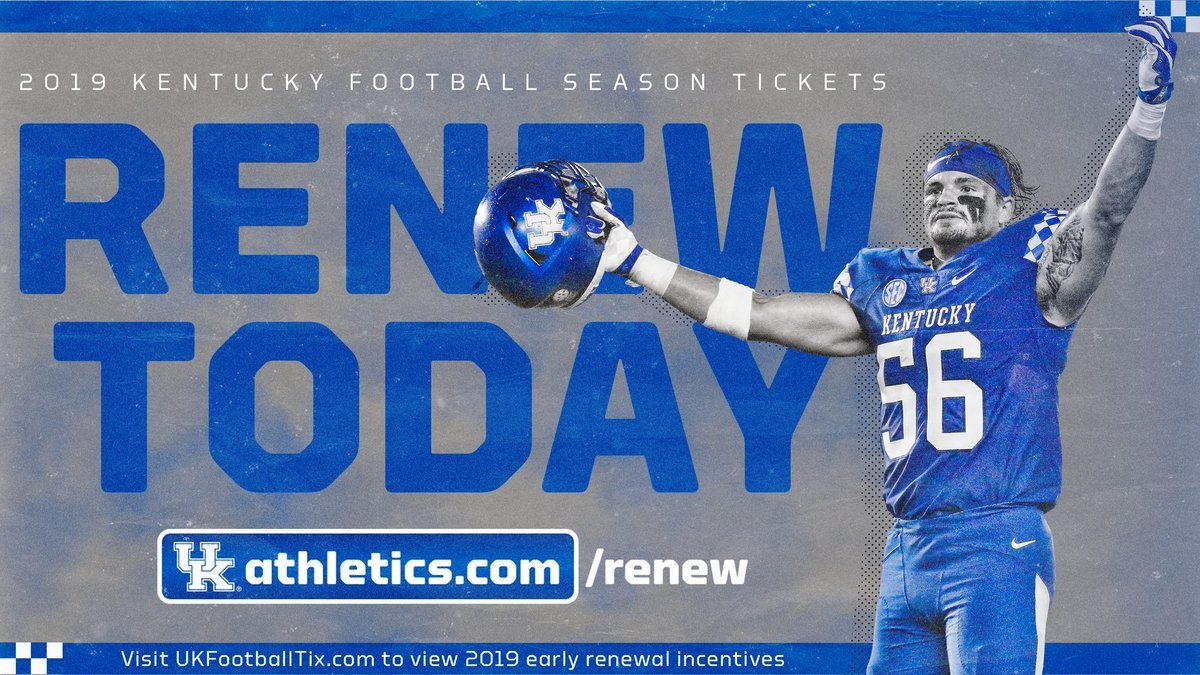 Fans renewing their season tickets can still do so before the end of the Early Signing Period this Friday. Season ticket holders who renew during the Early Signing Period will be able to lock in their 2019 tickets and parking at 2018 prices, plus the addition of sales tax. Renewing by Friday will provide the opportunity to receive eight home games for the price of seven. After Friday, renewals will be available at standard pricing.

Renewals are available online through each season ticket holder’s My UK Account at UKathletics.com/renew, while paper invoices will be mailed in late February.

New season tickets will go on sale to the public Feb. 8 through the Kentucky Football Virtual Venue. This interactive site allows fans to view seats and work together with a personal ticket representative to compare and purchase available seat locations. Fans can gain priority access to the best seat locations prior to the public on-sale date and earn exclusive incentives by placing a $50 per seat deposit or by contacting the UK Sales Office at (800) 928-2287 (Option 1).

Benchmark 2: Renew or purchase by Mar. 8:

**Bonus K Fund priority points will be added Feb. 1 to all accounts and will count towards priority rankings for the 2019-20 men’s basketball upper-level seat selection process. Visit UKathletics.com/RuppRenovation for more information.

Single-game ticket information will be released at a later date. A variable pricing model implemented based on fan feedback will be in place based on seating location and opponent to best reflect the value of each ticket and protect the investment of season ticket holders.

Student season ticket information for 2019 will be released at a later date at UKStudentTix.com, and students will receive more information by email in the spring.

The Kentucky football team finished the 2018 season ranked No. 11 in the Amway Coaches Poll, the program’s first ranking in final polls since the 1984 season and its highest since the 1977. The Cats’ record after defeating Penn State in the Citrus Bowl is 10-3, giving UK just the third 10-win season in school history.