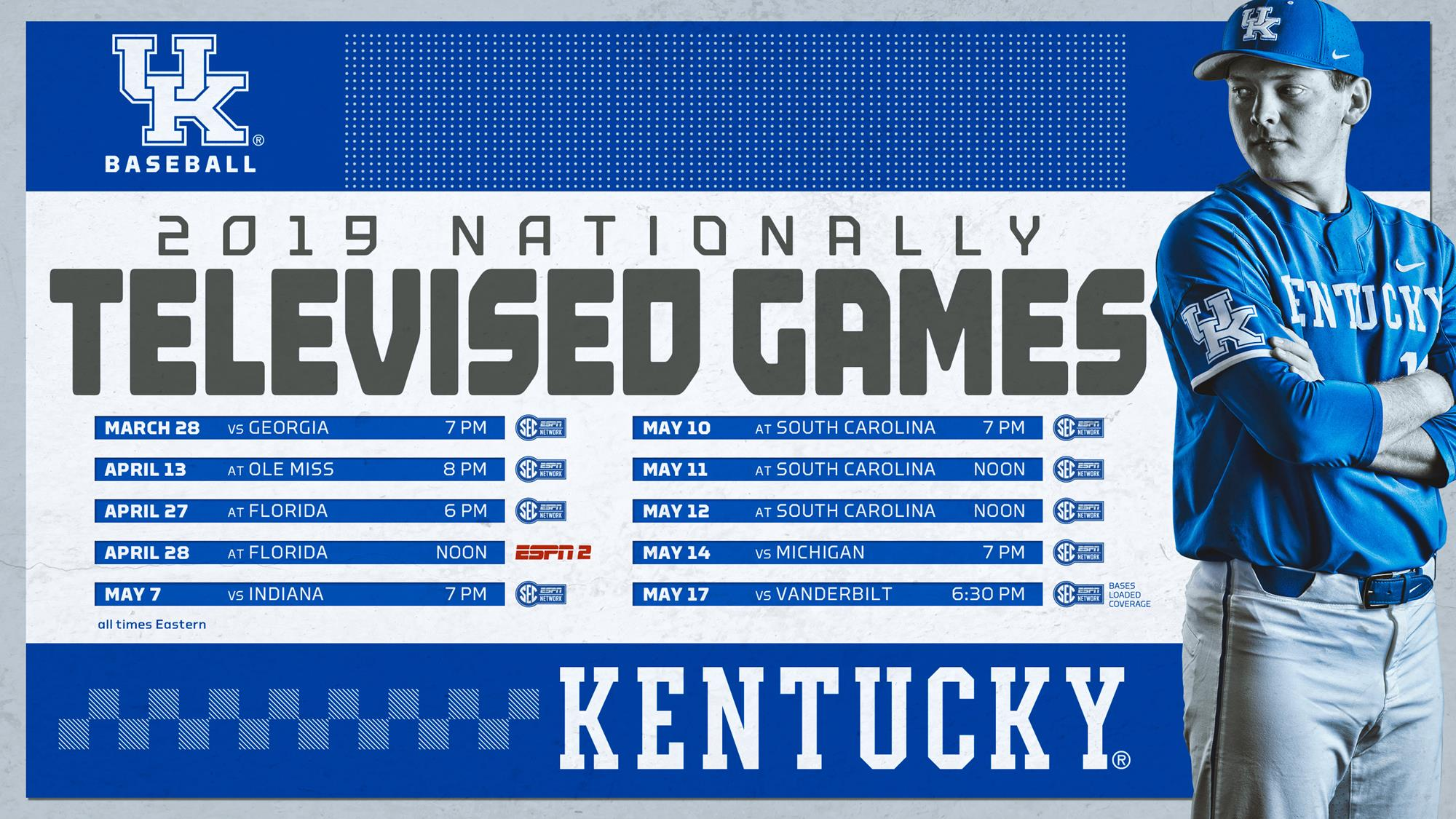 LEXINGTON, Ky. – The Kentucky baseball team will be featured on national television nine times this season, including the Southeastern Conference’s Thursday night showcase game, the league announced on Wednesday. Additionally, all of the Wildcats’ 32 home games and 30 conference games will be available via SECN+.

Kentucky opens the season on Feb. 15 at Austin Peay as part of a 2019 schedule that will test the club from start to finish. The 56-game slate features 35 total games against 14 teams who made the NCAA Tournament last season and 24 against teams ranked in Baseball America’s preseason Top 25, including 20 vs. the Top 15 – 13 of which will be on the road – and nine vs. the top five.

The Cats first appear on national television when Georgia comes to Lexington on Mar. 28. Airing on the SEC Network, the game is the league’s featured Thursday night game that week. UK also will appear on the SEC Network on April 13 (at Ole Miss), April 27 (at Florida), May 7 (vs. Indiana), May 10-12 (at South Carolina) and May 14 (vs. Michigan). The April 28 game at Florida is slated for ESPN2.

After a six-game road swing to begin the season, including a trip to Big 12 power and preseason top-five Texas Tech, the Wildcats will officially open their $49 million new stadium on Tuesday, Feb. 26 when Eastern Kentucky comes calling. The game begins a 12-game homestand that kicks off a 32-game slate in the Cats’ new digs, which is nestled along Alumni Drive adjacent to the John Cropp Stadium and the Wendell & Vickie Bell Soccer Complex and across the street from Kroger Field and the Joe Craft Football Training Center.

“Once again, we will be tested against one of the most difficult schedules in the country,” UK coach Nick Mingione said. “You learn a lot about your team when it’s challenged and we’re looking forward to the opportunity to earn our success on the field against elite competition. This is why you come to Kentucky. We can’t wait to get going.”

Among the 35 games against teams who made the 2018 NCAA Tournament are 15 against Super Regional teams and nine against teams that advanced to the College World Series. Thirteen of the final 14 games of the regular season are against 2018 tournament clubs, including midweek non-conference showdowns with Indiana (May 7) and Michigan (May 14), a preseason top 25 team that was the lone team in the stretch not to make last season’s NCAAs.

The SEC Tournament again will be held in Hoover, Alabama, and run from May 21-26, with the NCAA Tournament opening play on May 31 with the regional round.

UK is 77-45 in Mingione’s first two seasons as head coach, reaching the school’s first-ever Super Regional in 2017. After seeing 21 players selected in the Major League Baseball Draft the past two summers, the most in the nation, the Cats will feature new faces in 2019 to go along with left-handed pitcher Zack Thompson, who played with the USA Baseball Collegiate National Team last summer, and junior power threat T.J. Collett.