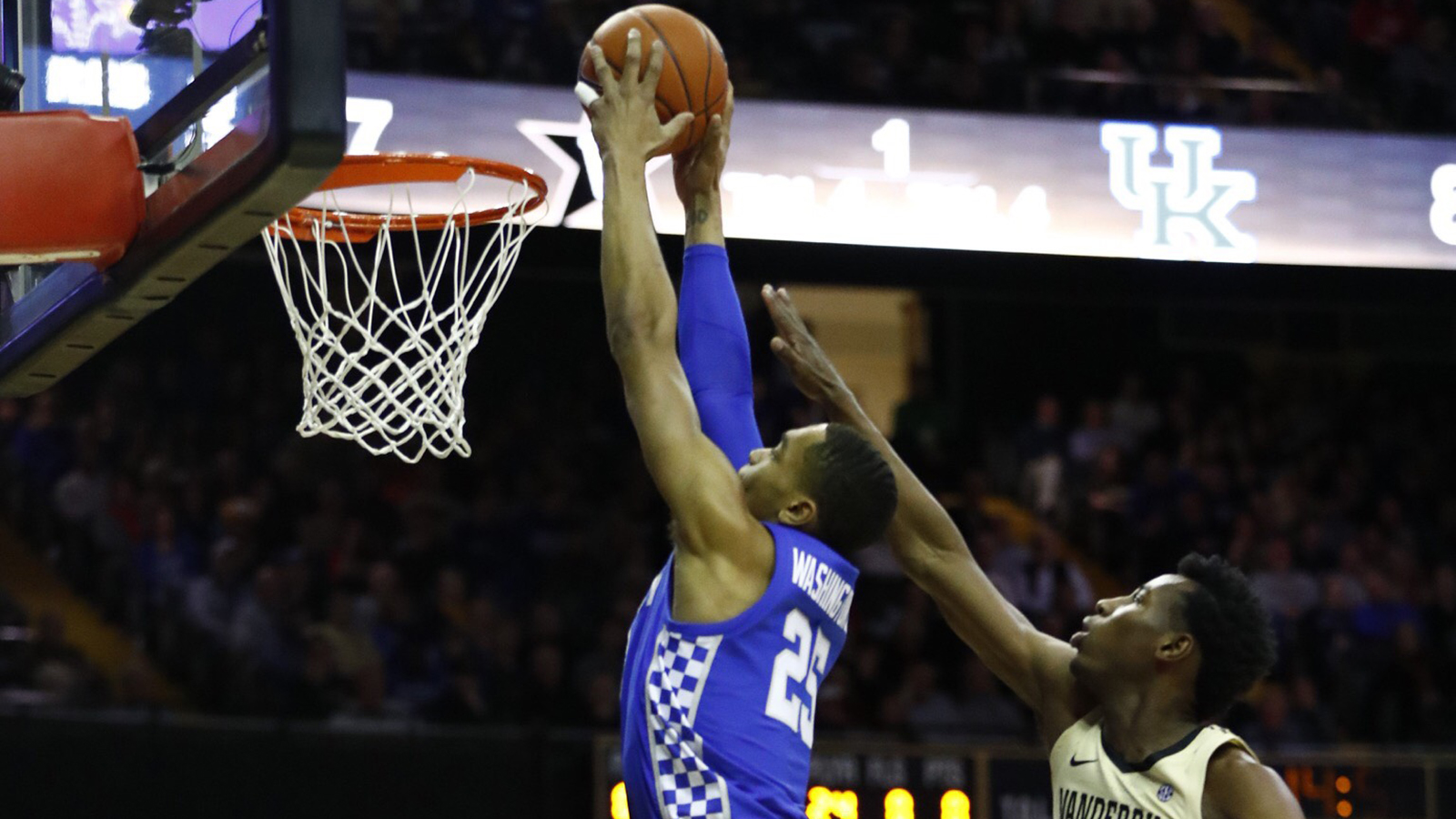 No. 7 Cats Slam 'Dores in Nashville

NASHVILLE, Tenn. – Kentucky coach John Calipari insisted he worked harder in the second half, even though his Wildcats led by 30 at halftime and P.J. Washington already had a double-double.

As good as Washington and the Wildcats look now, Calipari believes much more is possible this season if they keep improving.

“I teased them at halftime, told them I was really mad at them because I don’t want any of my teams playing this well in January,” Calipari said.

Washington had 18 points and 10 rebounds to go along with two steals and two assists by halftime, and he posted his career-best third straight game with at least 20 points.

“I waited a year and half for him to play this way,” Calipari said. “I’m not letting him slip back.”

Kentucky (17-3, 6-1 Southeastern Conference) also won its sixth consecutive in this series with Calipari perfect so far against Vanderbilt coach Bryce Drew, who sees Washington as possibly the most improved player in the country.

The Tuesday victory was UK’s largest road win of the John Calipari era. The previous mark was 34 at South Carolina in 2012.


“All compliments to him for turning his game completely around from last year to this year,” Drew said.

The Wildcats came to Memorial Gym after their toughest stretch since the 2015 NCAA Tournament and the end of the 2005-06 regular season, during which they beat three straight ranked opponents, capped by a win over Kansas last weekend. They kicked off a two-game road swing through the SEC in dominating fashion.

Vanderbilt pulled within 12-10 on a 3-pointer by Aaron Nesmith with 13:50 left, and then Kentucky finished the half by outscoring the Commodores 33-5 for a 45-15 halftime lead. The Commodores barely outscored their 14 turnovers, which Kentucky turned into 16 points.

The Wildcats also smothered Vanderbilt in the paint, and the Commodores couldn’t knock down anything from outside either.

“When they’re shooting the ball that well with their inside presence again, they’re going to be really tough to beat by anyone in the country,” Drew said.

Saben Lee led the Commodores with 15 points, Matt Ryan had 12 and Nesmith scored 11. Freshman Simisola Shittu had his first scoreless game, missing all five of his shots.

The Wildcats didn’t ease up in the second half, knocking down their first three shots from beyond the arc. Keldon Johnson connected 15 seconds into the half for Kentucky’s biggest lead of the game at 48-15. Kentucky led by as much as 38 just past the midway point of the half.

The biggest question was whether Vanderbilt could match the 47 points it scored in a loss at Rupp Arena on Jan. 12, and it did that when Ryan knocked down a 3 with 1:08 left. Kentucky answered with a couple big dunks to its fans’ delight.

Kentucky: The Wildcats have held five of their past six opponents below 64 points and to 40 percent or less shooting. They also have held Vanderbilt to its two lowest-scoring games this season.

Vanderbilt: Drew has been hoping that his Commodores would settle into new roles after losing freshman point guard Darius Garland, who withdrew from school after a season-ending knee injury to prepare for the NBA draft. Instead, the Commodores lost to their third ranked opponent in four games, looking nothing like the team that took top-ranked Tennessee to overtime six nights ago.