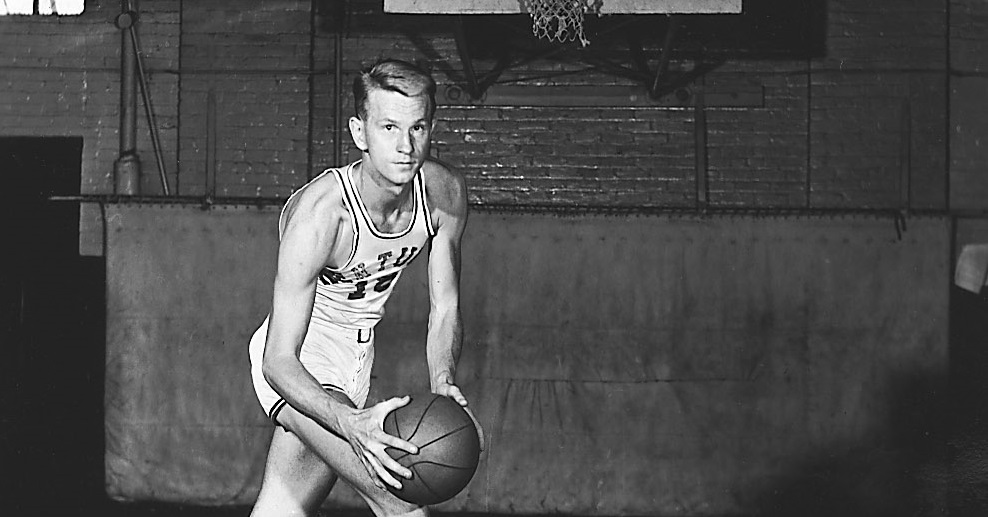 A native of Antioch, Illinois, Barnstable scored 635 points in his career and appeared in 129 games. He was the sixth man on Kentucky’s “Fabulous Five” team in 1948 and moved into the starting lineup for the 1949 championship.

Barnstable was an alternate on the 1948 Olympic gold-medal team coached by Rupp. He was an All-SEC Third Team selection by the Associated Press in 1949 and also played on the golf and track and field teams at Kentucky.

Prior to UK, Barnstable served three years in World War II. According to Barbara Edelman, one of Barnstable’s three daughters, he was drafted at 18 years old out of high school and was a part of the 71st Infantry Division that walked across Europe and ended up in Austria, the furthest east of any infantry in the European campaign. Barnstable and his infantry helped liberate a concentration camp in Europe.

Barnstable’s time in the army actually served as his bridge to Kentucky basketball. After the war was over, Barnstable stayed in in Europe as part of a stabilization effort and ended up on an all-star basketball team. Playing across Europe, he connected with Milt Ticco, a former Kentucky men’s basketball player (1941-43), and a successful banker in Lexington who encouraged him to try out for UK when he returned to the U.S.

According to Edelman, an “audition” was set up for Barnstable in front of Rupp. Upon seeing the 6-foot-3 Barnstable duck in a small doorway at Alumni Gym, Rupp asked how tall he was and then to see his hands. That was all Rupp needed to see.

Rupp said to him, “I think you’ve got what it takes. You’ve come highly recommended so I’m going to offer you a scholarship.”

Barnstable was selected in the seventh round of the 1950 NBA Draft by the Boston Celtics but did not play in the NBA. After his basketball career, he coached basketball at DuPont Manual High School in Louisville, Kentucky, and later became a salesman. He was an avid golfer and twice (1985 and 1994) won the Kentucky Golf Association Senior Match Play Championship. He qualified to play in the Senior British Open as an amateur.

There will be a visitation at Maxwell Presbyterian Church (180 E Maxwell St, Lexington, KY 40508) on Sunday at 2 p.m. with a short service to follow at 3:30 p.m. The public is invited.