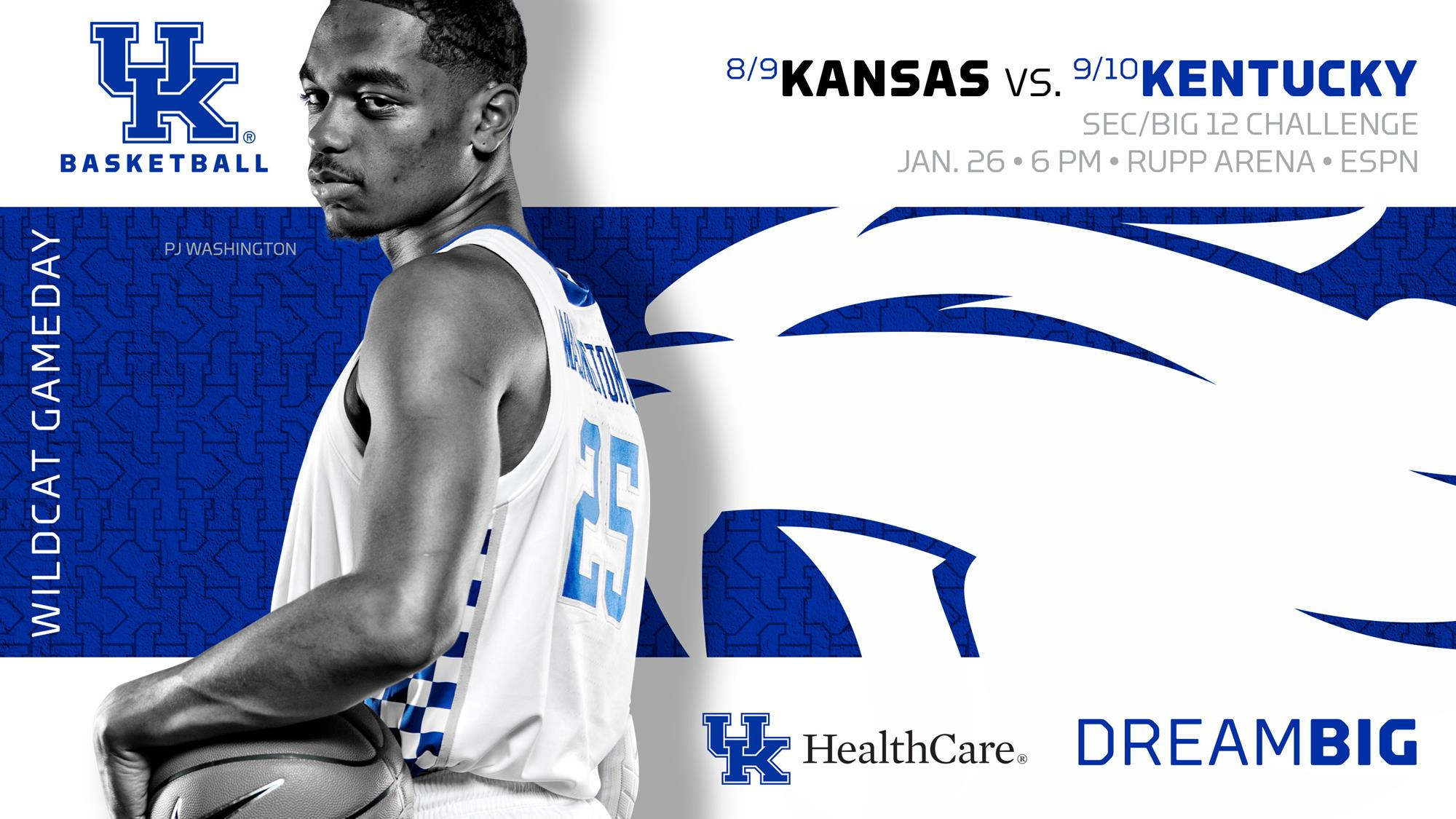 The hype is going to be something else.

After all, the two winningest programs in college basketball history don’t face off every day.

To John Calipari – ever focused on preparing his team for the games that really count – there’s only one big draw.

“Because this is a team you’ll be playing if you’re lucky enough to get into the tournament and advance,” Coach Cal said. “At some point you’re play a team like this so let’s see how good we are.”

Kentucky-Kansas does feel like the kind of game you would see in late March or early April – it was the 2012 national championship game, after all – but this edition won’t be played on a neutral court in the Elite Eight or Final Four. Instead, Rupp Arena will host its first top-10 matchup in two years Saturday at 6 p.m. when the No. 8/9 Wildcats (15-3, 5-1 Southeastern Conference) host the No. 9/10 Jayhawks (16-3, 5-2 Big 12) as part of the SEC/Big 12 Challenge.

“This is one where we’ll learn about each other,” Calipari said. “Who’s amped up. Who’s calmed down. This is the kind of game you do that. So, we’ll see. They’re going to come in—they’re terrific.”


Kansas was preseason No. 1 in both polls and has been impressive in facing the nation’s toughest schedule according to the NET and kenpom.com. No one in the country has more Quadrant 1 wins than the Jayhawks, who are 9-2 in such games, even though junior big man Udoka Azubuike played in only nine games before being lost for the season.

Dedric Lawson, on the other hand, is very much playing. The 6-foot-9 junior is a shoo-in for All-America honors in his first season at Kansas after transferring from Memphis, averaging a team-best 19.5 points and 10.9 rebounds.

“Lawson is as good as we’re going to play against,” Calipari said.

Lawson is coming off a game against Iowa State in which he guided the Jayhawks to a comeback from a six-point second-half deficit with 29 points and 15 rebounds. Someone with the ability to put up those kinds of numbers can’t be the responsibility of just one person.

“He’s a good player,” Reid Travis said. “It’s going to be by committee. Everyone that’s in there that goes against them has got to stay active. I think the biggest thing is, every time you’re guarding him, just stay active, try to limit his touches, try to limit his low-post scores, things like that. That will help us be effective.”

UK might never have faced a player exactly like Lawson, but the Cats are well versed in big games by this point. A season-opening loss to Duke hasn’t completely faded from memory, but wins over North Carolina at a neutral site and Louisville and Auburn on the road have served notice that UK is now ready for the spotlight.

The same concept applies to UK’s season as a whole. There have been hiccups – mostly recently a loss at Alabama that threatened to undo the progress the Cats made against U of L and UNC – but the Cats have, to borrow Johnson’s phrase, weathered the storm.

“Coach has done a great job, even if we lost a game, we still have the right mindset,” Travis said. “OK, we’ve got to go back, watch film and get better. That’s kind of been our mindset that has helped us get on this winning streak. For us, obviously, it’s a big game, we want to win this game a lot, but also just looking at, what are the little things that have helped us throughout the season and stay true to what we’ve been doing all year.”

Saturday isn’t about a battle of the bluebloods or ESPN College GameDay being in town for the Cats. It’s about this team taking another step toward what it can become.

“I think we’re just going out there giving it our all,” Johnson said. “Regardless of the outcome, we’re going to learn something from it. I think the main thing, we’re just playing for each other out there. We won some big games and don’t want to say we feel like we’re trying to prove something. We feel like we’re just trying to be the best team we can be.”

Washington, Defense Lead No. 8/9 Kentucky Past No. 22 Mississippi State

Kentucky’s defense wasn’t perfect against Mississippi State, just quick enough to disrupt the No. 22/22 Bulldogs’ rhythm and cause its worst offensive performance this season.

The No. 8/9 Wildcats now aim to keep it going after clearing the second of three big challenges.

PJ Washington scored 21 points, including a big 3-pointer down the stretch, Tyler Herro added 18, and Kentucky pulled away from Mississippi State 76-55 on Tuesday night for its fifth consecutive victory.

The Wildcats (15-3, 5-1 Southeastern Conference) also emerged with a lot to like in beating their second of three ranked opponents before hosting No. 9/10 Kansas on Saturday.

They led for all but the early minutes, but had to survive some rough stretches that allowed the Bulldogs (14-4, 2-3 SEC) to get within 41-39 with 13:39 remaining. Kentucky answered with scoring 18 of the next 25 points over the next 6:50, helped by Herro’s three free throws and consecutive 3s by Immanuel Quickley and Washington for a double-digit advantage it maintained.

Defense helped as Kentucky held the Bulldogs to season lows in points and shooting percentage (31.1 percent) behind timely plays that swung the game. The biggest was EJ Montgomery’s out-of-nowhere swat of Quinndary Weatherspoon’s layup attempt, leading to Nick Richards’ dunk that snuffed MSU’s last chance to close the gap. His block was among eight by the Wildcats.

“It was pretty important,” Herro said of the play. “EJ made a big block that kind of helped us and sparked us and we kind of took off from there.”

Kentucky on the other hand shot 44 percent and 8 of 16 from long range. Washington was 9 of 15 from the field with three 3s for his first 20-point game in more than a month. He also grabbed six rebounds and matched a season high with four blocks.

“I felt like I was just hitting shots tonight,” Washington said. “They was just falling. I could’ve done a lot more on the defensive end and rebound more. There’s always room for improvement.”

Herro made all three from long range and all five free throws to follow his 20-point performance at Auburn. Reid Travis grabbed 12 rebounds and Ashton Hagans had a career-high nine assists as the Wildcats won the glass 43-36 and won the second of three consecutive top-25 matchups.

Kentucky also succeeded in holding MSU’s potent perimeter game to just 3 of 20 from behind the arc after entering the contest second in the SEC at 38 percent.

Quinndary Weatherspoon had 19 points and Tyson Carter 11 for the Bulldogs.

• Mississippi State totaled a season-low 55 points. UK is 68-0 under Coach John Calipari when keeping the opponent at 55 points or less, Including 4-0 this season
• Mississippi State shot only 31.1 percent from the field. UK is 171-15 (.918) under Calipari when keeping the opponent at 40 percent or less, including 7-0 this season
• Kentucky is 3-1 vs. Associated Press Top 25 teams this season, including consecutive victories over Auburn and Mississippi State. UK will have a chance for wins vs. ranked opponents in three consecutive games when the Wildcats play host to No. 9/10 Kansas on Saturday. This was the first time UK had defeated AP Top 25 opponents in consecutive games (with no game in between) since the 2015 NCAA Midwest Regional
• UK’s 21-point margin of victory is the most vs a ranked opponent since dispatching No. 13 Michigan State, 69-48, on Nov. 15, 2016
• Kentucky improved to 248-5 (.980) under Calipari when leading by at least 10 points at any point in the game
• UK has won 14 in a row at Rupp Arena, including 11-0 this season
• Washington’s 21 points were his most since scoring a career-high 29 vs. Seton Hall
• With Hagans’ career-high nine assists, he now has three or more in each of UK’s last 12 games
• Travis hauled in double-digit rebounds for the fifth time this season
• Richards scored eight points in just 10 minutes and also added six boards and a block
• Calipari improved to 13-0 against Mississippi State
• UK’s 12-game winning streak against the Bulldogs is its third-longest in the series and the longest since winning 17 straight from Feb. 18, 1967 to March 8, 1975

It will mark the Jayhawks second trip to Rupp Arena for the SEC/Big 12 Challenge after also coming in 2017. Kentucky owns an all-time record of 22-9 against Kansas, including a 7-2 mark when the game is played in Lexington. However, the Jayhawks are on a three-game winning streak in the series and have won six of the last nine meetings.

Kentucky and Kansas have meet every season since the 2014-15 season either as a part of the SEC/Big 12 Challenge or the Champions Classic. UK’s last win over the Jayhawks was the memorable 72-40 win in Indianapolis in the third game of the historic 2014-15 season that saw the Cats win their first 38 games.

The 2019 slate of SEC/Big 12 Challenge games will mark the sixth season of the annual event between the Southeastern Conference and the Big 12 and the fourth straight season where all 10 games of the challenge will be played on the same day. A bye in the league schedule for participating teams was created to accommodate for the format. UK is 2-3 in the challenge.

Kansas opened the 2018-19 season as the No. 1 ranked team in the country and boasts wins over Michigan State, Tennessee, Marquette and Villanova. They Jayhawks are 16-3 overall and are ranked No. 9/10 in this week’s polls.

Led by Dedric Lawson (19.5 points per game) offensively, it’s their defense that has been the key to their success. Kansas is ranked No. 9 in defensive efficiency, according to KenPom.com (through games played on Jan. 22), and it is limiting opponents to 70.2 points per game. Ten of the Jayhawks’ 19 opponents have not scored at least 70 points in a game this season.

Kansas averages 7.4 steals per game with four different players generating at least 22 on the season.

Back on ESPN College GameDay

With the Kansas-Kentucky game as its backdrop, ESPN College GameDay will be in Rupp Arena for Saturday’s game.

The ESPN College GameDay crew of Rece Davis, Jay Bilas, Jay Williams and Seth Greenberg will air its popular game-day show on ESPN starting at 11 a.m. inside Rupp Arena. The GameDay crew will preview the Kansas-UK game, which will tip at 6 p.m. on ESPN. Bilas, Dan Shulman, Maria Taylor and Holly Rowe will be on the call for the game.

This will be UK’s 17th ESPN College GameDay appearance overall, behind only North Carolina (18), and the eighth trip to Lexington, Kentucky, tied for second overall. It’s the 10th straight season Kentucky is making an appearance on the show.

With a 6-10 record in College GameDay appearances, the Wildcats will look to make it two wins in a row with GameDay as the backdrop. Although the Wildcats lost their home appearance with the popular ESPN show in town last January, the Wildcats’ most memorable victory of the season in 2017-18 was the 17-point comeback at West Virginia under the spotlight of GameDay.The Kentucky-Kansas matchup will headline the annual SEC/Big 12 Challenge, the sixth season of the event between the Southeastern Conference and the Big 12 and the fourth straight where all 10 games of the challenge will be played on the same day.

It will be the second time in three seasons UK has hosted the Jayhawks in the annual league challenge. The Jayhawks visited Rupp Arena in 2017 for the first time since 2005. Kansas won the matchup, 79-73, with GameDay in town.

This will mark the third matchup between the two schools on ESPN College GameDay.