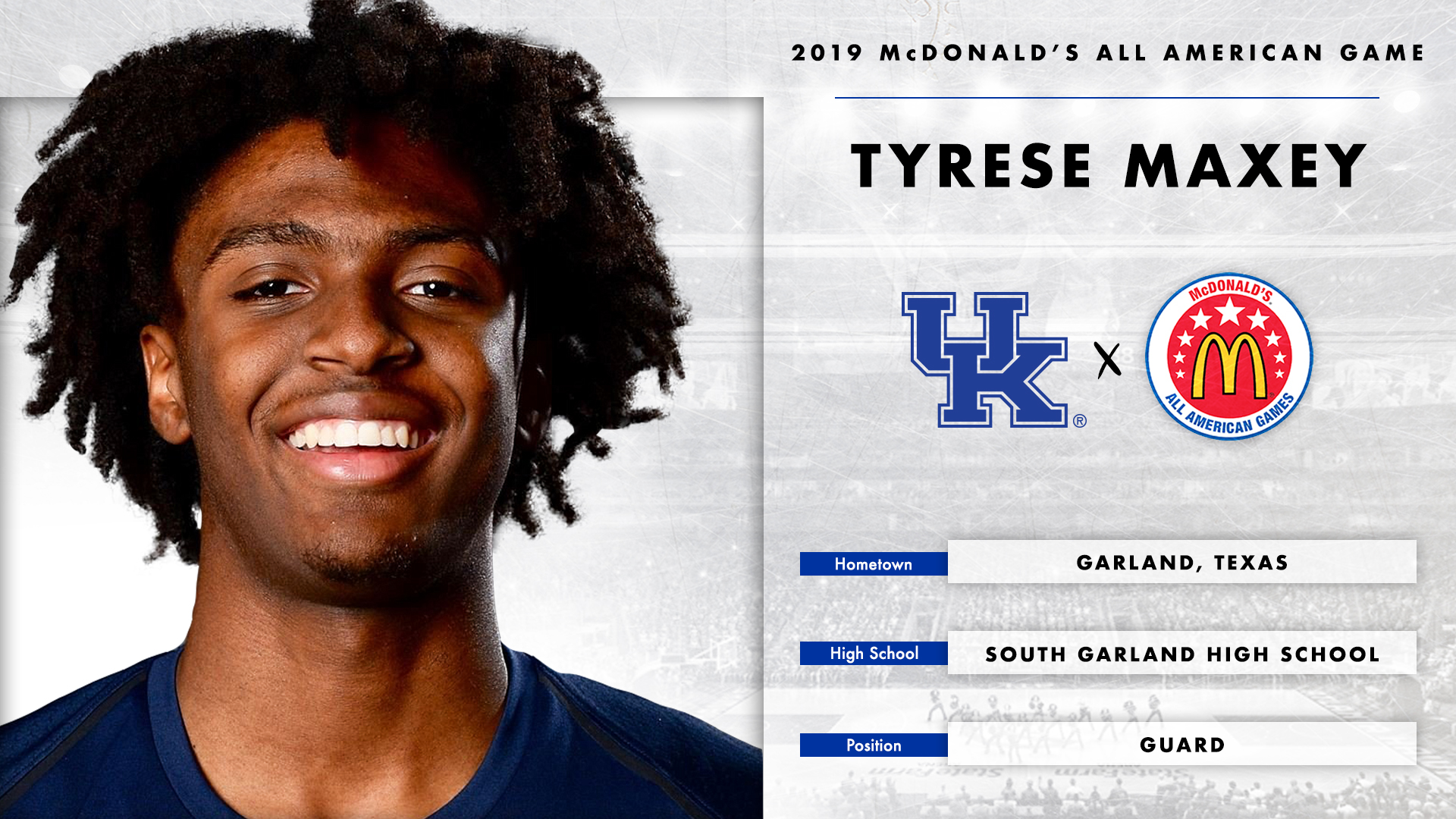 LEXINGTON, Ky. – Kentucky men’s basketball fall signee Tyrese Maxey will continue the long-standing tradition of representing the Wildcats during the annual McDonald’s All American Game after being one of 24 players selected for the 2019 edition of the game set for March 27 in Atlanta.

Joining an elite list that features some of the greatest players to play for Kentucky, Maxey will suit up for the west team in the 42nd edition of the game. Tipoff is set for 7 p.m. ET and it will air live on ESPN2.

With Maxey’s selection, UK has signed 34 players during the John Calipari era who have been named to the prestigious high school event, more than any other school in the country during that time period. Kentucky can only publicize recruits who have signed letters of intent with the University of Kentucky. Multiple players from each of Calipari’s signing classes have been tabbed McDonald’s All Americans, including five each in 2013 and 2017.

Maxey, a combo guard out of Garland, Texas, is a gifted scorer. Through 27 games of his senior season, he’s logging 22.0 points per game, 6.2 boards, 3.4 assists and 1.7 steals per game. He averaged 22.5 points, 7.0 rebounds and 3.1 assists per game as a junior at South Garland High School en route to a state semifinals appearance. He was one of the leading scorers on the Nike summer circuit this past season.

At 6-foot-4, 185 pounds, he can play either point guard or off the ball because of his ability to put the ball in the basket. He projects as a lead guard on the college level. He is ranked as the No. 11 overall player by ESPN and No. 10 by both Rivals and 247Sports. Perhaps his crowning prep achievement to this point was leading USA Basketball to a gold medal at the 2018 FIBA Americas Championship. With Maxey’s contributions, Team USA posted a 6-0 record in St. Catharines, Canada. He averaged 8.8 points and 2.0 rebounds during the run.

UK’s current signing haul, which also includes in-state prospect Dontaie Allen, who was routinely recording games of 40 and 50 points before injury his knee this winter, is setting up to be another highly-regarded class. In every season in the Calipari era, the Wildcats have signed a top-three recruiting class according to the Recruiting Services Consensus Index, which tallies major recruiting rankings and plugs them into a formula to calculate a consensus ranking.

Kentucky has signed 66 McDonald’s All Americans since the team began in 1977, including current Wildcats Keldon Johnson (2018), EJ Montgomery (2018), Immanuel Quickley (2018), Nick Richards (2017) and PJ Washington (2017). Graduate transfer Reid Travis was also a McDonald’s All American in 2014, although he did not sign with UK out of high school.

The current Wildcats return to action on Saturday when they take on No. 9/10 Kansas in the SEC/Big 12 Challenge. Tip is set for 6 p.m. and it will air live on ESPN.