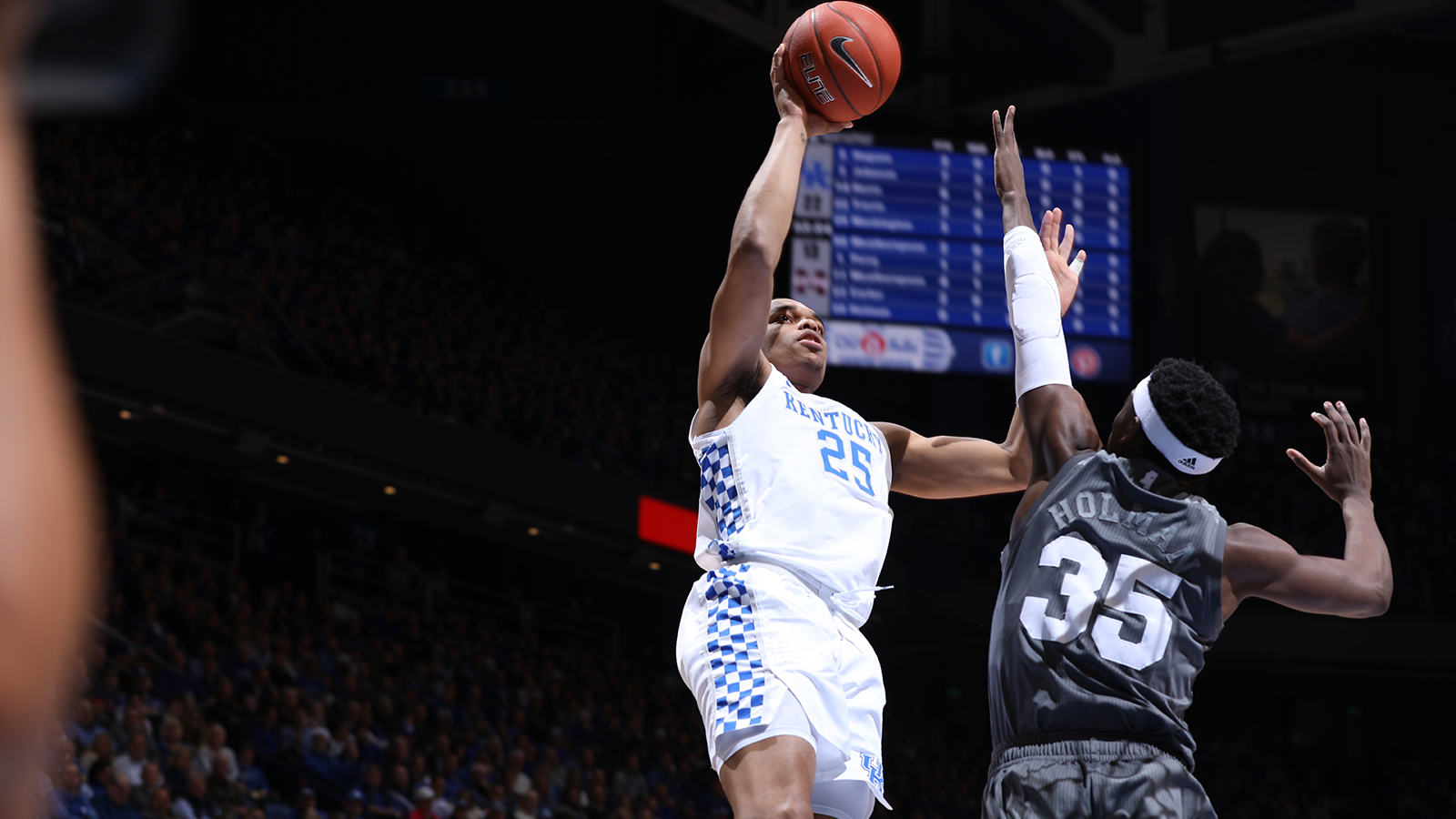 LEXINGTON, Ky. – Kentucky’s defense wasn’t perfect against Mississippi State, just quick enough to disrupt the No. 22 Bulldogs’ rhythm and cause its worst offensive performance this season.

The No. 8 Wildcats now aim to keep it going after clearing the second of three big challenges.

PJ Washington scored 21 points, including a big 3-pointer down the stretch, Tyler Herro added 18 and Kentucky pulled away from Mississippi State 76-55 on Tuesday night for its fifth consecutive victory.

The Wildcats (15-3, 5-1 Southeastern Conference) also emerged with a lot to like in beating their second of three ranked opponents before hosting No. 9 Kansas on Saturday.

They led for all but the early minutes, but had to survive some rough stretches that allowed the Bulldogs (14-4, 2-3) to get within 41-39 with 13:39 remaining. Kentucky answered with scoring 18 of the next 25 points over the next 6:50, helped by Herro’s three free throws and consecutive 3s by Immanuel Quickley and Washington, for a double-digit advantage it maintained.

Defense helped as Kentucky held the Bulldogs (14-4, 2-3) to season lows in points and shooting (31 percent) behind timely plays that swung the game. The biggest was EJ Montgomery’s out-of-nowhere swat of Quinndary Weatherspoon’s layup attempt, leading to Nick Richard’s dunk that snuffed MSU’s last chance to close the gap. His block was among eight by the Wildcats.

“It was pretty important,” Herro said of the play. “EJ made a big block that kind of helped us and sparked us and we kind of took off from there.”

How we got to 15-3 tonight. pic.twitter.com/bRPgQ1bBnj


Kentucky on the other hand shot 44 percent but 8 of 16 from long range.

Washington was 9 of 15 from the field with three 3s for his first 20-point game in over a month. He also grabbed six rebounds and matched a season high with four blocks.

“I felt like I was just hitting shots tonight,” Washington said. “They was just falling. I could’ve done a lot more on the defensive end and rebound more. There’s always room for improvement.”

Herro made all three from long range and all five free throws to follow his 20-point performance at Auburn. Reid Travis grabbed 12 rebounds and Ashton Hagans a career-high nine assists as the Wildcats won the glass 43-36 and won the second of three consecutive Top-25 matchups.

Kentucky also succeeded in holding MSU’s potent perimeter game to just 3 of 20 from behind the arc after entering the contest second in the SEC at 38 percent.

Quinndary Weatherspoon had 19 points and Tyson Carter 11 for the Bulldogs, who made just 19 of 61 from the field (31 percent) in their first game against a ranked foe this season.

“We were rushed offensively tonight,” Bulldogs coach Ben Howland said. “I think they did a good job of speeding us up and getting us playing faster and not really controlled enough offensively.”

The Wildcats should remain in the Top 10 after clearing the first of two ranked opponents this week. The Bulldogs will need to beat Auburn on Saturday to remain ranked.

Mississippi State: The Bulldogs brought in balanced offense but struggled despite a bunch of opportunities, especially from long range. Forward and Kentucky native Aric Holman missed his only two attempts in 20 minutes. MSU also committed 15 turnovers leading to 17 Kentucky points.

“Sometimes you have those nights you’re struggling from 3-point range,” freshman guard Robert Woodard said. “We were struggling all over tonight. We just have to get back in the gym and make things work.”

Kentucky: The Wildcats offset strong stretches with sloppy moments that allowed MSU to get close. But they slowly regrouped to close with a flourish and remain a game within the unbeaten leaders in the SEC.

Mississippi State hosts No. 16 Auburn in SEC play on Saturday.

Kentucky hosts No. 9 Kansas on Saturday in the SEC/Big 12 Challenge.