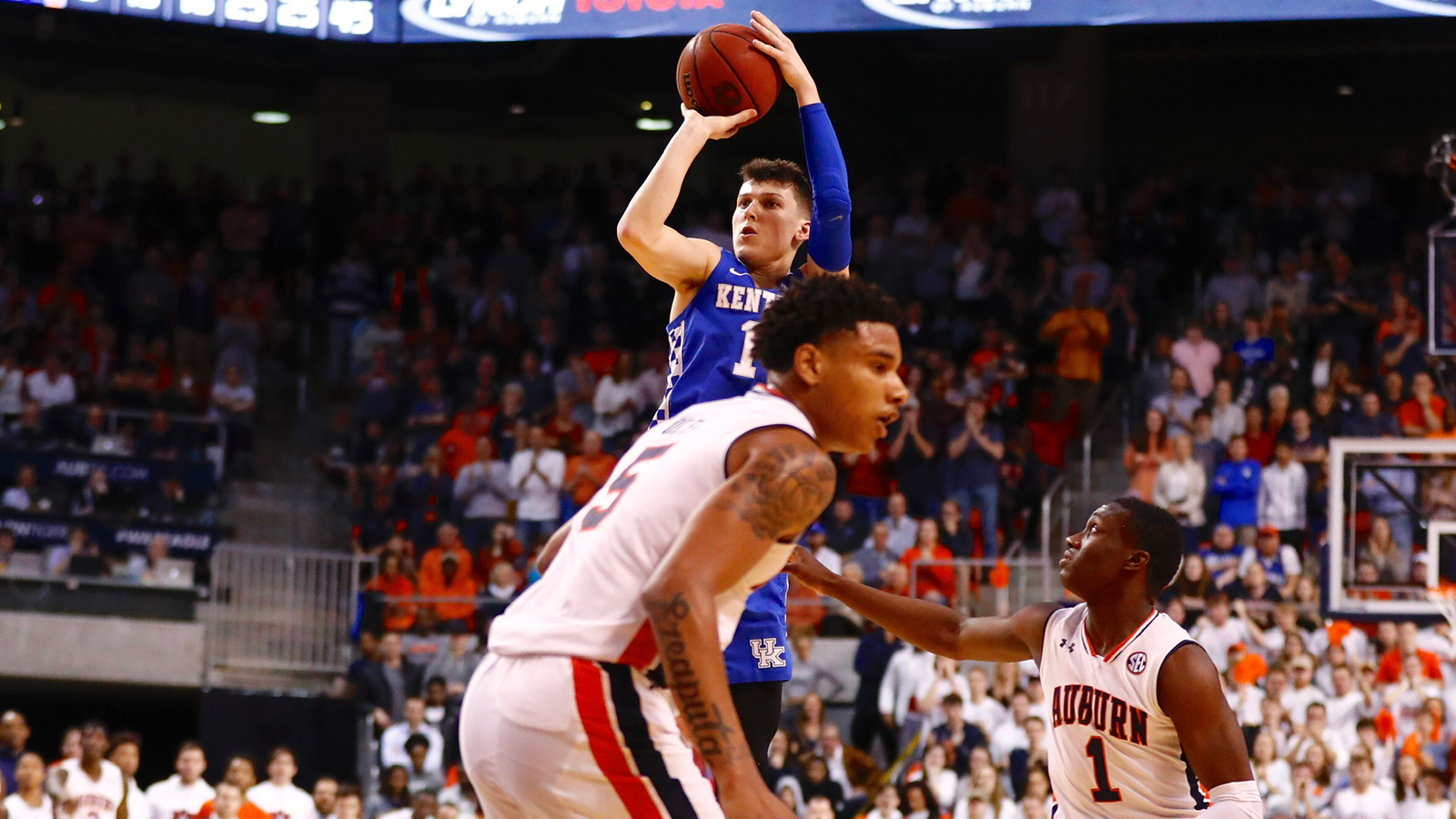 AUBURN, Ala. – Tyler Herro and the Kentucky Wildcats didn’t flinch when their seemingly comfortable lead was wiped out.

Faced with a hostile crowd and No. 14 Auburn’s red-hot Bryce Brown, the 12th-ranked Wildcats survived a big comeback attempt in an 82-80 win on Saturday.

Herro scored 10 points in the final 5:23 and made two free throws with 24 seconds left, then Immanuel Quickley added another.

“This is so hard for these kids,” Kentucky coach John Calipari said. “What I’m proud of is we’re playing a veteran team that’s been through wars, that has been through games like this, that made shots.

“They were down 17 and they never stopped. And guess what? Neither did we.”

It made for a dramatic finish for two teams who meet again Feb. 23 in Lexington.

The Wildcats (14-3, 4-1 Southeastern Conference) rebounded after losing a 17-point second-half lead to finish off a showdown between two of the league’s top teams.

Auburn (13-4, 2-2) took an 80-79 lead on Jared Harper’s contested 3-pointer over Ashton Hagans with 32 seconds left. Herro grabbed the lead back from the line, then Harper held onto the ball for what he hoped would be a game-winner.

The Tigers’ 6-foot point guard drove and launched a shot that hit the backboard and bounced off the rim a couple of times but rattled out.

“I knew when I was able to get by him, that I had the angle,” Harper said. “I feel like when I shot it, I put it in the right place on the backboard and it just didn’t go in.”

And the Wildcats breathed a sigh of relief.

“We’re lucky to get out of here alive,” Calipari said. “We’re lucky he missed that little shot.”

Quickley grabbed the rebound and was fouled. He made the first of two free throws with 3 seconds left and Samir Doughty’s long 3-point heave missed at the buzzer.

Herro and Keldon Johnson both scored 20 points for the Wildcats.

Brown had three points and three turnovers in the first half.

“We just tried to chip away at the lead, little by little, every chance we got and we ended up doing it,” he said.

Auburn announced before the game that Wiley is expected to miss “a couple of weeks” with a lower right leg injury.

Kentucky: Weathered the storm after losing the lead. Freshman point guard Hagans had his string of five straight double-digit games end but still filled the stat sheet. He had six points, seven rebounds and six assists.

Auburn: Heated up after shooting 33 percent in the first half. After that, the Tigers made 8 of 14 3-pointers.

Wiley wore a protective boot on his right leg. The 6-foot-11, 260-pounder is averaging 10.8 points, 6.1 rebounds and 1.9 blocked shots per game. His absence gave the Wildcats an even bigger size advantage.

Fellow post players Anfernee McLemore and Horace Spencer both fouled out in the final minutes.

Calipari says he didn’t plan to call timeout if Auburn’s potential go-ahead shot had gone in.

“We were already set up for what we call `celebration,” said the Wildcats coach, adding he learned that strategy from Larry Brown. “They celebrate, here we come right down your neck.”

Spencer headed to the locker room with the left side of his face bleeding after what was called a flagrant technical foul against Washington with 1:53 left.

Spencer returned with a different jersey — from No. 0 to No. 55 — and a bandage over his left eye to a big ovation from the crowd and a pat on the back from Washington. He promptly made a hook shot.