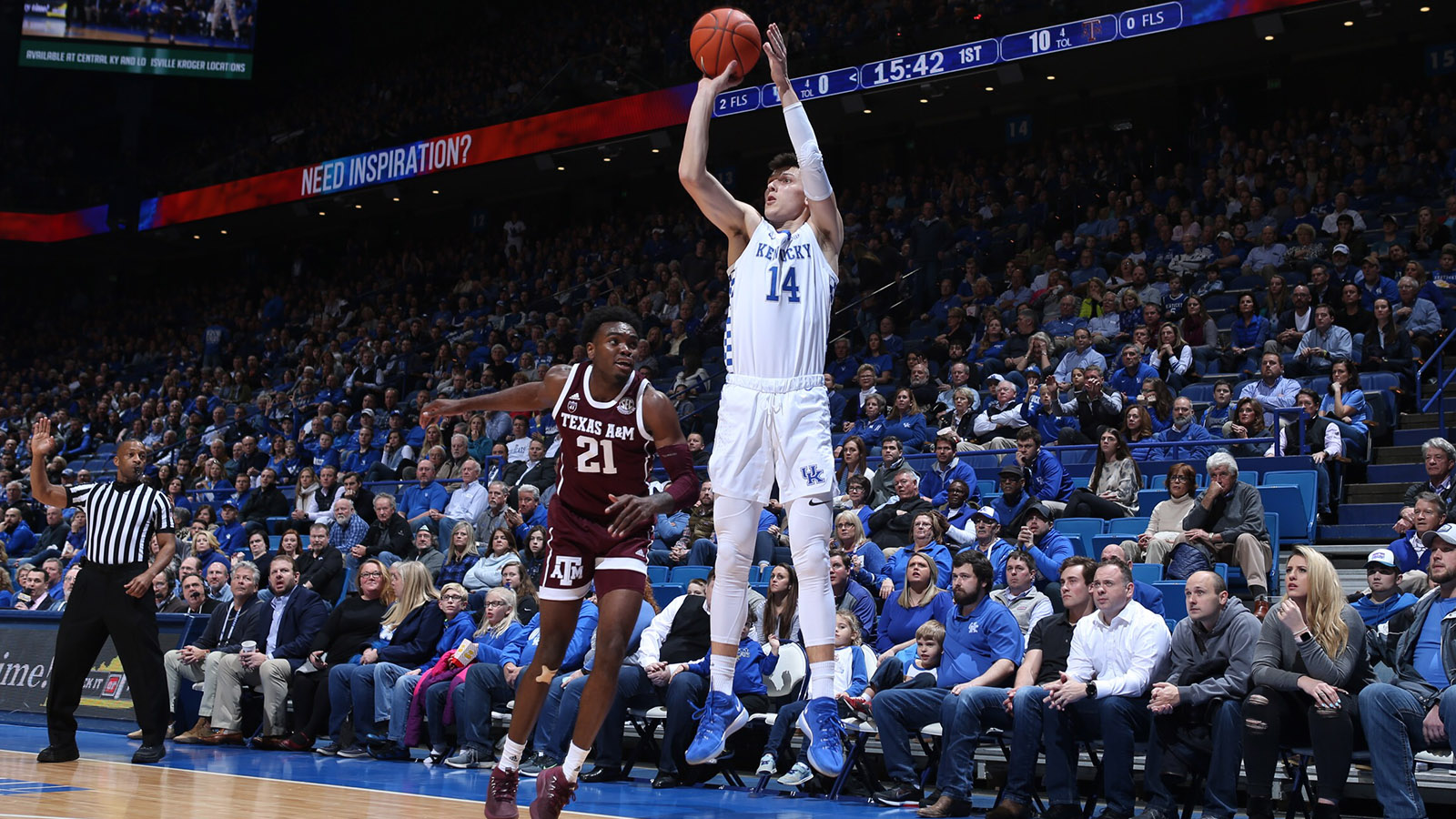 LEXINGTON, Ky. – After an awful start, Kentucky coach John Calipari was happy to see his team finish off Texas A&M.

Tyler Herro had 21 points, Ashton Hagans scored a career-high 18 and No. 18 Kentucky overcame a 10-0 deficit before holding off Texas A&M for an 85-74 victory on Tuesday night.

The Wildcats (11-3, 1-1 Southeastern Conference) definitely had room for improvement after Saturday’s 77-75 loss at Alabama, disappointment that translated into an early hangover against the Aggies.

Kentucky started badly on both ends with four missed shots, turnovers and defensive breakdowns the Aggies seized upon for a pair of 10-point leads. Kentucky quickly regrouped with a 19-6 run over 5:21. Hagans had a pair of steals during the spurt in which everything clicked.

The Wildcats led 46-34 at the break before having to withstand a second-half comeback by the Aggies (6-7, 0-2), who got within 66-64 with 7:55 left. Immanuel Quickley answered with a 3-pointer and PJ Washington eventually followed with a three-point play for an 11-point cushion that held up.

“We started pretty slow and eventually we got it going a little bit,” said Herro, who was 7 of 14 from the field with three from long range for his second 20-point effort in three games.

“Second half, we played a little bit better. Overall, we have to start games quicker and better.”

“The Alabama game was tough,” Quickley said, “but we bounced back. It felt extremely good.”

The Aggies meanwhile were left with another game they played close but came up just short.

Jay Jay Chandler and TJ Starks each had 18 points for Texas A&M, which shot above 50 percent for much of the game. The Aggies cooled off late and finished 48 percent.

Kentucky should remain ranked as long as it follows up against Vanderbilt on Saturday.

A hard foul against Hagans led to a first-half scrum resulting in technical fouls for both teams. Christian Mekowulu and John Walker were whistled for the Aggies, while Washington was called for Kentucky.

Texas A&M: The Aggies stayed close with good shooting and even edged Kentucky 29-28 on the glass. They just didn’t have enough answers down the stretch to overtake the Wildcats and were hurt by 19 turnovers leading to 22 points.

“We started giving the ball away and their defense revved up,” coach Billy Kennedy said. “They tried to speed the game up and I feel like that was in their advantage on the defensive end.”

Kentucky: Shaky as the Wildcats initially looked, they settled down and soon led after 10 minutes. Though outshot much of the night by the Aggies, handling the paint 42-32 and outscoring their bench 23-9 helped them gain the edge and a strong bounce-back from Saturday’s loss against the Crimson Tide. Redshirt freshman guard Jemarl Baker had four critical points along with three assists.

“Jemarl Baker went in and was just playing basketball,” Calipari said. “He wasn’t playing for himself, trying to get his (points). If a guy was open, he threw it to him. It changed the whole complexion of the game.”

Texas A&M visits Alabama on Saturday, seeking its third win in the past five meetings.

Kentucky hosts Vanderbilt on Saturday in search of its fifth consecutive win against the Commodores.