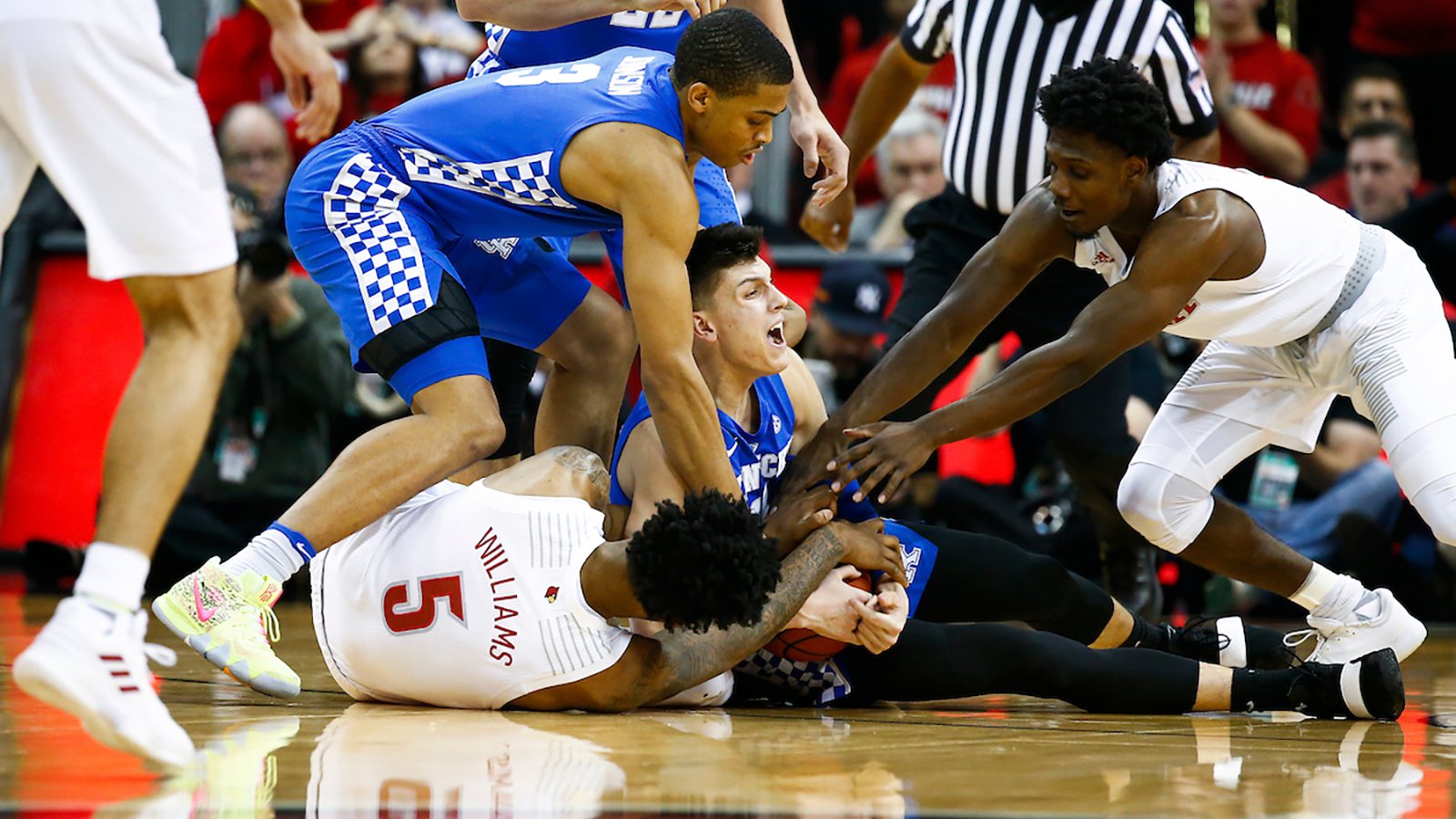 Freshmen Lead No. 16 Cats Past Cards

LOUISVILLE, Ky. – Tyler Herro better get used to being the center of attention after a career performance that also showed how No. 16 Kentucky has progressed since its season-opening blowout loss to Duke.

The freshman guard had a career-high 24 points, Keldon Johnson added 15 and the Wildcats beat Louisville 71-58 on Saturday in this fierce Bluegrass rivalry.

A close game for 10 minutes quickly swung toward the Wildcats (10-2) behind an 11-0 run for a 31-17 lead. The spurt typified their success on both ends. They kept the Cardinals (9-4) from passing and driving inside and grabbed offensive rebounds leading to second and third chances.

Herro thrived the most, making his first three attempts on the way to finishing 10 of 13 from the field with four 3-pointers. That surpassed his previous best of 18 achieved twice, most recently on Dec. 1 against UNC Greensboro.

“I felt like I was in a rhythm since warmups,” said Herro, who has averaged 16.7 points over his past six games. “But I feel like my shot’s going to work all the time.”

Johnson was just 5 of 13 but helped Kentucky keep a double-digit lead for much of the final 30 minutes. The Wildcats won their third in a row overall and 10th of 12 in the Bluegrass rivalry.

Kentucky’s latest victory was more notable, coming a week after it controlled then-No. 9 North Carolina 80-72 in Chicago. Though the most challenging part of the Wildcats’ season begins with next week’s Southeastern Conference opener at Alabama, they appeared to have turned a corner in many phases since the Blue Devils thumped them 118-84 last month.

“At the beginning of this year we were a bad defensive team,” Kentucky coach John Calipari said. “Unwilling passers, `I’m only passing if I don’t have a shot.’ We had guys so focused on themselves they couldn’t play for us.

“You know what, I missed it. I missed it as a coach. After I saw it, (I said) we are going back to these things and get better at this stuff.”

“We started playing and he got by a guy,” the coach added, “Keldon got by a guy, and then we opened up the offense a little bit and played a little different than we’ve been playing. But he (Herro) played well. He also rebounded the ball, ends up with five rebounds.”

Christen Cunningham had a season-high 20 points and Jordan Nwora 17 for Louisville, which shot just 36 percent in having its three-game winning streak stopped. Hoping to win its second game over a ranked school since beating then-No. 9 Michigan State last month, the Cardinals didn’t get closer than 50-41 with 9:39 remaining.

“We were playing down 10 the whole game,” first-year coach Chris Mack said. “We could never get it down where we could put a little bit of game pressure on them. A big part of that is us; a larger part is our opponent.”

Herro was named the game’s Most Valuable Player by the Bluegrass Sports Commission.

Jordan Nwora’s one-handed dunk just before the break required some extension as he reeled in Christen Cunningham’s high outlet pass and slammed it home to get Louisville within 35-27.

Kentucky should rise after its latest impressive win.

Kentucky: Playing their first true road game in perhaps the most hostile environment they’ve faced, the Wildcats played at their tempo and were poised throughout. Besides creating good offensive looks, they edged the Cardinals 34-33 on the boards and forced them into shots they didn’t want. Ashton Hagans had 11 points for the `Cats, who shot 51 percent.

Louisville: The Cardinals showed early promise before being overwhelmed by Kentucky’s size. They were also undone by several sloppy stretches in losing on their home floor for the first time in nine home games.

“It was hard getting in there sometimes,” Nwora said of the Wildcats’ length. “They have great shot blockers. It definitely slowed us down a little bit.”

Kentucky begins defense of its Southeastern Conference championship on Saturday at Alabama.

?When your 6-8 forward dribbles the length of the floor and throws you a perfect lob, you reward him with the @wendys #Instajam of the game. ? @pj_washington ?? @keldonjohnson ?