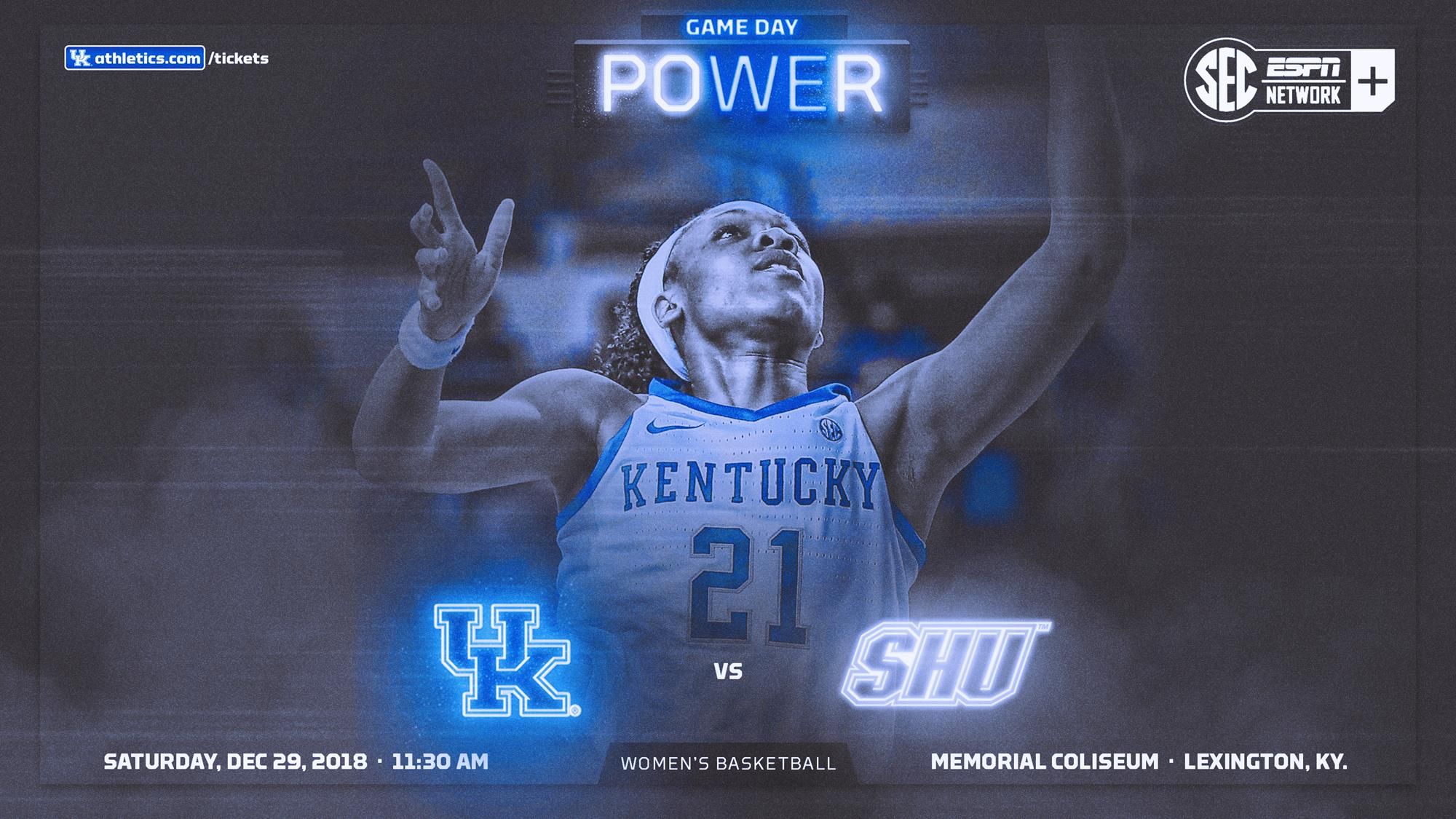 LEXINGTON, Ky. – The No. 18 University of Kentucky women’s basketball team will conclude its non-conference schedule Saturday with an 11:30 a.m. ET tip vs. Sacred Heart inside Memorial Coliseum. The game time was moved up to allow Big Blue Nation to watch the Kentucky men’s basketball game vs. Louisville on the massive new video board inside Memorial Coliseum at 2 p.m. Matthew and Jenna Mitchell will provide free pizza to fans who attend the game and stay and watch the men’s game on the video board.

Single-game tickets are $10 (all ages) in reserved seating areas, while general admission tickets are $8 for adults and $5 for children (ages 6-18) and seniors (age 65+). Young fans are encouraged to take advantage of the Kid Zone pregame with games, poster making stations, coloring stations and more. Ogechi Anyagaligbo is scheduled to sign autographs on the concourse following the game.

The game will be streamed on SEC Network+ with Clay Ables and Christi Thomas on the call. The action can also be seen through WatchESPN on computers, smartphones or tablets. Darren Headrick will have the call on the UK Sports Network on 98.5 FM in Lexington. Live stats and free live audio will be available online at UKathletics.com.

Kentucky (12-1) has shot 50 percent or better from the field in each of its last three games for the first time since November of 2013. The hot stretch started with 56.8 percent against Middle Tennessee before 58.6 percent against Western Carolina and 50.7 against Murray State. The only prior time UK had shot over 50 percent from the field this season was in its second game of the year vs. Southern. The Wildcats have also been red hot from long range during the stretch, hitting 48.2 percent from 3 in the last three games (27-56). UK went 6-of-10 from 3 vs. MTSU before hitting 11 3s against WCU and 10 3s vs. Murray State.

Kentucky has forced 317 turnovers this season averaging 24.4 turnovers forced per game and have scored 358 points off those miscues. The Cats +11.3 turnover margin is first in the nation. UK also ranks second in the nation and first in the SEC with 165 steals.

Sacred Heart enters Saturday’s game with a 4-6 record, including a 1-3 mark at home and 3-3 record in true road games. The Pioneers have wins this season over Siena, New Hampshire, Hofstra and Manhattan. Kentucky is the only SEC team SHU will face this season. SHU is averaging 61.8 points per game this season hitting 38.4 percent from the field and 31.3 percent from long range. The Pioneers have a +3.6 turnover margin this season and -9.4 rebounding margin. Teams are hitting 41.7 percent from the field against SHU in its first 10 games scoring 61.9 points per game.

This is the first all-time meeting between Kentucky and Sacred Heart in women’s basketball. Kentucky holds a 4-0 record all-time against teams that currently make up the Northeast Conference.