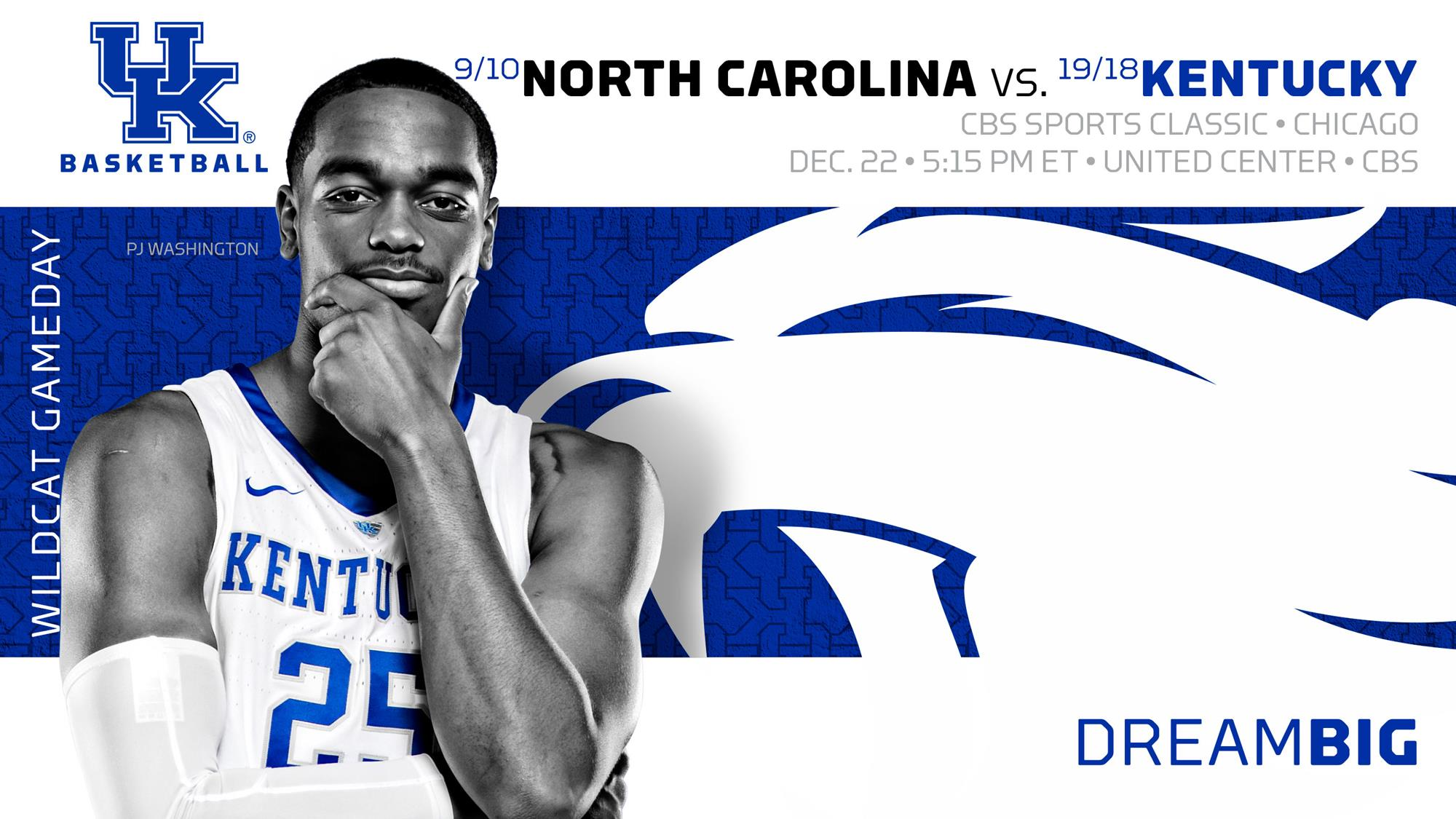 With a matchup against Pac-12 foe Utah looming, Coach Cal was all but bouncing around at Kentucky’s pregame shootaround.

That was partly because Calipari truly does enjoy game day. It is, after all, why he and his players do what they do. It was also, he admits, at least somewhat for effect.

“It’s hard for these kids because the stuff piles up on them a little bit,” Calipari said. “But it’s the life they chose so let’s go, let’s play these games.”

“I’m excited about every game we play because it gives us a chance to see where we are,” Calipari said. “We’re going through practice with one thought: Let’s get better today. And then let’s see where we are. Everything is an experience with this team. You can’t learn about your team against Popcorn State.”

North Carolina certainly is not Popcorn State. In fact, the Tar Heels are fresh off an impressive 103-90 victory over a Gonzaga team that is a couple weeks removed from topping both polls.

Calipari is right about the history between UK and UNC, especially during his 10-year tenure. The Cats and Tar Heels have faced off eight times in that time, with UK winning five. They last met during the 2015-16 season when Malik Monk poured in 47 points in a regular-season UK win before UNC avenged that defeat in the Elite Eight thanks to a game-winning Luke Maye jumper. Maye was an emerging sophomore at the time, but is now averaging a double-double (14.3 points and 10 rebounds) as a senior.

“He can do it in the post and he can do it shooting 3s,” Calipari said. “He’s got a little fade-away, step-away that he’s starting to shoot. But here’s the best thing: He’s a good athlete. Not a great, great athlete. He’s averaging (10) rebounds a game. He just works harder than the other guy. So if you take possessions off, he will rebound on you and get baskets. Whoever is playing him, you cannot take possessions off.”

That won’t be limited to the player guarding Maye. Fellow senior Cameron Johnson (16.4 points per game) leads a balanced attack featuring the talents of a pair of highly regarded freshmen in Coby White and Nassir Little.

“The coaching staff is preparing us big time for this game and as the season goes on,” Ashton Hagans said. “We’ve just got to come along as a team, start talking more, get close together and we’re just going to be better as it goes.”

Improvement is what Calipari and the Cats are pursuing on a day-to-day basis, but some will be using Saturday as an indicator for improvement over a longer term. North Carolina is the toughest test UK has faced since a season opener vs. Duke that the Big Blue Nation would like to forget, though Calipari understands fans haven’t quite been able to manage that yet.

“I think there’s some people in our orbit who have not gotten over that first game yet,” Calipari said. “They haven’t. We all have. I just ask you this question, when we beat Kansas by 50 that year did they ever get over that game? You get over it. You keep playing. You keep going. But, in our orbit that seems to stand out. Well, let me just tell you something: This team we’re playing is going to try and do the same thing to us.”

The stakes will be high as the Tar Heels attempt to do so, but only in a basketball sense. The Cats got a reminder of the bigger picture Wednesday night at an annual Christmas dinner.

“We had Christmas for a bunch of families,” Calipari said. “They sang. They gave our presents. They met with the families. They served them food. They had conversations. They found out things about the families that kind of, you know – it kind of rocks you a little bit. It was a huge day for our players. I always look forward to the day because I want to see how our guys respond.”

They responded well, enjoying the time as much as the families they were serving did.

“It was a great experience going in and feeding families, giving gifts, just giving back,” EJ Montgomery said.

The timing of such an event – in the midst of a challenging on-court stretch – might seem intentional, but that hardly mattered to Calipari. The Cats are trending up as a team, but that’s merely one aspect of their development.

“This is one of those moments as a coach you get to teach more than just what it is in basketball,” Calipari said. “Kids did great academically. There was a lot of good news of what we’re doing. I like the team. We’re getting better.”

Keldon Johnson is finding his stride and getting a feel for making clutch shots.

The freshman guard scored 24 points, including five 3-pointers in the first half, as No. 19/18 Kentucky beat Utah 88-61 on Saturday. Johnson made a career-high six shots from long range on seven attempts as Kentucky made a season-high 12 3-pointers against the Utes.

“I’m not afraid to take a big shot or step up in big moments,” said Johnson, who hit a half-court 3 at the buzzer to send the game into overtime in last week’s loss to Seton Hall. “I’m shooting with confidence. That’s the main thing — my teammates have been just telling me to keep shooting. After I hit the first one, I knew it was going to be a good day.”

Tyler Herro scored 17 points, Reid Travis added 16 and Immanuel Quickley chipped in with 10 for the Wildcats (8-2).

Overall, the Wildcats attempted 21 shots from behind the arc, a number that’s close to Calipari’s target for his squad.

Early on, it was a struggle as the Wildcats trailed 10-2 just five minutes into the game, but Kentucky outscored the Utes 28-9 to push the lead to 30-19. The Wildcats did not trail again.

Johnson highlighted the decisive run with four 3-pointers, including three straight, and finished with 15 points in the opening half.

• Kentucky won the turnover battle 18-6 and the Wildcats capitalized with 34 points off turnovers, winning that stat 34-9
• UK limited Utah to 61 points. UK is 158-7 (.958) under John Calipari when holding the opponent to 63 points or fewer, including 6-0 this season
• Kentucky blocked five shots. UK has rejected at least four opponent shots in every game this season
• UK shot a season-high 58.6 percent from the field. It is UK’s fourth game of the season over 50 percent
• Kentucky hit a season-best 57.1 percent from 3-point range, making a season-high 12 out of 21
• The win marked the 51st consecutive home victory over an unranked Associated Press poll nonconference opponent
• UK is now 231-39 under Calipari against unranked competition
• The Wildcats are now 46-12 under Calipari in “bounce back” games after losses
• Kentucky improved to 241-5 (.980) under Calipari when leading by at least 10 points at any point in the game
• UK has won 11 in a row at Rupp Arena, dating back to last season
• Jemarl Baker Jr. scored his first points as a Wildcat, draining two 3-pointers in two minutes of action
• Johnson recorded his third 20-point game of the year. He’s topped double figures in all but one game this season.
• Ashton Hagans dished out a career-high seven assists

Kentucky and North Carolina, two of the nation’s most decorated programs, have put together some memorable performances in the series’ history over the years. The Tar Heels have the edge in the wins with a 24-15 advantage overall, but Kentucky has won five of the last eight meetings since John Calipari took the reins as head coach, including some very memorable victories.

During Calipari’s tenure, John Wall made a statement to college basketball that Kentucky was back behind 16 points and seven assists in a 68-66 win in 2009. Brandon Knight lifted UK to its first Final Four under Calipari’s direction in the NCAA East Regional Finals with 22 points in 2011. An Anthony Davis swat with under five seconds to play gave the Cats a one-point (73-72) win over the Tar Heels during the 2012 national championship season. The Cats “roared” for injured Alex Poythress who tore his ACL two days before the game in an 84-70 win during the 38-0 season in 2015. Malik Monk hit eight 3-pointers and scored a freshman-record 47 points in a trilling 103-100 win in Las Vegas in the CBS Sports Classic.

The last time the two teams played, in the 2017 South Regional Finals, Luke Maye — still a member of UNC’s team — hit a shot with seconds to spare to lift the Tar Heels to a 75-73. It propelled UNC to the 2017 national championship.

This will mark the 25th time and seventh in a row the teams will meet with both ranked in the Associated Press Top 25.

Kentucky in the CBS Sports Classic

In an event that features the four of college basketball’s most storied programs, Kentucky and North Carolina will meet for the second time in the event’s five-year history. The Tar Heels have the best record in the event at 3-1. Kentucky and UCLA are both 2-2 and Ohio State is 1-3.

The Wildcats and Tar Heels last met in the event in an epic 103-100 affair when freshman Malik Monk scored a freshman-record 47 points to out-dual North Carolina in Las Vegas.

Johnson Named SEC Freshman of the Week for Second Time

For the second time this season, Kentucky freshman guard Keldon Johnson was named the Southeastern Conference Freshman of the Week.

Johnson led the Wildcats with 24 points on 8-of-9 (.889) shooting and drained a career-high six 3-pointers in a dominating 88-61 win over Utah on Saturday. It was his team-high-tying third 20-point game this season. Kentucky’s leading scorer at 16.1 points per game, Johnson has reached double figures in all but one game this season.

The 6-foot-6, 211-pounder from South Hill, Virginia, jumpstarted the Wildcats by nailing his first five 3-point attempts in the opening half. His six 3s were the most for any UK player this season and the most since Wenyen Gabriel hit seven in the SEC Tournament against Alabama on March 10, 2018.

Kentucky has won more weekly SEC honors (91) than any other school during the Calipari era, including 73 SEC Freshman of the Week honors and 18 SEC Player of the Week awards.

The Cats just wrapped up practice in Chicago and Coach Cal is challenging them to become a player-driven team.