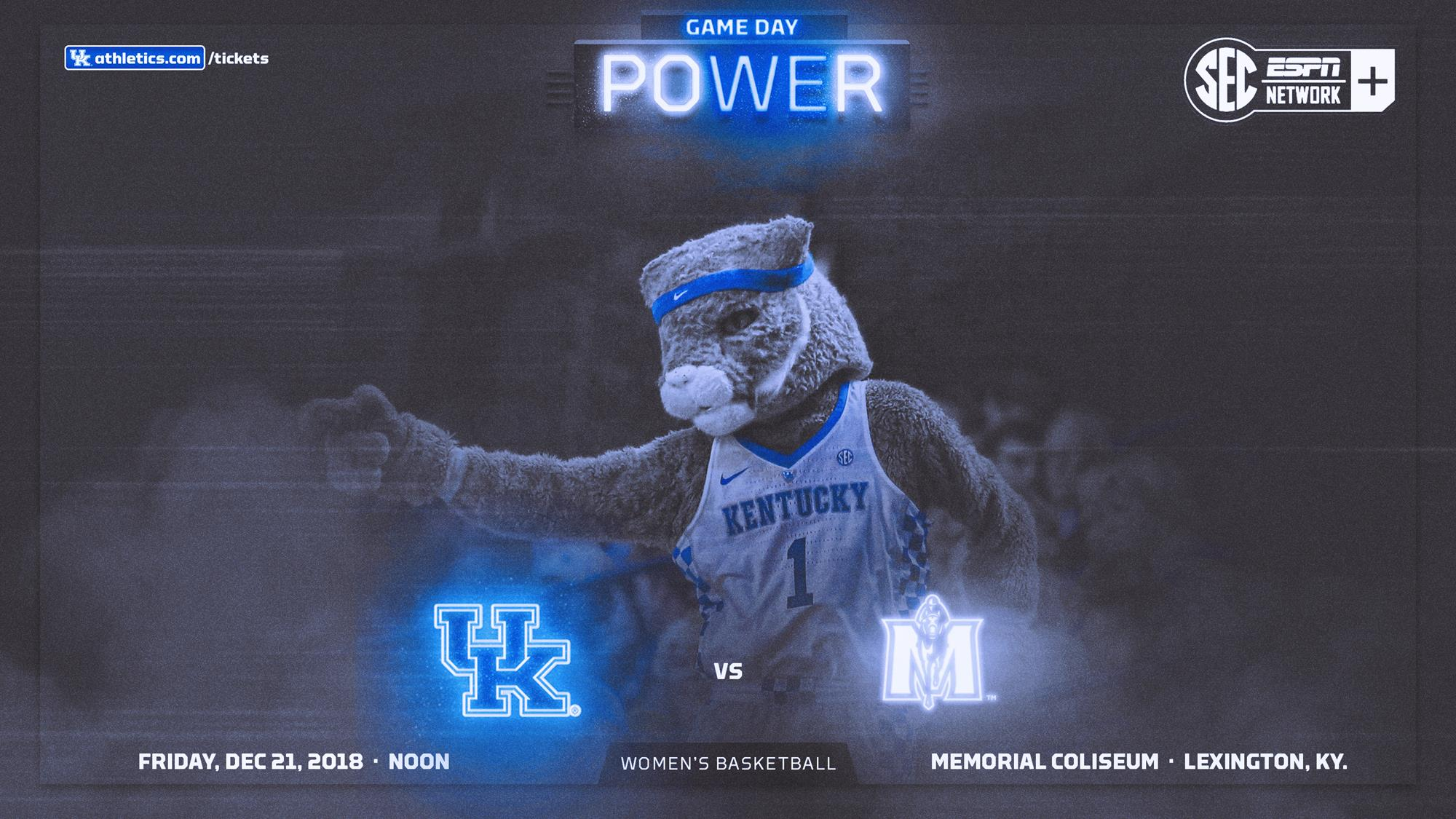 LEXINGTON, Ky. – The No. 18 University of Kentucky women’s basketball team will play host to in-state opponent Murray State on Friday at noon ET inside Memorial Coliseum. Fans are encouraged to come celebrate the holidays with the Wildcats as several holiday themed promotions are planned.

The game will be streamed on SEC Network+ with Jeff Piecoro and Christi Thomas on the call. The action can also be seen through WatchESPN on computers, smartphones or tablets. Darren Headrick will have the call on the UK Sports Network on 630 AM in Lexington. Live stats and free live audio will be available online at UKathletics.com.

All spectators attending the game Friday are encouraged to park in Parking Structure 5 or any E lot surrounding the Joe Craft Center and Memorial Coliseum beginning at 9 a.m. ET. Spectators wishing to park in Parking Structure 5 are encouraged to collect a parking vouchers from event staff at their desired entrance, allowing patrons to exit the structure free of charge. Shuttles are available beginning two hours prior to tip and will pick up and drop off near Parking Structure 5 and the Transit Center Parking Garage and High Street Lot. Shuttles will start back up after halftime to return guests to their parking areas, the shuttle will discontinue service 1-hour postgame.

Doors to Memorial Coliseum open 1.5 hours before tip and UK Athletics encourages women’s basketball fans to arrive early to ease traffic and parking congestion around the Coliseum. For more information on parking around Memorial Coliseum and other game-day questions visit UKathletics.com.

Kentucky (11-1) is ranked No. 18 in both The Associated Press Top 25 and the USA Today/Coaches Top 25. The Wildcats are coming off a dominating win against Western Carolina on Tuesday, taking down the Catamounts 99-39. UK’s 99 points were the most the Wildcats have scored this season. Kentucky shot a season-best 58.6 percent from the field in the game with a season-high 27 assists on 41 made baskets. UK hit 11 3-pointers in the game, which was the second most in a game this season. Freshman guard Rhyne Howard led Kentucky with 18 points and eight rebounds while sophomore forward Tatyana Wyatt had a season-best 16 points with six rebounds. In all, six Wildcats scored in double figures for the first time this season.

Murray State enters Friday’s game with a 4-5 record overall, including an 0-3 mark on the road. The Racers have wins this season over Evansville, Oakland City, Lipscomb and Bethel with losses to Butler, Arkansas State, Alabama A&M, Illinois and SIU. MSU is averaging 74.3 points per game this season while limiting opponents to 65.2 points per game. The Racers are hitting 42.8 percent from the field and 34.0 percent from long range with a +6.8 rebounding margin and +1.3 turnover margin.

Kentucky leads the all-time series in games played against Murray State, 13-0. The two teams did meet five times before UK was a varsity program. UK leads the series 5-0 in Lexington.

Kentucky Head Coach Matthew Mitchell
Opening statement…
“Well, we have a tough game tomorrow in Murray State. They’re a good team. They’re coming in as a greater challenge than we had Tuesday night, just because of how banged up Western Carolina was. Murray is very impressive. Coach (Rechelle) Turner is doing a great job. A really well-coached team. They run some great stuff that will be challenging for us, so we’ll have to be locked in defensively. Again, we are trying to play to our personality of being disruptive on the defensive end and play extremely hard. We’re going to try to push the tempo offensively and see if we can earn a victory. Tough game tomorrow, it’s an early tip at noon. I hope everybody will come out and watch us play, and I know a big crowd can help the energy in building and help us earn a victory. So, tough game tomorrow vs. Murray.”

On how the team will adjust to an early tip…
“Our athletes train early in the morning for a lot of the year. It’s just something that we’ve done in my time here, so they’re used to it. They have a full class load and they’ve got to be up and alert for classes before noon, so we’re not concerned about that at all and I know we’ll be ready to go.”

On what Kentucky will try to improve before SEC play…
“Well, I just think that we’ve worked hard to establish an identity, so now there is no major overhauls we’re trying to make. We’ve tried to establish who we want to be, so now it is a matter of paying attention to the details so we can improve a lot of aspects of the game defensively. As the schedule is a bit more varied in the SEC with the types of teams you might play, we’re going to have to be able to make some adjustments defensively, and so we’ll work hard on that. But, our fundamentals will remain the same – we’d just like to sharpen them up. We have some players that certainly can improve individually as defenders. So, we are working on that leading into conference play. No classes gives us some time to do that. So, we’ll just try to sharpen up and continue to improve in our defense. Our offense has really been aided by some great shooting. We’ve been shooting the ball well, so we’ll just continue to commit to that, and we try to shoot game speed shots a lot during practice and I think that has been very beneficial for us. Really trying to tighten up our offensive packages ahead of conference. This is a good time of the year to work on those things. Today, the focus will be getting ready for Murray State. That’s a team we really respect and it’ll be a tough game tomorrow. So, we’ll focus our attention to them today and makes sure we’re prepared for tomorrow.”

On how hard Jaida (Roper) has worked to make her shot better…
“We’re real proud of Jaida, she has worked really hard. Jaida is such an important part of our team and we need her playing to her full capability. Part of the recipe for her to be at her full strength is she needs to make open 3s because a lot of times, while she creates and can hit some open 3s, she also has teammates that can break the defense down and when she is doing that, it increases the strength of our team. And, another thing I’ll mention about Jaida is she has worked so hard to become an energetic defender. So, often times when we’re trying to teach some of our younger players, she’s really become a veteran leader on the team from that standpoint. We can put the video on and show her effort. A lot of energy in her feet, a lot of tenacity, so her improvement has been a big boost to our team this year and very proud of her improvement.”

On how Blair (Green) has improved over the last six weeks…
“She’s done a good job. You know, she’s been frustrated with her shot. She hasn’t shot the percentage that she’s capable of, but that’s not unusual for a freshman trying to make the transition. She’s been a big part of our team and she’s had some times where she struggles with her confidence at times, and I’ve been real proud of her for taking coaching, listening to coaching and not letting that weigh her down. And, if there has ever been any moments of that, she’s been able to bounce back. The thing that has impressed me early on with the players is their tremendous work ethic, tremendous attitude, if she is down, she is not down very long and that’s an important skill as a college basketball player at this level, to be a factor on a team that has championship aspirations. And, we just want to be excellent at everything we do, there is a lot required of a freshman at that point in transition. So, she’s done a really nice job, we’re grateful that she’s come to practice with the attitude she does every day. She is going to continue to get better, she’s going to have a great career here at Kentucky.”

On how Blair’s parents’ coaching experience impacts her play…
“I’m telling you, it’s a big help. It might not feel like it for Blair sometimes because she might get it from me during the game and then she gets it from her mom and dad after the game. But, they’re great people, they’ve been great supporters of Blair and of our program. I think that a lot of Blair’s strength and attitude, there is no doubt it comes from her parents and her upbringing, to credit her family. Those are the kind of players that we’re looking for, people that want to develop their character and want to strengthen their character while they’re here, and get better as a person. That will translate into the classroom and on the court, and Blair’s a great example of everything we want a Wildcat to be. Merry Christmas everybody.”