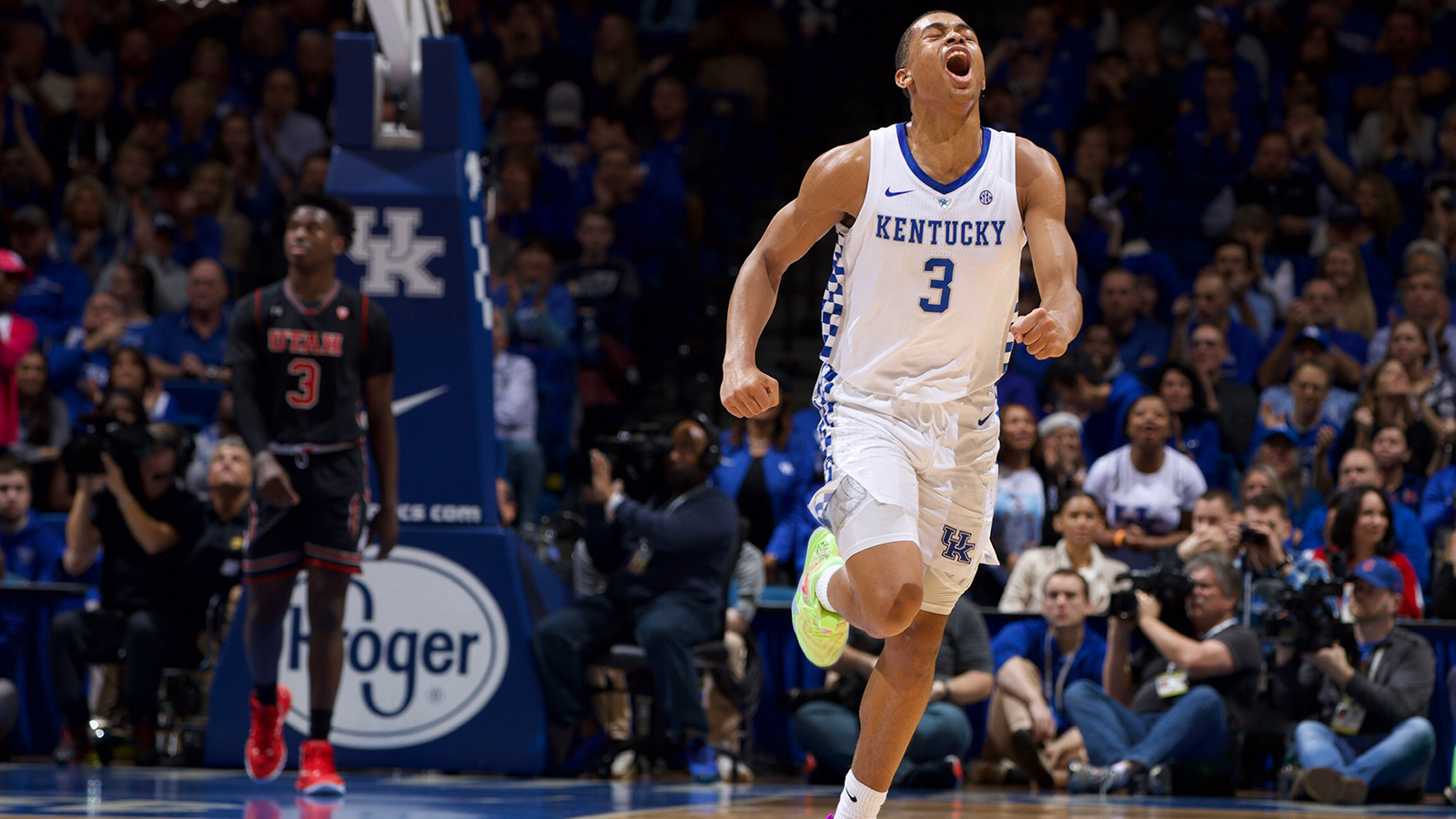 Johnson Leads No. 19 Kentucky Past Utah

by Associated Press
Share
LEXINGTON, Ky. – Keldon Johnson is finding his stride and getting a feel for making clutch shots.

The freshman guard scored 24 points, including five 3-pointers in the first half, and No. 19 Kentucky beat Utah 88-61 Saturday.

Johnson made a career-high six shots from long range on seven attempts as Kentucky made a season-high 12 3-pointers against the Utes.

“I’m not afraid to take a big shot or step up in big moments,” said Johnson, who hit a half-court 3 at the buzzer to send the game into overtime in last week’s loss to Seton Hall. “I’m shooting with confidence. That’s the main thing — my teammates have been just telling me to keep shooting. After I hit the first one, I knew it was going to be a good day.”

Tyler Herro scored 17 points, Reid Travis added 16 and Immanuel Quickley chipped in with 10 for the Wildcats (8-2), who lost their best 3-point shooter when Green decided to transfer nine games into his sophomore season.

Overall, the Wildcats attempted 21 shots from behind the arc, a number that’s close to Calipari’s target for his squad.

Early on, it was a struggle as the Wildcats trailed 10-2 just 5 minutes into the game, but Kentucky outscored the Utes 28-9 to push the lead to 30-19. The Wildcats did not trail again.

Johnson highlighted the decisive run with four 3-pointers, including three straight, and finished with 15 points in the opening half.

Utah: The Utes lost their eighth straight game to the Wildcats. Kentucky defeated Utah 78-69 in the 1998 NCAA title game in San Antonio. The Wildcats beat Utah six times in the 1990s, including four times in the NCAA Tournament. The Utes out-rebounded Kentucky 31-23, becoming the first team to top the Wildcats on the boards this season. “That’s one thing we can hang our hat on,” Utah coach Larry Krystkowiak said.

Kentucky: The Wildcats have picked up steam from behind the arc after starting the season slowly. Kentucky has made at least five 3-pointers in each of the past four games. The trend began when Kentucky connected on 10 3s in a 90-44 win over Monmouth on Nov. 28.

The Wildcats dropped 10 spots from No. 9 to 19th following the loss to Seton Hall, but they can begin climbing back toward the Top 10 if they can finish out the month with wins over North Carolina and in-state rival Louisville.

“It could have ended up a different story, but things happen for a reason,” Prickett said. “It was a great experience for me.”

The Wildcats play No. 12 North Carolina in the Champions Classic on Saturday in Chicago.