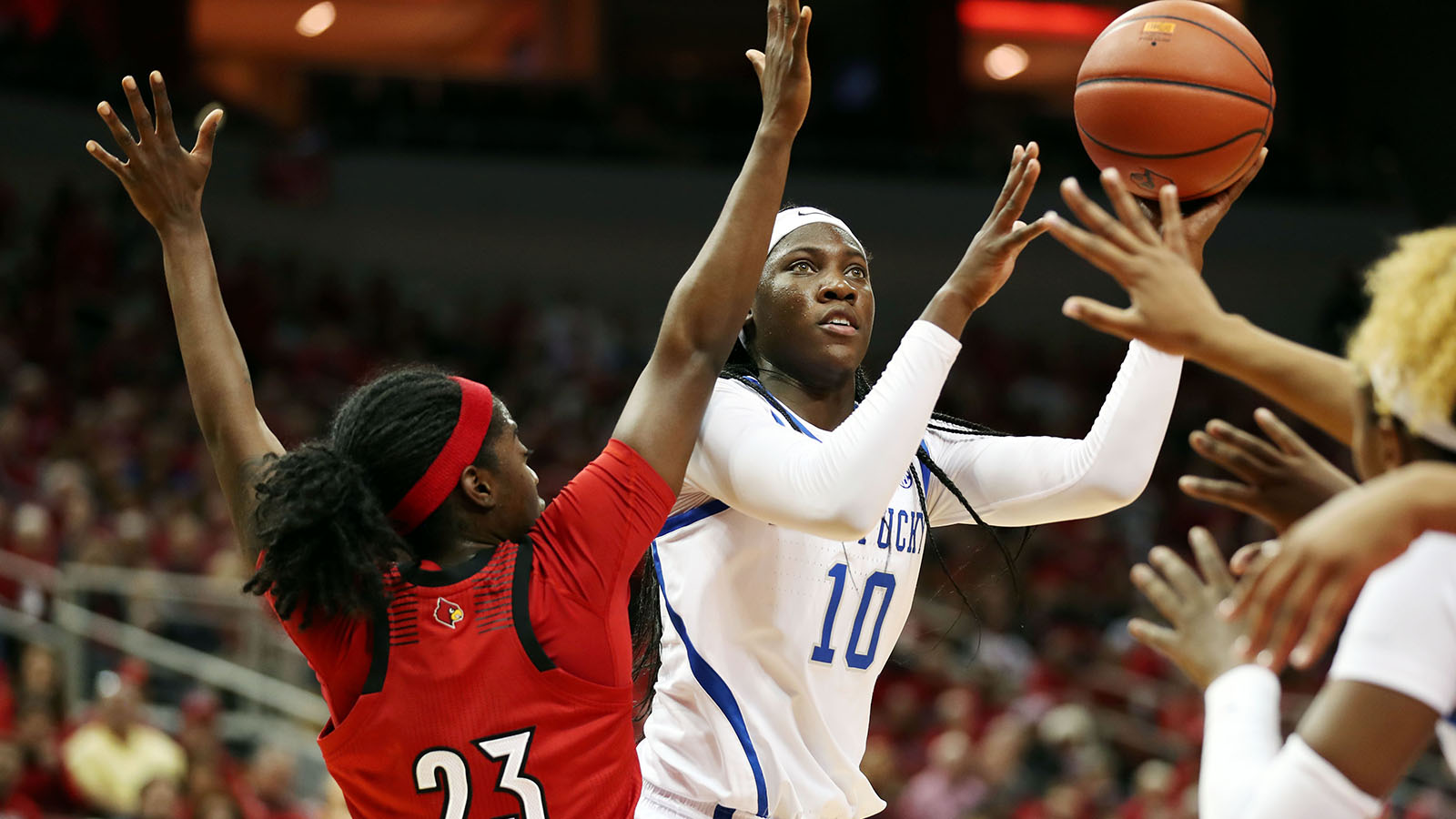 LOUISVILLE, Ky. – Rhyne Howard scored 25 points, grabbed 10 rebounds and dished out a career-high six assists, but the 19th-ranked Kentucky women’s basketball team lost for the first time this season, falling to No. 5 Louisville 80-75 on Sunday at the KFC Yum! Center.

Kentucky (9-1) trailed by as many as 18 points in the game before a late rally came up just short against the highly-ranked Cardinals.

For Howard, it was the 10th straight double-figure scoring effort to start her UK career and her third double-double of the season. Senior Taylor Murray had 18 points for the Cats, while fellow senior Maci Morris added 11.

The Cats held a 32-28 advantage on the boards, and Kentucky scored 20 second-chance points, compared to just six for Louisville. But the Cards protected the ball, which was the difference in the game. Kentucky was forcing 26.9 turnovers per game, third-best in the nation, entering Sunday’s contest. But the Cards only had seven turnovers in the game, and were able to hit 56.4 percent (31-55) of their shots.

Kentucky got on the board almost immediately, with Howard hitting a layup just six seconds into the game. The game would be tied at 2-2, 4-4 and 7-7 before Louisville scored five straight to lead 12-7. But Kentucky answered, with Howard scoring the next six points to give UK a 13-12 lead with 6:17 left in the first quarter.

In the second period, Kentucky was able to cut into the Louisville lead, eventually getting within two points at 26-24. The Cards extended the lead to 30-24 before Murray nailed a three-pointer to cut the lead in half, 30-27, with 4:50 left in the half. But, as they did in the first period, Louisville closed the period well, outscoring the Cats 6-2 the rest of the half to lead 36-29 at the break. Howard led Kentucky with 12 points in the first half.

Louisville (10-0) extended its lead in the third quarter, using a 13-6 run to lead 47-33. U of L would take its biggest lead, 18 points, on two occasions in the third quarter. Kentucky would get within 13 points twice, but the Cards held a 67-52 lead after three periods.

In the fourth quarter, the Cardinals extended the lead to 17 points, 71-54, before the Cats made a furious run. Kentucky scored seven in a row to cut the lead to 71-61 on a layup by KeKe McKinney with 5:45 to play. The Cats would get even closer when Murray drilled a three-pointer from the left corner to make it 73-66 with 3:43 to play.

Kentucky kept chipping away, cutting the advantage to four points on a pair of Howard free throws with 27 seconds left in the game, and again on a runner by Morris with seven seconds left. But the comeback ran out of time before the Cats could catch U of L.

Kentucky returns to action on Saturday, hosting Middle Tennessee at Memorial Coliseum. Tipoff is set for 1 p.m. ET and the game can be seen on SEC Network+.