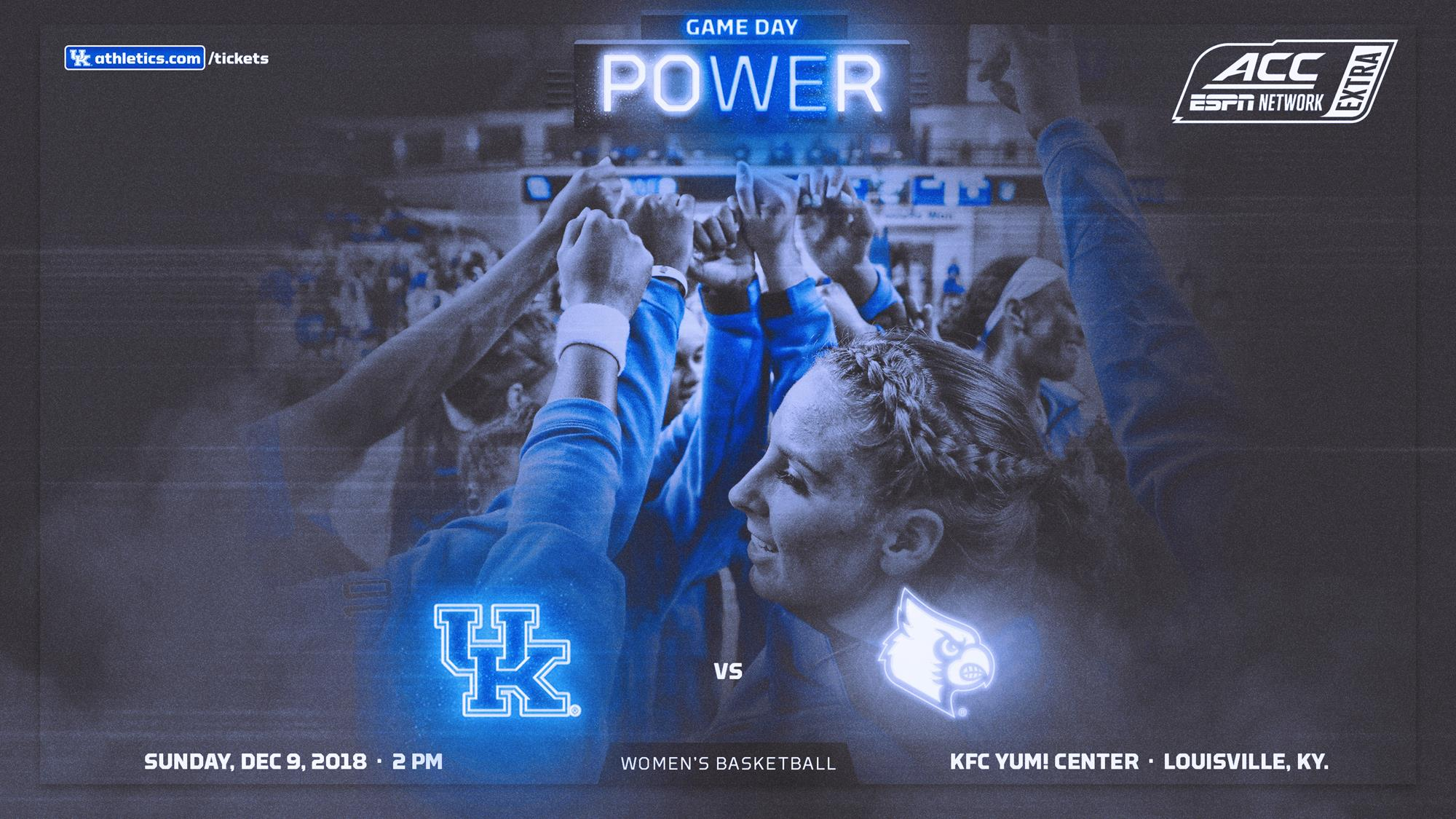 No. 19 Kentucky Travels to Face In-State Rival No. 5 Louisville Sunday

LEXINGTON, Ky. – The No. 19 University of Kentucky women’s basketball team will face its toughest test of the season Sunday when it travels to play in-state rival No. 5 Louisville at 2 p.m. ET inside the KFC Yum! Center in downtown Louisville, Ky.

The game will be streamed on the ACC Network Extra with Don Russell, Sara White and Cortnee Walton on the call. The action can also be seen through WatchESPN on computers, smartphones or tablets. Darren Headrick will have the call on the UK Sports Network on 630 AM in Lexington and 840 AM in Louisville. Live stats and free live audio will be available online at UKathletics.com.

Kentucky (9-0) has jumped up the national rankings to No. 19 in both the Associated Press Top 25 and USA Today/Coaches Top 25 after starting the season unranked. The UK defense has been one of the main reasons for the success limiting teams to just 55.2 points per game and forcing teams into 26.9 turnovers per game. In its first nine games, Kentucky has forced a total of 242 turnovers and scored 268 points off those miscues. The Wildcats’ +13.8 turnover margin is the best in the nation while their 126 steals ranks third nationally and first in the Southeastern Conference.

Louisville is again ranked as one of the best teams in the nation under 12th-year head coach Jeff Walz. The Cardinals sit No. 5 in the Associated Press Top 25 and No. 4 in the USA Today/Coaches Top 25. UofL has started its season 9-0, including a 4-0 mark at home after playing the first five games of the season away from the KFC Yum! Center.

The Cardinals are scoring at a high level this season, averaging 87.1 points per game. UofL has scored 100 or more points three times this season, including each of its last two games with 107 vs. Tennessee State and 102 vs. UT Martin. The Cardinals are shooting an impressive 50.5 percent from the field as a team, including 40.5 from long range. Louisville has a at +4.1 turnover margin this season averaging 16.2 turnovers per game while forcing opponents into 20.3 miscues. UofL is averaging 18.7 assists per game, which ranks 21st nationally.

Senior guard Asia Durr leads the Cardinals by averaging 21.8 points per game, hitting 46.9 percent from the field and 43.5 percent from 3. Durr also ranks second on the team with 32 assists and 15 steals. Senior forward Sam Fuehring is averaging 10.8 points per game hitting 58.6 percent of her shots while leading the team with 6.4 rebounds per game. Redshirt senior guard Arica Carter, junior forward Bionca Dunham and sophomore guard Dana Evans are all averaging nine points or more per game with Evans leading the team with 43 assists.

Kentucky leads the all-time series in games played against Louisville 34-20. The Cardinals hold the all-time record in games played in Louisville 14-11. UofL has won each of the last two meetings in the series, including a 87-63 win last season in Lexington and 69-67 overtime win in Louisville on Dec. 4, 2016. This is the seventh time in the last eight years that UK has faced Louisville when the Cardinals were ranked top 10 in the nation, holding a 4-2 record in those games.

Kentucky holds an all-time record of 54-40 against teams that currently make up the ACC. The Wildcats are 2-0 this season against ACC teams, defeating Virginia in Rupp Arena, 63-51, and North Carolina at the Paradise Jam, 85-75. Louisville is the final ACC team UK is scheduled to play this season.