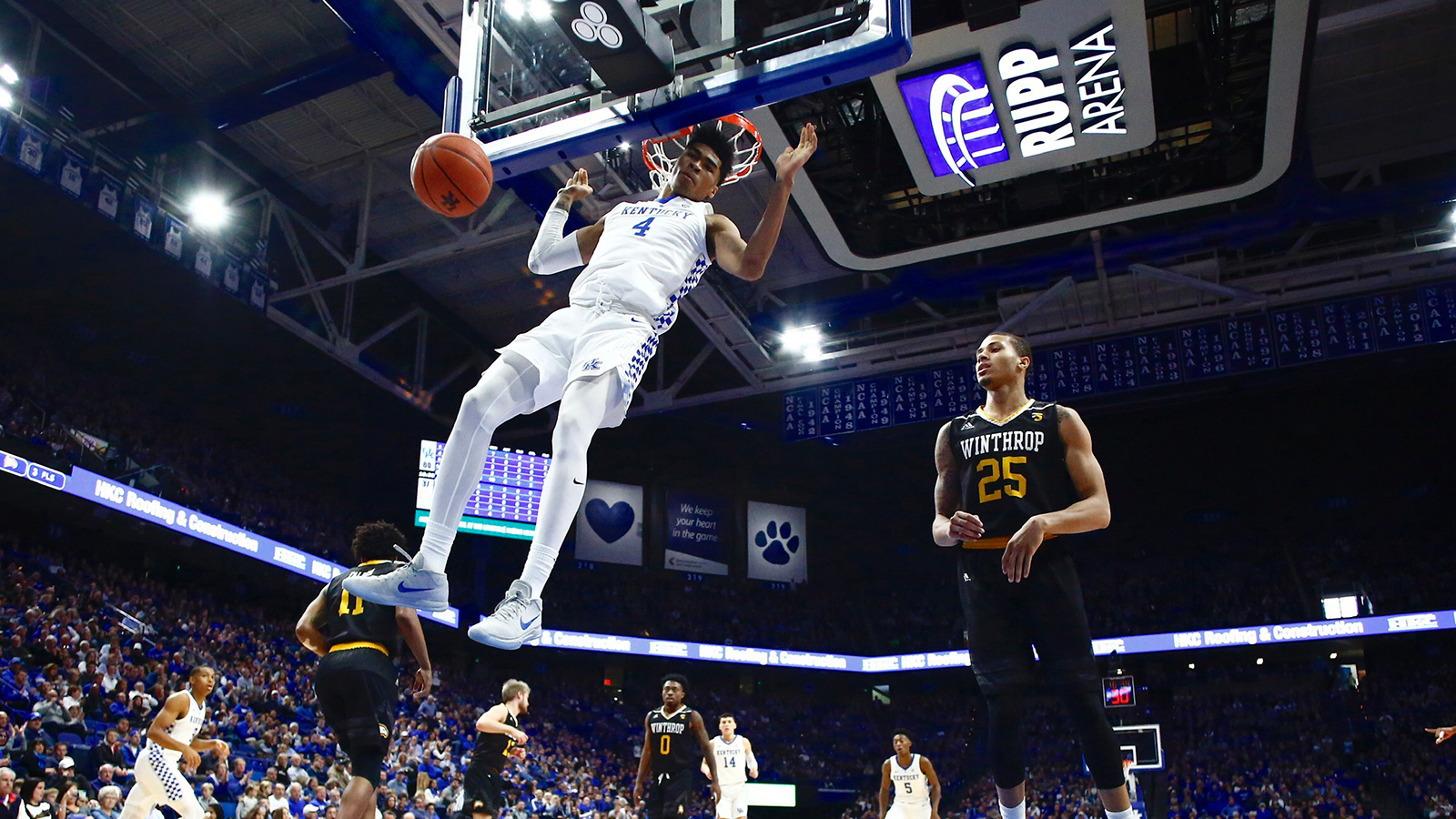 LEXINGTON, Ky. – Of the areas coach John Calipari can fault with No. 10 Kentucky right now, shooting isn’t one of them after the Wildcats’ best performance this season.

More important was that they were accurate early and consistently against Winthrop.

PJ Washington had 19 points and 11 rebounds, Tyler Herro added 15 points and Kentucky shot a season-best 56 percent to run away from the Eagles 87-74 on Wednesday.

Coming off Sunday’s tense victory over hot-shooting VMI, the Wildcats (4-1) had a far easier time against the Eagles (2-3) as they used their size to control the boards 37-20 and scoring in the paint (42-24). An 11-0 run to start the second half helped build a 68-42 cushion with 12:44 remaining and they were never really threatened, though several lapses allowed Winthrop to mount modest runs.

The Eagles never got closer than 13 in the final minutes as the Wildcats got needed plays at both ends of the floor to stay safely ahead.

”We didn’t end the half well,” Washington said, ”and then in the second half we just came out and got stops. That led to fast-break points, some 3s and the intensity was a lot better than how we ended the half. It was great, but we kind of lost it a little bit.”

Washington was the catalyst, making 7 of 11 from the field on the way to his second consecutive double-double. Herro left the game briefly after taking a hard tumble in the first half but returned to make 6 of 14 with three 3-pointers. He also had seven of Kentucky’s season-high 20 assists.

The Wildcats made 31 of 55 from the field, the third consecutive game they’ve shot at least 49 percent. Keldon Johnson added 13 points and seven rebounds, Quade Green had 11 and Nick Richards 10 as Kentucky won its fourth in a row.

”We just started right out of the gate, we were pretty good to get going,” Calipari said. ”There are games where we’re not going to be able to just throw it in and jam it in there. But when you have that as an option and you can shoot the ball the way that we do, it becomes tough.”

Josh Ferguson, Charles Falden and Austin Awad each had 11 points, while Kyle Zunic and Adam Pickett added 10 apiece for Winthrop, which lost its second in a row and fell to 0-3 against Kentucky.

Kentucky has another game on Friday night but shouldn’t lose its Top-10 ranking.

Herro went down hard and rolled over in pain as he lay on the court for several minutes before walking off and going to the locker room. The freshman guard returned for the second half and showed no effects, though he was a little nervous when he fell.

”Honestly, I thought I tore something,” said Herro, who previously had surgery for a torn meniscus. ”It hurt really bad, but it was just the way I fell. I put some ice on it and I was good.”

Winthrop: Outmatched in size by Kentucky, the Eagles found consolation from behind the arc in shooting 13 of 28 (46 percent) and outscoring the Wildcats’ bench 39-27. They shot 54 percent in the second half with six 3s, their only answer to all that length.

”I tell these guys, they block it with their armpit hairs,” Winthrop coach Pat Kelsey said of trying to penetrate against Kentucky. ”Their DNA is to protect the rim, and what we were telling our guys was to spray the ball. You’re not going to finish against trees, against towers in there like that.”

Kentucky: The Wildcats’ perimeter defense still has work to do after Winthrop found long-range success, though it wasn’t like the 19 3s that VMI dropped on them on Sunday. Turnovers were a problem as well, as Winthrop converted 19 miscues into 27 points.

Kentucky hosts Tennessee State on Friday night, looking to go 5-0 against the Tigers.