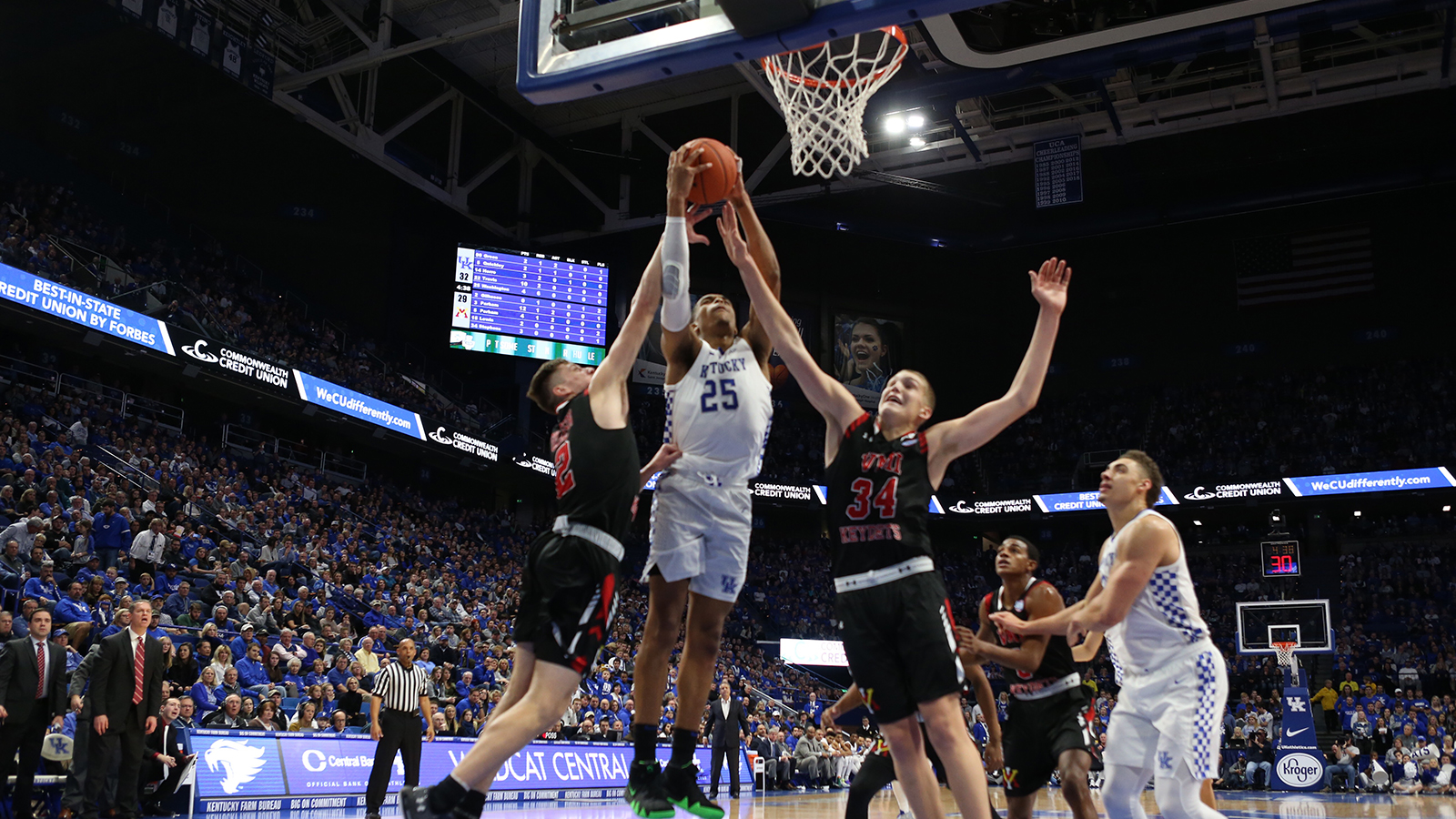 No. 10 Kentucky Holds Off VMI

by Associated Press
Share
LEXINGTON, Ky. – These early weeks haven’t been easy for No. 10 Kentucky, but coach John Calipari sees an upside in how his team is working through growing pains to win.

Perimeter defense will no doubt be a focal point for improvement after Bubba Parham nearly shot VMI past the Wildcats.

Quade Green came off the bench to score a season-high 17 points, including five in the final 90 seconds, to help Kentucky hold off the Keydets 92-82 on Sunday night.

Instead, they ended up being just enough to offset VMI and sophomore guard Bubba Parham. He scored a career-high 35 points and made 10 of the team’s 19 3-pointers, the most ever against the Wildcats. Parham also created late-game anxiety for Kentucky.

Leading by 19 midway through the second half, the Wildcats had to work to put away the stubborn Keydets, who made 12 second-half 3-pointers and got within 85-79 with 1:49 remaining.

“They made five, six, seven shots that you’re like, `dude, that’s almost at half court,” Calipari said of VMI and Parham. “But we had hands down, and we’re talking at every huddle, you have to have your hands up on the guy. But hands were down and the kid was feeling it.”

Green answered with a 3-pointer 19 seconds later and Ashton Hagans made a free throw for a 10-point edge.

Tyler Creammer responded with the Keydets’ final 3 to get within 89-82 before Green made two free throws with 33 seconds left. PJ Washington (19 points, career-high 18 rebounds) made a free throw with 17 seconds left to seal Kentucky’s third consecutive win.

“We’ve always got to find a way to win,” Green said. “They came out on fire tonight because we’re Kentucky. However, we came back with some fire as well.”

Reid Travis matched a season high with 22 points for the Wildcats, who won their second game of the Ohio Valley Hardwood Showcase. That total included 10 in the second half while playing with protective glasses after being poked in the eye in the first.

Parham finished 10 of 16 from long range to double his previous high of five 3s last December against Western Carolina. He also surpassed his previous scoring best of 26 points in January at Chattanooga. Garrett Gilkeson and Creammer each added 13 for the Keydets with three 3s.

“It helps that (Parham) kind of went crazy and made a bunch of shots,” VMI coach Dan Earl said. “I thought we really spread the ball and got some open shots in the second half.”

The matchup was the first between the schools since the Keydets upset the Wildcats 111-103 in the 2008-09 season opener.

Parham seemingly couldn’t miss from where he launched deep shots, to the point that even Kentucky players and fans reacted in amazement. Of the 10 he made, one from near the UK insignia at half court and a high, arcing attempt from the right corner seemed to stand out.

“I’ve been shooting like that for a while now,” Parham said. “Some people call it a rainbow shot, but I practice that each and every day, so it’s my form now.”

Parham scored the most points against Kentucky and in Rupp Arena since Texas A&M’s Elston Turner dropped 40 on Jan. 12, 2013.

Kentucky should maintain its spot in the top 10 despite a win that was closer than expected.

VMI: The Keydets entered the contest having made 25 of 51 3-pointers the past two outings and started hot with 6-of-9 shooting from long range. They couldn’t match Kentucky in the paint or on the boards, and sure couldn’t keep the Wildcats off the foul line. And yet, they were within seven in the final minute before missing the final three from behind the arc.

Kentucky: The Wildcats shot 49 percent and converted frequent chances at the line. They also dominated rebounding and paint and bench points, all of which were needed to offset the Keydets’ perimeter game and Parham.

VMI hosts Kentucky Christian on Tuesday in the first meeting between the schools.

Kentucky hosts Winthrop on Wednesday in the first of two games sandwiched around Thanksgiving.