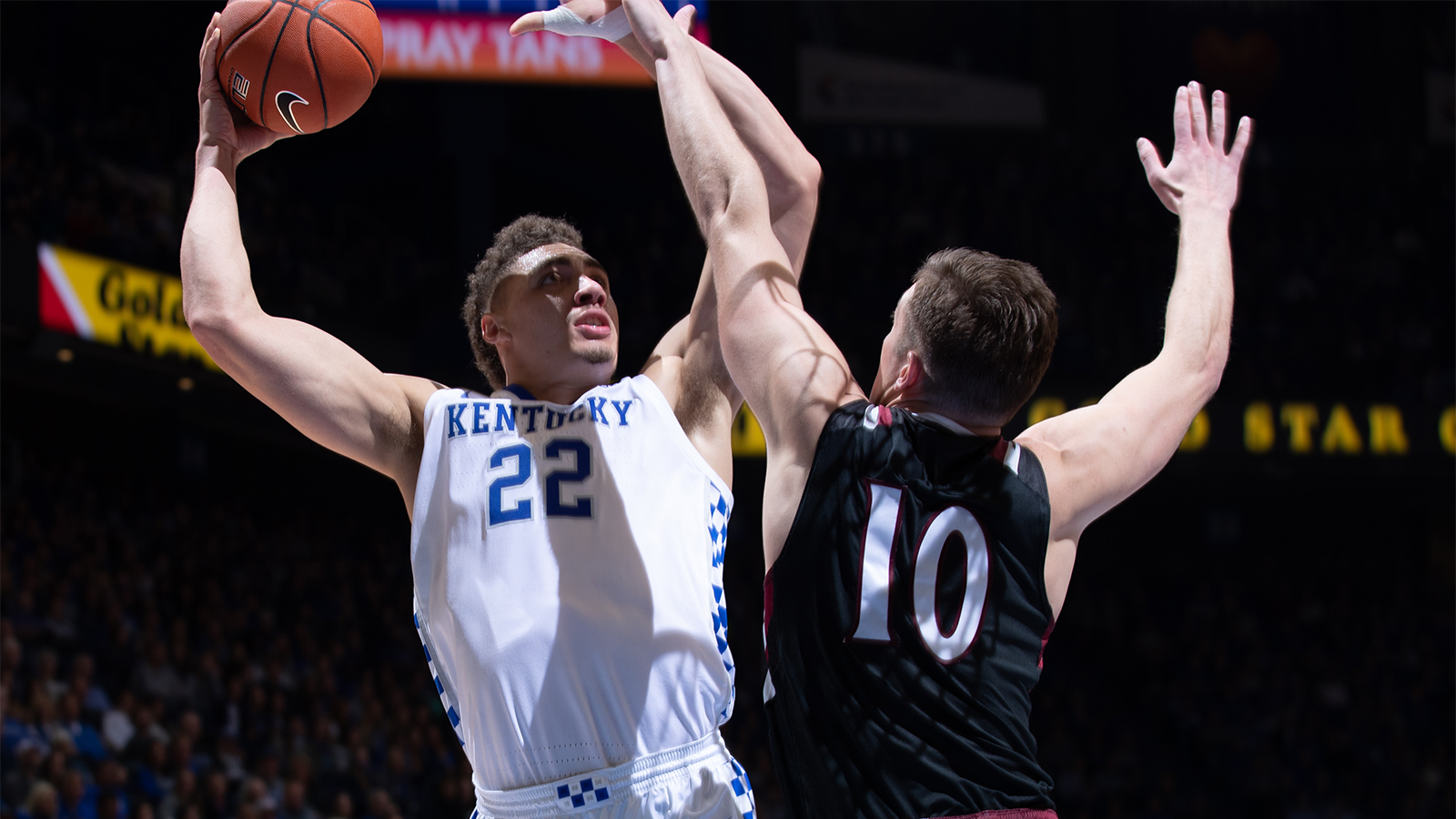 Reid Travis and PJ Washington spend a good portion of their time in practice battling one another.

That’s no easy task for either of them, what with Travis coming off back-to-back All-Pac 12 seasons and Washington spurning the NBA Draft to return for his sophomore season at Kentucky.

When Travis and Washington put on the same color jersey, they form quite the potent front-court duo. So much so that they have their coach thinking about shaping his offense to take advantage.

“This team may be—not that that’s all we’ll do, but this may be a post-up team,” John Calipari said. “said. “So then we’ll play to our strengths. We’ll make people figure out if they’re trapping or how they’re going to play these guys.”

Travis and Washington were the key cogs as UK overcame a fearless IUP squad in the Wildcats’ second and final exhibition on Friday night in Rupp Arena. Behind their combined 42 points and 20 rebounds, UK pulled away in the second half for an 86-64 victory.

Coming in, he was somewhat of a known commodity. After all, he had performed at an All-Pac 12 level and averaged close to a double-double each of the last two seasons at Stanford. Coach Cal might have known he was getting in Travis, but it’s still undoubtedly been good to see that in action.

Travis finished with 22 points and 14 rebounds – his second double-double in as many exhibitions –drawing the attention of IUP head coach Joe Lombardi.

“Reid Travis, holy cow,” Lombardi said. “I’m just glad, to be honest with you, that nobody got hurt. If (Kentucky football) Coach (Mark) Stoops was here, he’d probably want to stick him in the middle of the line tomorrow. He could be a run stopper tomorrow, I know that much.”

Travis will focus on being a board crasher instead.

Washington didn’t rebound quite at Travis’s level, but he did score 20 points on 8-of-9 shooting – including 1 of 2 from 3-point range.

“I thought PJ played well,” Calipari said. “PJ did some good stuff and made free throws and would have liked to have seen him rebound a lot more, but if you watch that team they did a terrific job of blocking out. That’s the team that you could tell one of their things is the shot goes up, you’re getting your man, and everybody blocks their man out. That’s how they played.”

Indeed, IUP was no pushover. A veteran team that went 22-8 a season ago, the Crimson Hawks did not back down after UK built an early 16-point lead. That kind of challenge, with what’s looming for the Cats, is exactly what Coach Cal’s team needed.

“We’ll build and we’ve got a couple days to prepare for this next, which is going to be a hard game,” Calipari said.

Hard, yes, but also welcome. After months of practices, four exhibitions in the Bahamas, Big Blue Madness, the Blue-White Scrimmage and now two more exhibitions in Rupp, the season is almost here. Tuesday’s Champions Classic tussle will pit a UK team ranked second in both preseason polls and a No. 3/4 Duke squad.

“The mood’s a lot of excitement,” Travis said. “We’ve been taking it game by game but now obviously we’re jumping into real games. There’s just a lot of excitement in the locker room. We all want to get better. We all want to get back on the court tomorrow and just work on things I feel like we didn’t do well this game and just continue to prepare, continue to grow.”