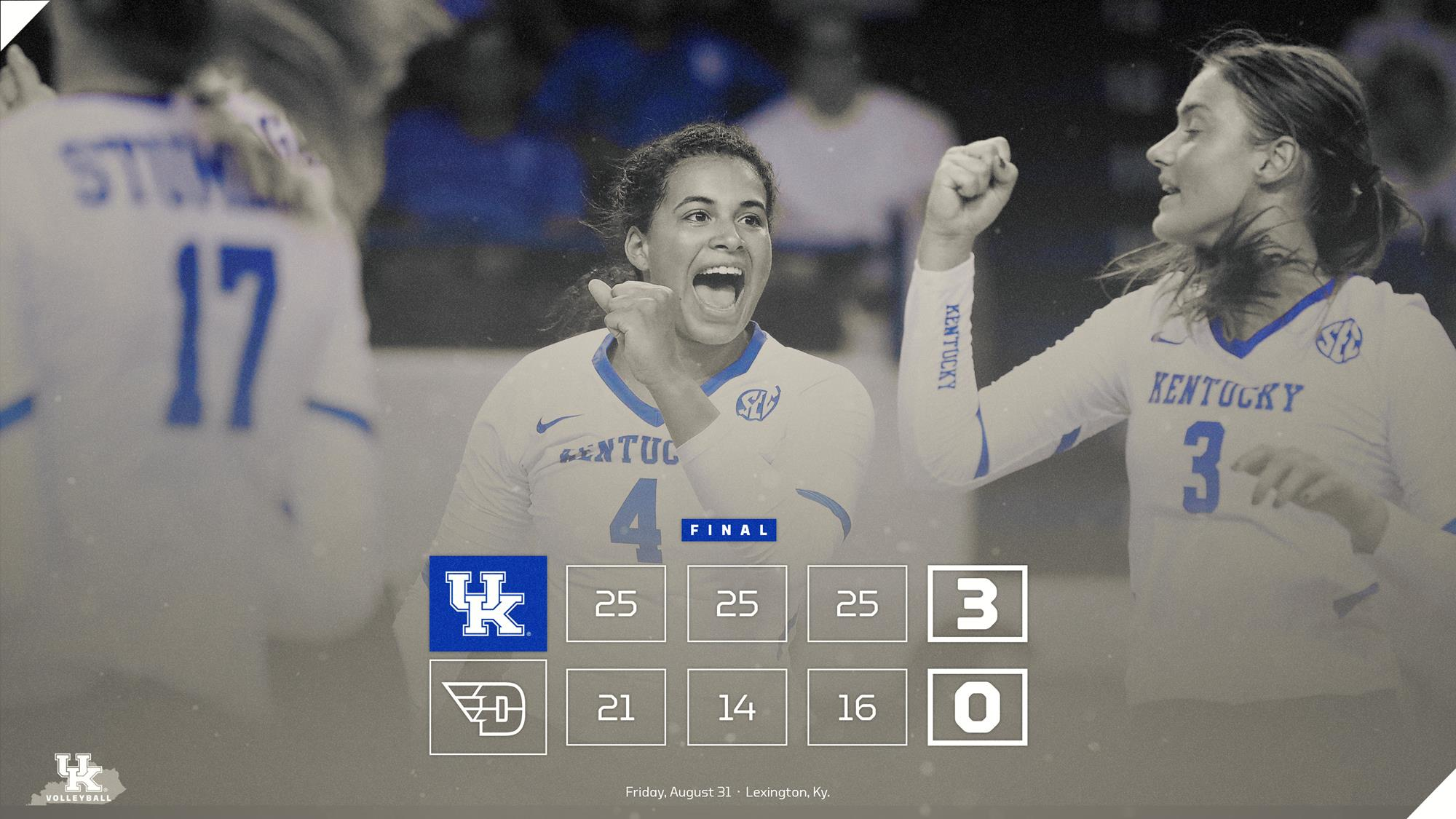 LEXINGTON, Ky. – Led by a sparkling offensive performance the No. 16 Kentucky volleyball team cruised to a 3-0 (25-21, 25-14, 25-16) win over visiting Dayton on Saturday evening. The Wildcats boasted 54 kills on a sizzling .451 hitting percentage with four players totaling nine or more kills and all utilizing a .370 attacking percentage or better in the win.

“I’m really pleased with how efficient we were and how we played defense,” head coach Craig Skinner said. “Our first contact was really effective to get Madison (Lilley) the ball and get all of our hitters involved. It was a great night offensively.”

Kentucky improves to 2-3 on the season with two wins in today’s Bluegrass Battle. Dayton falls to 3-1 on the season. UK resumes play in its home-opening round-robin tournament with a 7 p.m. matchup against Kansas on Saturday. Fans can tune into to see the Cats via Watch ESPN. Dayton will be back in action against College of Charleston at 1 p.m. inside Memorial Coliseum.

Sophomore setter Madison Lilley directed the UK offense to its best performance in the early stages of the season with 45 assists as the Cats displayed balance, versatility, consistency and dominance in tonight’s win. Junior Leah Edmond had a match-high 16 kills on .419 hitting, while senior Brooke Morgan and freshman Alli Stumler both totaled 11 kills. Morgan boasted a .550 hitting percentage and Stumler had a .370 clip. Sophomore Avery Skinner added nine kills on a .538 percentage.

Defensively, senior McKenzie Watson had a season-high and team-best 13 digs. Sophomore libero Gabby Curry added nine digs, while Edmond and Stumler both contributed six apiece. Morgan and Lilley teamed up for a trio of blocks.

SET 1
Morgan opened the scoring with a slicing kill off a quickset from Lilley. Dayton matched the kill on the next play and from there the teams would trade points until the Flyers shook loose for four straight and a 10-6 advantage. UK opted for a timeout to attempt to spell the spurt. Out of the break, the Cats posted four straight points capped by an Edmond smash from the back row to even the score at 10 apiece. Play would seesaw again until the Flyers built a multi-point lead at 13-11. Kentucky knotted the score back up at 13 to set up another back-and-forth affair.  Consecutive kills from Stumler and Morgan gave the Cats a late set lead at 19-17 forcing the Flyers to take their first timeout. Out of the stoppage, Stumler brought the crowd to its feet with another kill from the left side to lift the home team to a three-point edge. Stumler’s ace that nicked the net pushed the lead to four at 22-18. Dayton burned its final timeout down 24-19 following Edmond’s third kill of the frame. Edmond tooled the block to finish off the set-opening win for the home team at 25-21 and a 1-0 lead in the match. Stumler led the way with five kills on a .385 clip and Watson amassed seven digs.

SET 2
Lilley called her own number to get things going in the second stanza with a kill. Stumler followed suit with another kill before Dayton got on the board. Kentucky maintained its edge and eventually increased its lead to five following four-consecutive kills from Edmond, Stumler and Paris at 7-2. Dayton chose to take an early timeout with the Cats seeming to find their offensive rhythm. Dayton’s timeout stymied the run and prompted a 2-0 spurt by the visitors to close the gap to three. From there the teams would exchange points until back-to-back errors by the Flyers was followed by another backrow kill from Edmond and an ace from UK’s junior star that helped pushed UK’s advantage to six at 11-5. Dayton managed to trim the lead to four at 13-9, but Kentucky quickly responded with another run to stretch the lead to eight at 17-9. The string of points generated another timeout by the visitors. Following the timeout, Edmond drilled a pair of kills, Morgan and Lilley teamed up for a Big Blue Block and the Flyers committed a ball-handling error moving the score to 21-9 in favor of UK. It was more than enough breathing room for the Wildcats as they finished off the frame behind a 25-14 score following a kill from Stumler. Edmond carried the load with nine kills in the set, while Watson led the way defensively with four more digs.

SET 3
For the third time in the match the Cats scratched the scoreboard first as Lilley and Morgan hooked up for the first two points of the set and then Stumler followed with a pair of kills of her own. UK’s excellent start continued as Lilley and Morgan teamed up for a block to move the score to 5-0 to open the stanza. The Flyers did not go away though, as the visitors rallied to pull to within three at 7-4. Three straight kills from Skinner gave the Cats a seven-point cushion at 12-5. UK held that advantage at the media timeout and a 15-8 score. There was no slowing the Blue and White down as the Cats continued to roll increasing their lead to eight at 19-11 behind an Anna Nyberg kill. Kentucky earned its first sweep of the season when Morgan converted off the slide for a 25-16 win.